Cinematic Spillover: Short Reviews of Ready or Not, The Peanut Butter Falcon, David Crosby and More

Here are a few short reviews of movies that were released in San Antonio theaters this week. The Nightingale (3.5 out of 5 stars) also opens locally on August 23. A full review will run online and in print next week. We’ll also look at a film we missed last Friday that is currently playing at theaters. 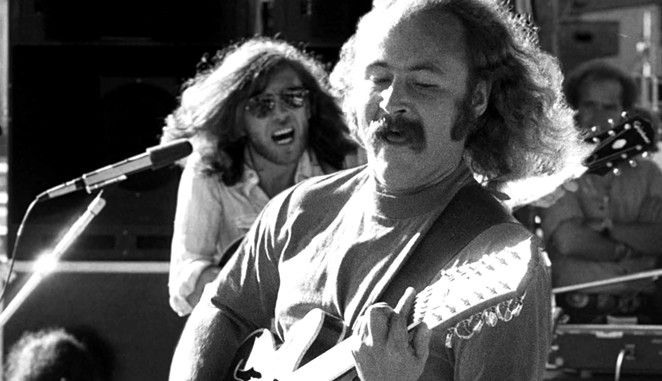 Sony Pictures Classics
It’s 2019 and, against all odds, singer-songwriter David Crosby is still alive. It’s a somber concept at the center of David Crosby: Remember My Name, a candid documentary on the unstable life and career of its title subject – one of the founding members of The Byrds and Crosby, Stills & Nash. First-time director A.J. Eaton taps into Crosby’s mind as he contemplates the mistakes he’s made in his life, mortality, addiction, the friends and lovers he’s lost along the way and his contribution to the musical counterculture of the 1960s. Like the documentary Echo in the Canyon from earlier this year, the best footage comes when Crosby is front and center telling both funny and tragic stories about his past and exorcising his demons. “Every minute that you get is precious,” he says. “Time is the final currency.” As a documentarian, Eaton plays it straight – allowing Crosby’s words to direct the narrative and giving him a platform to speak from the heart. Most importantly, the film is not an exercise in hero worshiping. Crosby’s warts are visible for all to see. While it’s unknown if a project like Remember My Name can move some people to reconnect with Crosby (he’s burned a lot of bridges in the last half century) and make amends, the doc makes a good argument for why they should. In the end, Remember My Name feels a lot like the 2014 music documentary Glen Campbell: I’ll Be Me – a touching farewell to an exceptional talent. David Crosby: Remember My Name opens exclusively at the Santikos Bijou Cinema Bistro August 23. 3 out of 5 stars (recommended)

Neon
Anchored by a solid ensemble cast, the dramatic tension hits a few boiling points in Luce, a smartly-written and compelling story that challenges its audience to take a step back and consider the consequences of certain characters’ actions. Actor Kelvin Harrison Jr. (Mudbound) stars as the title character, an exceptional high school senior with a supportive mother and father, Amy and Peter (Naomi Watts and Tim Roth), and a bright future ahead of him. That wasn’t always the case. Ten years prior, Amy and Peter adopted Luce from a war-torn African country where he saw things no child should ever witness. Although his life has completely changed, one of Luce’s teachers, Harriet Wilson (Octavia Spencer), expresses concern when Luce turns in an assigned essay about the benefit of political violence. From here, Luce plays out like a suspenseful thriller – one that distorts the truth and questions the idea of trust between parents and children. Although filmmaker Julius Onah completely crashed and burned with Netflix’s The Cloverfield Paradox last year, there’s no remnants of that style of direction anywhere. Luce is an enlightening experience that pushes its uncomfortable narrative to some of the most thought-provoking places of any movie this year. Luce opens exclusively at the Alamo Drafthouse Park North August 23. 3.5 out of 5 stars (recommended)

Roadside Attractions
The high school literature vibe is strong with first-time feature film writers/directors Tyler Nelson and Michael Schwartz’s adventure dramedy The Peanut Butter Falcon, an obvious homage to Mark Twain’s “The Adventures of Huckleberry Finn.” While Nelson and Tyler don’t delve deep into the same themes of the classic novel (with the exception of the characters’ quest for freedom), Nelson and Schwartz create a sweet albeit sometimes sappy friendship between lead actors Shia LaBeouf (American Honey) and first-time actor Zack Gottsagen. Gottsagen, who has Down syndrome, stars as Zak, a young man abandoned by his family, thus becoming a ward of the state. North Carolina officials aren’t sure where to place him, so they move him into a retirement home where he is befriended by social worker Eleanor (Dakota Johnson). After more than two years, however, Zak, doesn’t want to live there anymore. He wants to go to a wrestling school in Florida where his favorite pro-wrestler Salt Water Redneck (Thomas Haden Church) coaches. After escaping the home and stowing away on a boat, he meets Tyler (LaBeouf), a crab fisherman on the run after he destroys the crab pots of some shady competitors. Going the same route down the East Coast, the two men form an authentic bond rooted on their shared loneliness and desire to live without limitations. The Peanut Butter Falcon might be a easygoing buddy road movie on paper, but the care that Nelson and Schwartz give these individual characters, especially Zak, is more endearing than most. Dramatically speaking, it’s a little lightweight, but the chemistry between Gottsagen and LaBeouf is pro-level rapport. The Peanut Butter Falcon opens exclusively at the Santikos Bijou Cinema Bistro August 23. 3 out of 5 stars (recommended)

Fox Searchlight Pictures
Contrary to what a filmmaker like Jordan Peele has given audiences early in his career with Get Out and Us, not all horror-thrillers have to say something meaningful to prove their worthy of their celluloid. Sometimes all you really need are a few hacked-off appendages or someone’s head in a vice to get the heart pumping, amirite? Ready or Not is a strange hybrid of both approaches. It presents itself as another horror-comedy like You’re Next or Tucker and Dale vs. Evil, but then it pulls its punches as a social commentary. Ready or Not wants it both ways, but screenwriters Guy Busick (Urge) and first-timer Ryan Murphy just don’t have a strong enough script to keep the story consistently entertaining, funny and even a little provocative. The film follows Grace (Samara Weaving), a bride who has married into the affluent De Loma family. The De Lomas are an eccentric group of 1-percenters who aren’t sold on Grace fitting into their lifestyle. She may not even get the chance to try when, on her wedding night, she is forced to play a sadistic game of hide and seek where her family attempts to hunt her down inside their mansion before the sun rises. With crossbows, axes and old revolvers in hand, the De Lomas spread throughout the house as Grace does her best to stay hidden and counter their attacks, all while her husband Alex (Mark O'Brien) decides if he really wants to become a widow before his honeymoon. It’s evident Busick, Murphy and co-directors Matt Bettinelli-Olpin (V/H/S) and Tyler Gillett (Southbound) have a kernel of an idea ruminating in their heads about classism and the power of the elite, but they simply can’t find a way to develop it into a worthwhile narrative. The movie flirts with big concepts and then flakes out. Still, the buckets of blood might be enough for most horror fans to wash away any disappointment by the lack of insight it pretends to convey. Ready or Not opened nationwide in theaters August 21. 2.5 out of 5 stars (not recommended)
Where'd You Go, Bernadette 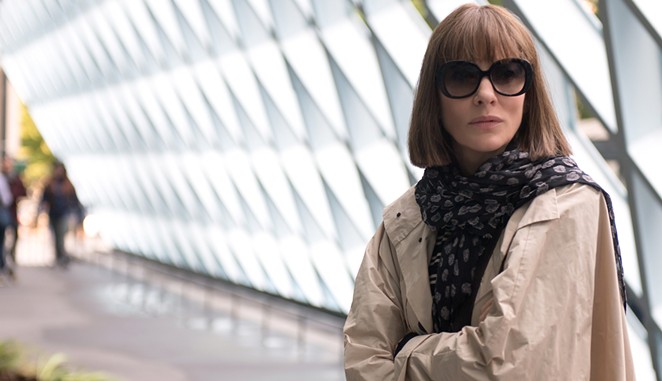 Actress Cate Blanchett knows how to play neurotic characters well. She’s actually won two Oscars for doing so. From her role as Katharine Hepburn in Martin Scorsese’s 2004 biopic The Aviator to her role as a manic New York socialite in Woody Allen’s 2013’s Blue Jasmine, Blanchett can push herself to the edge without losing her grip on reality in the process. She does the same as the title character in Richard Linklater’s Where’d You Go, Bernadette, although to a less effective degree. Based on a 2012 novel of the same name by Maria Semple, Linklater’s film explores the life of title character Bernadette Fox, a wife, mother and former architect who loses her shit one day and escapes out of a bathroom window after her husband (Billy Crudup) sets up an intervention to confront her about her emotional problems. The first half of Bernadette, when she spirals out of control, is intriguing enough, especially with Blanchett playing a mom and trying to keep her family life from imploding. Once she goes AWOL, however, Bernadette loses its way. It’s ironic that the last half of the film maps out a concrete final destination (Bernadette wants to get to Antarctica), but is so thematically directionless. Linklater seems to want to say something about the creative process for an artist and how an artist needs it to feel alive, but once he lets the audience in on the concept, the end credits start to roll. Where’d You Go, Bernadette hit theaters nationwide August 16. 2.5 stars out of 5 stars (not recommended)