Evanescence comes back strong while keeping Jesus (mostly) out of it 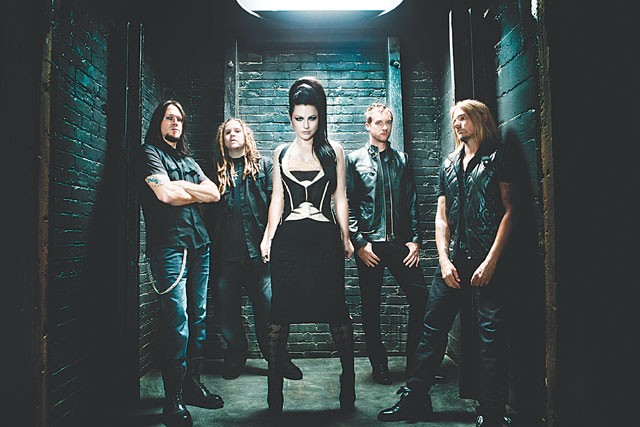 Courtesy photo
Amy Lee is still at the center, but Evanescence is a group effort.

Suuuure… It was all “a misunderstanding,” as Evanescence singer/main force Amy Lee says of the band’s Christian identity of yesteryear. Never mind that she met former boyfriend and bandmate Ben Moody at a Christian summer camp, and that the band’s 2003 debut, Fallen, was heavily worked in the Christian rock circuit, or that the stunning sounding and looking Lee’s haunted lyrics could apply to both boys and God. But a month after Fallen came out, all hell broke loose.

“There are people that are hell-bent on the idea that we’re a Christian band in disguise, and that we have some secret message,” Lee told Entertainment Weekly in April 2003. “We have no spiritual affiliation with this music. It’s simply about life experience … I guarantee that if the Christian bookstore owners listened to some of those songs, they wouldn’t sell the CD.”

“I’m not ashamed of my spiritual beliefs, but I in no way incorporate them into this band,” he said. “We’re actually high on the Christian charts, and I’m like, ‘What the fuck are we even doing there?’”

Did he say “fuck?” Yes he did, and Christian stores promptly removed Fallen from their shelves. Not that it mattered: to date, Fallen (which peaked at #3 in the Billboard charts) has sold more than 17 million copies worldwide and Evanescence won two Grammys, including Best New Band.

Days before the band visits San Antonio to present its first album in five years, Evanescence, Lee insists they didn’t “betray” anyone.

“I am a Christian, and I’m proud of being a Christian,” she told the Current over the phone, “but this has never been a ‘Christian band.’”

Besides, she had more pressing things to attend. In the middle of the 2003 tour, Moody abruptly left the band due to creative differences (he wanted a more commercial direction while she remained adventurous, the story goes), but Lee was unfazed.

“We didn’t cancel a single show,” she said with typical bravado. “He left in the middle of the tour, we had one day to have a little bit of rehearsal in, change the setup a little bit, and we handled it. We played the rest of the tour as a four-piece and had all sold-out shows. We were just different, people grow apart creatively and personally. It just wasn’t working between us anymore.”

With Lee firmly at the helm, 2006’s The Open Door reached number one. Then it was time to take a break. The Fallen success came when Lee was only 21, and it took its toll.

“Part of the reason we’ve been gone for the past few years is that I needed to step away from it,” Lee said. “It’s a very consuming thing. I love this band, but it really can consume your identity a little bit, and for me that was the case. I was feeling, ‘I’m the girl from Evanescence, with all these expectations and responsibilities all day long, every day, for the past 10 years, and I just need to be Amy, I need to be human, I need to feel … normal.’”

Evanescence marks the first time the band releases an album without any lineup changes. Despite postponements (the original Steve Lillywhite sessions were scrapped and the quintet opted to work with producer Nick Raskulinecz of Foo Fighters, Alice in Chains, and Rush fame), the release is a solid comeback — trading on Lee’s usual larger-than-life voice, crisp production, ferocious goth-metal guitars, strong melodies, and epic choruses. It is an album filled with clear singles and, in Lee’s opinion, the best in the band’s career (read our review next week).

“This is the same band that was on tour for The Open Door, and we all feel this is the strongest that we’ve been,” Lee said. “It feels like a rebirth, is the best Evanescence-as-a-band album, it’s not just me. We’re very, very grateful to our fans for standing by during all this, even growing with us. It’s a special time and it feels like a new day.” •