How to choose a COVID-19 vaccine booster shot 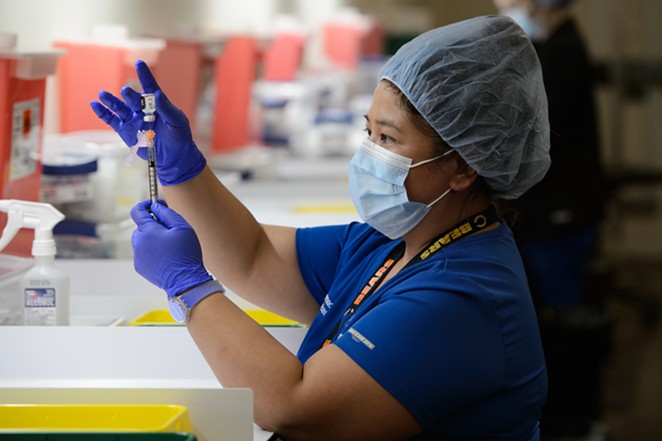 Courtesy Photo / University Health System
A health worker prepares a syringe at a San Antonio vaccination clinic.
It’s been a little over six months since I got my second dose of the COVID-19 vaccine from Pfizer and its German partner BioNTech, and a phone call from my state health department over the weekend reminded me that I am eligible for a booster. But do I really need to get a third COVID-19 shot? If so, which of the three authorized or approved vaccines available in the United States should I get? To make my decision, I looked at the evidence and talked to some experts. What I found out could be useful to anyone deciding on a booster.

Let’s start with Johnson & Johnson. Everyone who got that shot as their initial vaccine is recommended to get a booster two months after the first jab, U.S. health officials and experts say (SN: 10/19/21). That’s because the antibody response from that one-dose vaccine isn’t as high as for the two-dose mRNA vaccines from Pfizer and Moderna, and it is waning. “It doesn’t go away entirely,” says Sachin Nagrani, medical director of Heal, a company that provides primary health care in people’s homes via telehealth visits and house calls. But a few months after the J&J shot, “it seems like your immune response is less protective.”

There are few studies on J&J boosters, but the AstraZeneca vaccine, which is built on similar technology but not available in the United States, could provide some clues (SN: 11/23/20; SN: 2/27/21). Both vaccines use adenoviruses to deliver DNA instructions for building the coronavirus’s spike protein to cells. Studies show combining AstraZeneca’s COVID-19 vaccine with a boost from the Pfizer shot (or sometimes Moderna) was more effective than getting another dose of AstraZeneca.

A preliminary study that mixed and matched vaccines in the United States found that people who got J&J as their first dose developed much higher levels of antibodies if their second dose was an mRNA vaccine than if it was another jab of J&J. Those data suggest that people who got vaxxed with J&J should consider getting an mRNA booster.

On November 19, the U.S. Food and Drug Administration authorized mRNA boosters for everyone 18 and older. Some states were already allowing all adults to get boosted prior to the FDA decision. An advisory committee for the U.S. Centers for Disease Control and Prevention gave its unanimous blessing and CDC director Rochelle Walensky signed off on the expanded recommendations later that day. But some experts question whether the additional doses are really necessary for most people.

I considered risk factors before deciding whether I needed the shot. When I was contemplating my choice, boosters were recommended for people 65 and older, who are at risk of severe illness and death from COVID-19. I’m younger than that and fall into the CDC panel’s recommendation that people 50 and older should get a booster. Those in the 18- to 49-year-old age group may get a third dose but don’t necessarily need an additional shot the way I and other middle-aged and older people do. People who have a high chance of getting exposed to COVID-19 through their jobs or living situations have also been advised to get a booster. But right now I work from home, where just my husband and I live. People with certain underlying health conditions are at greater risk of severe disease. I do have a couple of health conditions that make me more vulnerable. But how much more benefit would I get from a booster shot than from the two doses I already received?

Much of what we know about mRNA booster shots comes from data collected in Israel, where everyone 12 and older has been eligible for a third dose of the Pfizer vaccine since the end of August. People who were fully vaccinated with two doses of the vaccine and had no underlying health risks, had a very low chance of developing severe COVID-19 or needing to be admitted to a hospital: Just 3.1 of every 100,000 healthy people who had gotten two doses of vaccine got severe disease, researchers reported October 29 in the Lancet.

But with underlying health risks, that number started to climb. Of every 100,000 fully vaccinated people with one or two health risks, 82 developed severe disease. And with three or more health risks, the rate was 503.5 of every 100,000 people. Getting a booster dropped the severe disease rate for those with one or two health conditions to 3.2 per 100,000 and cut the rate by about 90 percent — to 51.6 per 100,000 — for those with three or more health conditions. That evidence leads me to think a booster is in order for me.

For young, healthy people the risk equation may be different. Nagrani says it’s OK for people in that situation to wait a while for more data on the vaccine’s longevity before getting a booster. But people 65 and older and those with health conditions or who live in assisted-living facilities should probably get a booster now.

The next question is which shot should I get? It’s now fine to mix and match vaccine doses for booster shots. I could stick with Pfizer, or switch to Moderna or J&J. The first thing I’m considering is: What’s my goal? While I would like to not get infected with COVID-19 at all, that’s maybe not so realistic. None of the COVID-19 vaccines produce “sterilizing immunity,” which protects you from getting infected. But they all provide protection against illness.


At first glance, it looks as if the mRNA vaccines are the way to go, but I’ve been intrigued by discussions in the recent FDA and CDC advisory board meetings about different types of immunity produced by the vaccines. The mRNA vaccines give gangbuster levels of neutralizing antibodies, which help keep the coronavirus from infecting cells. But adenovirus-based vaccines like J&J’s and AstraZeneca’s seem to be better at revving up long-lasting protection from immune cells called T cells. And some evidence suggests that a combo of an mRNA vaccine with an adenovirus-based vaccine like J&J’s could have some advantages.

In a study in France, participants got either two doses of the Pfizer vaccine or a dose of AstraZeneca with a Pfizer chaser. People who got Pfizer for both doses were twice as likely to get infected with the coronavirus as those who got the mixed doses, researchers reported October 21 in Nature. That was 10 infections among the 2,512 (0.39 percent) who got the mixed doses, compared with 81 infections among the 10,609 people (0.76 percent) who got Pfizer alone.

I asked one of that study’s coauthors, Jacqueline Marvel, an immunologist at the International Center for Infectious Disease Research (CIRI) in Lyon, France, about whether I should switch to J&J for my booster shot to give my T cells a lift or stick with an mRNA vaccine. “I’m not sure you want to change the vaccine just for increasing the T cell response,” she said. That answer surprised me a little because Marvel studies T cells for a living.

“I’m pro T cell,” she said. But “neutralizing antibodies are what you want to have first. The antibodies stop the virus from getting into the cells and protect you much earlier than the T cells would,” Marvel explained. “If people don’t want to be ill and have symptoms, you want the antibodies.” And to maximize antibodies, the mRNA vaccines are the way to go.

Side effects from the booster doses are similar to those experienced from earlier doses, though some data suggest the effects after a booster may be milder than after the second dose. Some people are worried about rare side effects such as myocarditis, an inflammation of the heart muscle, that has sometimes happened after an mRNA dose, particularly for young males after the second dose. But that side effect is uncommon: Just 17 out of 2.5 million people who got a Pfizer booster shot in Israel developed myocarditis or pericarditis, Israeli health officials reported (SN: 10/19/21). I’m not a young man and my first two doses produced only a sore arm, so side effects aren’t a big concern for me.

All of this convinced me to get an mRNA shot. But which one? That decision came down to convenience. I got online and searched for places where I could get my booster. It turns out that few of the grocery stores, pharmacies or other vaccine providers in my area offer the Moderna vaccine (even fewer have the J&J shot), but Pfizer doses are plentiful. So I got a Pfizer booster in my right arm and a flu vaccine in the left. (It’s safe to take both at the same time.) According to the CDC, I’m not alone. Almost 99 percent of people fully vaccinated with Pfizer also chose Pfizer for their booster.

My arms might ache for a little while, but that’s a price I’m more than willing to pay to avoid severe illness for myself and to help protect those around me from getting infected.