Mother Mother, one of the hottest bands from the Great White North 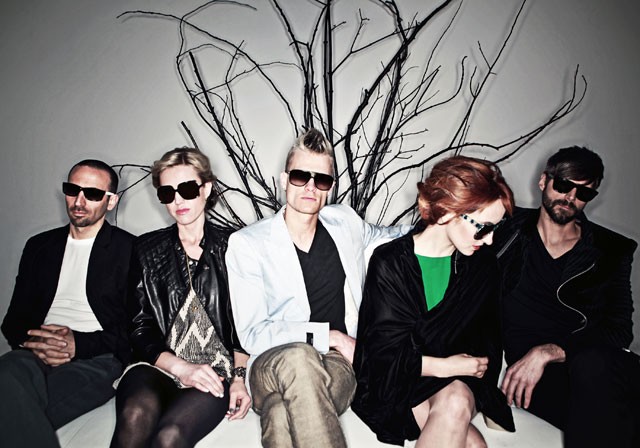 While U.S.-based press on Mother Mother, who open for AWOLNATION at the White Rabbit March 9, might be slim, our neighbors to the north increasingly appreciate the band’s genre-bending rock. The Vancouver, B.C.-based fivesome’s latest album, The Sticks, and their previous effort, 2011’s Eureka, both charted in the top 20 for albums and top five for singles on Canada’s music charts and last year the band was nominated for Best New Group in Canada’s Music Awards, known as the Junos. Their live shows continually sell-out top venues across the country. So ubiquitous are they that the backlash has already begun among Canucks, with an Edmonton Journal columnist hilariously proclaiming, “If it wasn’t for Nickelback, Mother Mother might be the most hated band in Canada.”

But while Nickelback revels in its sonic sameness, Mother Mother ping pong from precious folk to jazz-inflected pop to moody rock anthems, often all in the span of one album. Songwriter Ryan Guldemond (guitar), his sister Molly (synth), and Jasmin Parkin (keys) provide the eerie harmonic vocals, which veer from affectless to full-throttle depending on the song. Jeremy Page offers a rather unusual combo of bass guitar and saxophone, and Ali Siadat nimbly holds Mother Mother’s disparate parts together on drums and layers in electronics. Three of the members met while in music school for jazz, and the learned obsession with precision and adaptability infuses every song. Beside Mother Mother’s instrumental smorgasbord, Guldemond is known for his biting lyrics. His wicked wordplay and je ne sais gofuckyourself are most present on The Sticks, released stateside last month. The concept album contemplates nothing short of complete societal collapse, which nicely dovetails with tourmates AWOLNATION’s worldview.

On the first day of their tour, I spoke with drummer Ali Siadat about San Antonio’s prestigious designation as a mop-up tour stop and the drawbacks of onstage banter.

In Texas, you’re going through Lubbock, San Antonio, and Corpus Christie, but you’re skipping some of the bigger cities. Are you excited to see some of these markets?

Very much so. That’s part of the charm of the tour for us. We’re the openers for AWOLNATION, and often times these larger bands will play a lot of major markets on one tour and then they’ll mop-up, they’ll go where they have a large number of fans that aren’t necessarily in the bigger markets but who still really want to see them live.

You’re really popular in Canada, but it seems that in the U.S. there’s not as much of a focus on your band.

Yeah, it still feels like it’s the early growth stage here in the U.S. We have focused a lot on Canada, and being a Canadian band we have avenues to exposure in Canada in a very immediate way that are harder to come by in the U.S., especially when you don’t live there. The U.S. is a tough market to break, it’s a big market, there’s a lot of people, it’s all very spread out. The radio stations are very region specific and there’s a lot of regions. This tour is a huge step for us to really see areas that we’re not usually lucky enough to get around.

How have you found fans’ reactions to your really diverse sounds?

It’s kind of become part of our identity. I get the feeling that the fans that we have are often fans of ours because of the variety in our music. There have been some people that have said to us, “Your first album was my favorite album and I feel that you’ve kind of moved away from that sound.” But we do get a lot of fans that come up and tell us that every album has built on the one before, and has gone to a new rich place.

The Sticks seems so much darker, not just thematically in the lyrics, but also musically — it’s a heavier album as a whole. From your perspective, what caused that tonal shift?

Our taste (laughter). It’s our first real stab at a concept album. The theme was one of disenchantment with society on a large, chaotic scale. The album itself was an expression from the point of view of one who becomes miserable within that realm, and looking for freedom from that. It only makes sense that it comes from a dark place. Whereas, I think that the songs before were also dark; the lyrical content certainly was dark, and it very often didn’t juxtapose with the bright, almost happy-sounding music, which to some extent might have made it seem a little darker.

Can you talk about the band’s approach to live performances?

One thing that we try to add to our live performance is a sense of fluidity. We segue a lot from one song to the next. We like to create an element of a continued experience from the beginning of the show to the end so that the show itself has a lot of meaningful movements to it that can hopefully keep people’s attention within the music. Speaking personally, I tend to lose interest when a band plays a song for three and a half minutes and then the crowd cheers and then they talk for a little bit and then they play a song and then they stop… As a band we all feel that a show shouldn’t have too many of these stops, that peoples’ attention spans are an easy thing to break, especially on a large scale. And that includes our own. We like to play music, and. not. stop.

So no jokey banter then?

There’ll be some of that too, perhaps less so than a lot of other bands. We do try to keep it focused on the music and build a show that remains true to the entire message of the journey.