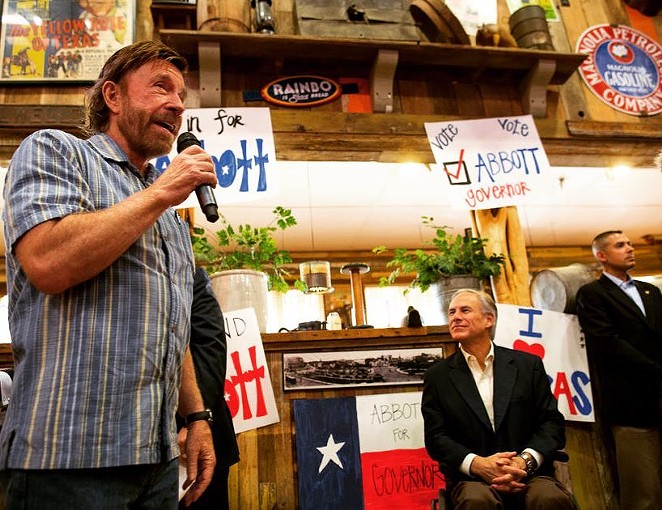 Instagram / governorabbott
From now on, Texas school children will only learn about real heroes like Chuck Norris.
We understand that in the current political environment it can be really tough to tell the difference between real news stories and satire, which is precisely why we're letting you know that this is a work of satire.

You may have heard that Gov. Greg Abbott and the Republican-controlled Texas Legislature think we should no longer dwell on our history of slavery, genocide, hangings and other things that reflect negatively on our state. The concern is that if we’re overly reliant on facts, white children will get triggered.

Still, we realize that some parents may have doubts about this exciting new learning experience. So before we get started, our state leaders ask that we dispense with some of the misconceptions about our past. Let’s start with our friends the Native Americans, shall we?

Fake historians have long argued that we stole America by slaughtering the Natives. Nothing could be further from the truth. They were “nomadic,” after all, which is just a polite word for “homeless.” By the time we arrived at Plymouth Rock, they hadn’t filed a single property deed in the entire United States. Legally, the land was up for grabs. So we took it fair and square. This provided the Natives with a valuable lesson on the dangers of procrastination.

Yes, there may have been a little slaughter. But it wasn’t our fault. While the Natives were inventing tomahawks, we were inventing guns. Had they the foresight to properly invest in R&D, it would have been a different story. But they didn’t. And that’s on them.

The same principle can be applied to “so-called slavery” – or as the state likes to call it, the “largest minority job program in American history.” As you may know, Africa is a dump. Instead of embracing capitalism, with every man for himself, its tribes freely shared their goods and services. The economy naturally suffered.

So when they heard about exciting new job opportunities, millions flocked to America. Though these were technically unpaid positions, plantation owners offered benefits packages that included free transportation, food, and housing. This was just one of the many wonderful aspects of a free market system.

Yes, conditions could be harsh. But this was necessary to instill a robust work ethic in lazy foreigners. And, yes, their employment contracts did prohibit them from leaving for a better job. But they also received a modest clothing allowance, plus real-world training in the dynamic field of agribusiness. Layoffs were unheard of. It’s fair to say slaves enjoyed more job security than any other worker in U.S. history.

All this cheap labor was a boon to the economy. Still, some objected to the idea of “owning people” — namely RINO President Abraham Lincoln, who had no respect for private property rights. He hadn’t worked hard enough to own people too. So in a jealous fit, he launched the War of Northern Aggression.

The South fought valiantly in the name of freedom. Yet they were overwhelmed by the dark forces of tyranny. The slaves were freed. Unemployment skyrocketed. That’s what happens when the socialists win.

Slavery was outlawed in 1865. Ever since, Blacks have had it just as good as Whites. There may have been a few lingering problems with massacres, lynchings, segregation, job discrimination, voter suppression, redlining, police killings, mass incarceration, inferior schools, etc, etc. Our Republican leadership has pointed out, the law has fixed everything else. These days, major corporations occasionally even hire Black guys as the head of HR.

The state hopes you’ve enjoyed this comprehensive examination of America’s racial history. If any of you white kids feel triggered, extra counselors are available to help you deal with the trauma. As for you students of color, we hope this lesson has opened your eyes to how much your parents have lied to you, and that you finally stopped whining.

Feel free to spend the rest of the hour playing on your phones. Tomorrow, we’ll begin to discuss real history, the story of how white people made this country the greatest nation the world has ever known.

A version of this story previously appeared in the Cleveland Scene, an affiliated publication. San Antonio Current Editor Sanford Nowlin also contributed to this piece.