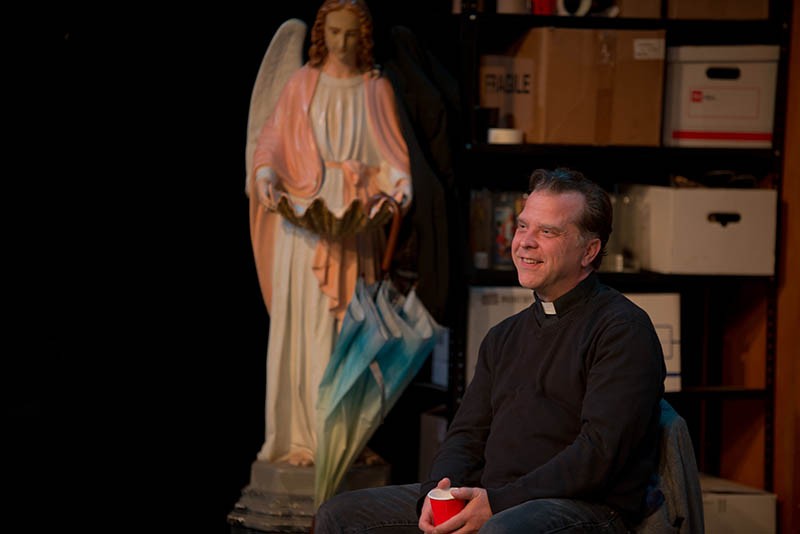 In A Moveable Feast, his memoir of Paris in the '20s, Ernest Hemingway recounts how F. Scott Fitzgerald appealed to him for advice: According to Zelda, Fitzgerald's penis is not large enough to satisfy her or any other woman. Hemingway tries to reassure him by taking him to the Louvre to compare his measurements to those of the museum's nude statues.

According to an ethnic stereotype, men of Irish descent — like Fitzgerald — tend to be poorly endowed. Whether anatomically accurate or not, a belief in "the Irish curse" can deflate a man's sexual performance and devastate his ego. In The Irish Curse, a support group gathers one rainy Wednesday evening in the basement of a Brooklyn church in order to share and assuage their anguish over anatomical insufficiency. In what is in effect "The Penis Monologues," five anxious men each tell their stories. In the intimate space of the Tobin Center's Carlos Alvarez Studio Theater, AtticRep's raucous, funny and disquieting production of Martin Casella's 2005 play situates the audience within that group, to ponder not only a peculiar physiological problem, but larger questions about the relationship between anatomy and destiny as well as sexuality and love.

AtticRep first produced The Irish Curse in May, 2011, and this revival enlists two new actors — Alejandro Cardona as Rick Baldwin, a 22-year-old Irish-American who masks his physical deficiency by stuffing a sock in his pants and affecting lechery, and Sam Mandelbaum as Kieran Riley, an actual Irish immigrant who wanders in out of the rain with a woeful tale that outdoes them all. Convening the proceedings is Father Kevin Shaunessy, played with panache by Rick Frederick (also responsible for the set design), who, last seen here as Austin in True West, continues to demonstrate remarkable versatility. Challenged to talk about himself, jolly Father Kevin, who gets flustered when the others become too bawdy or combative, reveals that he, too, has the Irish curse; it is why he became a priest. "Aren't you ever angry at God?" asks Kiernan. No one blames Saint Patrick, who chased the snakes — those phallic devils — from Ireland.

Explaining how he manages to be hyperactive sexually despite his "Irish" handicap, Stephen Fitzgerald (Tyler Keyes), a belligerent gay cop, nevertheless concedes: "Some days I'd sell my soul for seven inches." Weeping openly over the fact that his beloved wife abandoned him for a well-hung stud, Joseph Flaherty (Lawrence Coop), a genteel, middle-aged lawyer, likens his own penis to a bottle cap. He riffs wildly, and wisely, on penis envy as the source of global conflict.

The five actors in this production seem as comfortable in their roles as their characters are awkward in their bodies. The Irish Curse is a blessing in these guys.