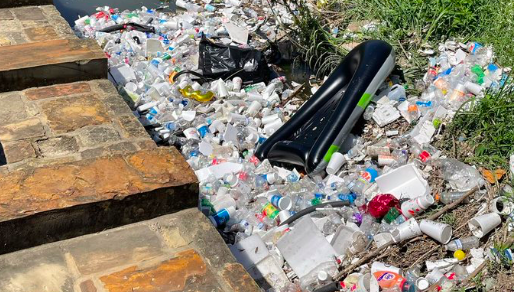 Twitter / @Ryan_Serpico
This photo shared on Twitter shows litter washed up along the banks of the San Antonio river near Confluence Park.

A photo of garbage accumulated along the banks of the San Antonio River posted to Twitter this weekend drew anger from residents saddened to see the city's namesake waterway turned into a trash dump.

"Dear San Antonio, can we not treat the river like a landfill?" Ryan Serpico, an Express-News web producer, tweeted Saturday. An accompanying photo showed discarded water bottles, polystyrene cups and fast food packages washed up along the bank.

Deepening the civic sting, he captured the image a mile south of Confluence Park, a public space near the San Antonio Missions dedicated to environmental education and watershed protection.

As of press time Monday morning, the photo had been retweeted more than 1,300 times with users admonishing local litterbugs and lamenting the lack of cleanup. At least one user pointed out that recent rainstorms probably carried trash from nearby streets and parking lots into the river.

Serpico also posted a photo of the other side of the river that appears to show it just as inundated with garbage.

The other side of the river was bad too. pic.twitter.com/aMK0k7h7hq

But there was an upside to the embarrassing snapshots.

San Antonio Parks Foundation board member and auto dealer April Ancira tweeted to ask where the litter was located. When Serpico highlighted the spot on a map, she quickly responded that "we got the ball rolling" on a cleanup.

Alright.... we got the ball rolling on a clean up now.... thanks for posting and advocating for our green and natural spaces.

"Thanks for posting and advocating for our green and natural spaces," Ancira added.