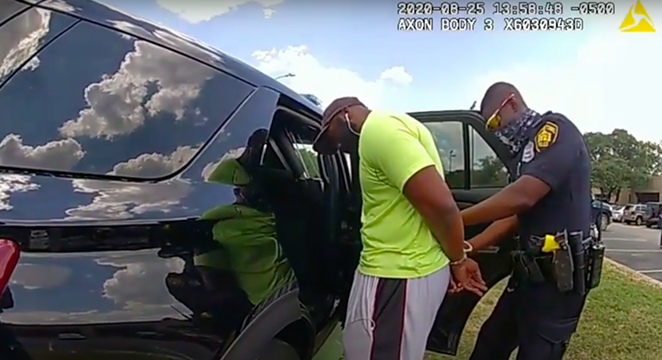 YouTube / San Antonio Police Department
Body cam footage shows officers detaining jogger Mathias Ometu in August 2020.
The Black jogger whom San Antonio police wrestled into the back of a patrol vehicle last year in a case of mistaken identity has sued the city, its police chief and the officers involved.

The lawsuit filed by Mathias Ometu, 33, accuses two San Antonio Police Department officers who participated in the arrest of "excessive use of force, unlawful arrest, malicious prosecution, defamation and violent physical assault" in the August 2020 arrest. It also accuses Police Chief William McManus and the City of San Antonio of failing to oversee and adequately train police officers.

The suit was filed in late August in Bexar County District Court but first reported on Tuesday night by the Express-News. The petition asks for compensatory and punitive damages but doesn't specify a dollar figure.

In a recently filed response, the city said it shouldn't be held liable, maintaining that Ometu broke the law by struggling with officers. The filing also maintains that the city provides adequate training to its police force, as required under the Texas Commission on Law Enforcement.

Ometu was arrested after police incorrectly identified him the suspect in a domestic assault in the Northwest San Antonio neighborhood where he was out for a run. After he declined to give his name — something he's legally able to do under Texas law — officers forced him into the back of their SUV.

Body-cam footage of the arrest catapulted it into the headlines amid the national reckoning on police force and racial justice brought on by the Black Lives Matter movement. Officials including Mayor Ron Nirenberg demanded an accounting for the incident.