Rittenhouse was acquitted of homicide after fatally shooting two people during a Black Lives Matter protest in 2020. 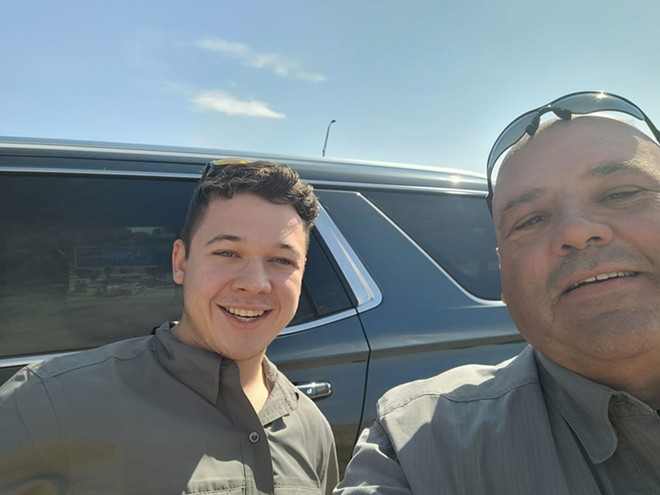 Facebook / Thrall Police Department
This online photo garnered angry comments and reactions on the Thrall police department's Facebook page.
The police department of a small town east of Austin is catching online criticism after sharing a photo of one of its officers posing with Kyle Rittenhouse on Facebook.

The Thrall police department posted the selfie of an unnamed officer and Rittenhouse on Thursday, as first reported by the Express-News. "Make those stops, you never know who you might meet," the caption said. "Today it was Kyle Rittenhouse, welcome to Texas"

Rittenhouse, who recently announced plans to relocate to the Lone Star State, became a celebrity in far-right and white supremacist circles after fatally shooting two people and wounding a third during a 2020 Black Lives Matter protest in Wisconsin. He was later acquitted of homicide charges.


The Thrall PD's post garnered 8,000 reactions and more than 1,000 comments, many blasting the department's decision to glorify the 19-year-old shooter.

"Sick you are making him out as a hero," Facebook user Jennifer Irene commented. "Shame on your officer and this department."

Another comment said that the appearance of the officer with Rittenhouse made sense because "both can kill people without repercussions."

Hours after the Thrall PD's initial post, the department added a lengthy paragraph defending the photo.

"I must have missed something, I believe that young man was arrested, charged, indicted, and then found not guilty by a jury of his peers," the edited post read. "Is this not how our country works anymore? The hate in these comments is terrible, if you have information that is contrary to that I would honestly love to hear it."

Earlier this year, Rittenhouse announced during a radio appearance that he would be attending Texas A&M University in the fall. He later walked back his claim after university officials denied that he was registered to take classes at A&M.

It's unclear how the officer and Rittenhouse met.