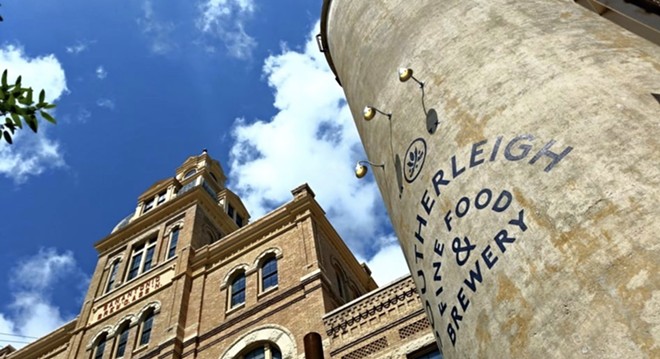 Instagram / southerleigh_fine_food
Southerleigh at Pearl has reopened with a revamped menu.
When brewery and restaurant Southerleigh revealed plans in August to close for infrastructural upgrades and to execute a revamp its menu, some folks got the wrong idea.

"It was kind of a nightmare, actually, because people would stop us on the street and ask what we were going to do to the place. They wanted to know what it was going to look like when we were done," Southerleigh Hospitality Group co-founder Jerome Serot said Friday at a private tasting showing off the eatery‘s new menus.

According to Serot, the updates to the 128-year-old building inside the Pearl complex were necessary to ensure its integrity. Visitors may notice new treatments to the restaurant's floors and windows, along with refreshed upholstery, but that's largely where the changes to the dining room end.

Nina Rangel
Southerleigh's new beet salad features whipped goat cheese, along with bacon and thyme-infused oats.
"No one wants to hear that the pipes needed to be replaced," Serot added. "That's not sexy."

Returning customers will notice big changes with the menu, however.

As such, gone from the lunch offerings are the eatery's signature snapper throats. Those who pine for the crispy fried fish collars can still get them at dinner, but more on that later.

Nina Rangel
Southerleigh's new dinner offerings include pork schnitzel (left) and fried chicken.
In comparison to the starkness of lunch offerings, the dinner menu is now larger and more diverse, featuring flavors such as curry-dusted calamari and chili-dressed cucumber and chayote squash salad. There's also an appetizer of duck and shiitake lumpia with an accompanying red pepper aioli and a jelly of SA's most-used herb, cilantro, which manages to be equally sweet and savory.

"That's just one of those things we can't get away from," Balfour said at the tasting. "We decided to remove the dish from the lunch menu because we would sell out before dinner service started, so we know it works ... we're just changing when it's available."