By Sound and Fury 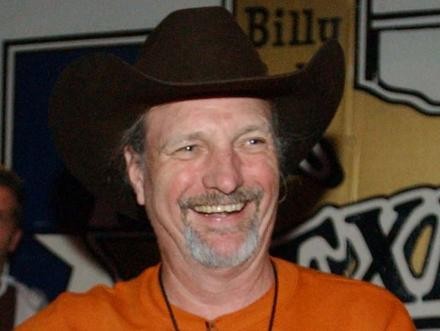 Dan "Bee" Spears (1949-2011) (photo by Master Sgt. Lee Roberts, USAF) San Antonio-born Dan "Bee" Spears (Dan Edward Spears), who joined Willie Nelson's band as a bassist when he was 19, died in Nashville yesterday. Austin's KXAN reported that "he stepped out of his motor home late Thursday evening when, according to his friend, Dee Pearce, he slipped and fell. Spears was found dead, succumbing to exposure." Temperatures on that night had dropped to 25 degrees. “We are deeply saddened by the death of Family member Dan 'Bee' Spears, long time friend and bassist for Willie Nelson and Family," said Nelson in a statement on his website. "We are still in shock and gathering details as the day continues.” He joined Nelson's band in 1968 and recorded many classics with him, including Red Headed Stranger, Stardust and Always on My Mind. He also recorded with Waylon Jennings, Jerry Jeff Walker, Guy Clark, and the supergroup Highwayman (Nelson, Jennnings, Johnny Cash, and Kris Kristofferson), and acted alongside Nelson in the movies Honeysuckle Rose (1980), Songwriter (1984), and Red Headed Stranger (1986), as well as the Monk TV series in 2002. "He was a fantastic player, and a great person," Augie Meyers (Sir Douglas Quintet, Texas Tornados), a childhood friend of Spears, told the Current on Friday. "He was like me: he'd like to sit and tell jokes. One day in the '60s, in England, I was with Dough [Sahm], and Willie [Nelson] and Bee were there. We'd laugh for three or four nights straight. I found out [about his passing] this morning, and I can't believe it." Funeral arrangements are pending.