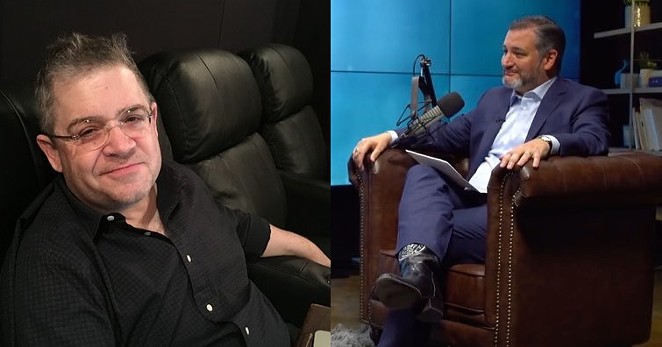 Armchair insurrectionist and full-time Internet troll Sen. Ted Cruz, R-Texas, sure does like picking online fights with celebrities. Even though they seldom go well for him.

In the latest of Teddy Boy's online misadventures, he took a virtual beating about his mulleted head and neck from comedian Patton Oswalt after taking a swipe at the standup for cancelling shows at two venues that don't require audience members to be vaccinated.

"Both of his fans were disappointed," Cruz tweeted Thursday, sharing an article on the cancelations.

In case you missed it, Cruz — who's been vaccinated — has a new schtick where he rails against masks and injections because they're tools of the big, bad nanny state or some shit.

Both of his fans were disappointed. https://t.co/2JdepUcLjh

While Cruz fancies himself a skilled debater with a blistering wit, let's just most of the blistering came from Oswalt, who gave bad little Teddy Boy the spanking he deserved.

Oswalt began his salvo of responses with a sigh, first laying into Cruz for heading out on a tropical getaway while his constituents froze to death during Winter Storm Uri.

Not as disappointed as Texas was when you cut your Cancun vacation short and came home. https://t.co/kY3nXZuQSB

Oswalt then stacked up four more incendiary putdowns before signing off.

Ted, you Tweeted this at 1am. Put the phone down and return to liquid form for a few hours

Well, that was fun. As always Ted, you’re a friendless, cowardly embarrassment and your beard looks stupid.

Adding insult to injury, someone who wasn't Oswalt shared screen captures of both Cruz's and Oswalt's Twitter accounts to demonstrate that the standup does, in fact, have more than two fans. Turns out Oswalt has 200,000 more Twitter followers than Cruz.

"Womp, womp," Twitter user Josh Marshall added after the share — a sound that could well be tacked onto the end of most of Cruz's attempts to use his rapier wit on entertainment-industry libs.