Cannabis advocates are pushing the Department of Public Safety to streamline rules for the state's so-called Compassionate Use Program. 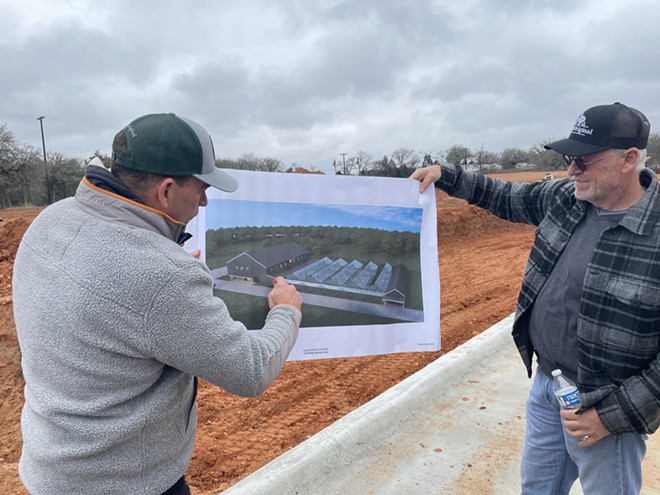 Cannabis advocates were encouraged last month when the speaker of the GOP-controlled Texas House expressed support for lowering penalties for marijuana possession.

During an appearance at the Texas Tribune Festival, House Speaker Dade Phelan, a Republican, said he was comfortable with revised weed penalties being part of a larger debate over criminal justice reforms during the next session, which starts in January.

Phelan's statement comes after Texas' medical marijuana industry won a victory during the 2021 legislative session that allowed it to broaden the number of people it serves, including all cancer patients.

Advocates are now pushing the Department of Public Safety to streamline rules for the state's so-called Compassionate Use Program. The industry also is expected to ask lawmakers during the upcoming session to further expand the scope of the program to include those suffering from chronic pain.

We caught up with Morris Denton, CEO of Texas Original Compassionate Cultivation, one of just three medical cannabis suppliers approved under the state program, to see what the prognosis is for expansion of medical cannabis during the next session.

This interview has been edited for length and clarity.

From an industry perspective, it must be encouraging to hear House Speaker Dade Phelan talk about the need for reform. However, fellow Republican Lt. Gov. Dan Patrick has been a longtime roadblock in the Texas Senate. Is there any reason to be optimistic that Patrick has changed his mind on cannabis?

Well, I think there's a lot of things that are happening on this issue all around him and all around the state of Texas from a political perspective. And what is really happening is that there's a tremendous ongoing groundswell of support within the Republican Party for advancing safe and legal access to medical cannabis. The Republican Party in the state of Texas, by a wide margin, supports legalizing medical cannabis. And when you start to see the kinds of numbers that support it, eventually legislators either get caught up to that and embrace the changing reality or over perhaps a longer period of time, you'll get a new set of faces in the capitol.

The polls have shown strong support, even among Republicans.

Widespread. It's very widespread support. And that combined with just the ongoing amount of consistent feedback from the people of the state of Texas that are participating in the program and how medical cannabis has changed their lives. It's a very compelling story. And when you have the kind of widespread political support within your own party on an issue that has tremendous credibility and efficacy in its impact as medicine, it's a win-win-win. You're not going to go wrong by saying, "Hey, we're going to get on board and we're going to support this. ... We want to create the right kind of regulatory framework and environment that allows for businesses to be successful and not to have the type of challenges that we see popping up in other states that went too fast." That's a regulatory issue, that's not a policy issue. So, I'm optimistic ... that we will get continued improvement in the program. I think there's tremendous support for it. I think all the Democrats are there, and I think the vast majority of Republicans are there. And I do think that the lieutenant governor will do what's in the best interest of his constituents in the state of Texas, which means he'll get behind expanding and improving the Compassionate Use Program in the 2023 session.

What's on your wish list? What changes that could be realistically passed could improve the Compassionate Use Program?

So, there are a number of rule changes that need to be made just to improve the overall functionality of the program, none of which take statutory changes. And, so, we're working with the [Department of Public Safety] on some of those proposed rule changes.

What's the biggest one that you're talking with DPS about? I know one sticking point is not being able to store product overnight at the dispensaries you operate outside of your corporate headquarters.

Absolutely. That's one of the top items from a rule perspective: having the ability to store inventory throughout the state of Texas — where it makes sense for us to store inventory as a business in order to get closer to our patients. Patient accessibility is a real issue that's been limiting growth of the patient numbers in the state of Texas. And it's not because there aren't enough licensed dispensaries to take care of the people, it's because we're prohibited from storing inventory close to where our patients live.

And, so, it becomes a massive business challenge and logistical challenge when we're being told, "Hey look, you have to ensure reasonable statewide access." Which means that if there's a patient in El Paso or in Amarillo, you've got to figure out a way to get them to medicine. "But we're not going to make it easy for you, because we're not going to allow you to store inventory anywhere except for the one location that you have wherever you are." For us that's in Austin. I mean look, I expect that will be one of the big things that will change.

What about changes that you're looking for from the Texas Legislature?

But from a statutory perspective ... there's really just two big changes we'd like to see this session. One is that chronic pain should be added as a qualifying condition. ... What's fascinating is that of all the indications, all the conditions, chronic pain is the one that has the most science and data that supports the efficacy of medical cannabis. And yet it's the one condition that a lot of legislators view with suspicion because they think that it's just a beard for someone wanting to get high.

So, we want to see chronic pain added. With the opioid epidemic that continues to just rage, with the fentanyl issue, with all the drugs coming across the border, with the addiction rates continuing to spike, with the number of overdose deaths in Texas continuing to climb, there's got to be an alternative for doctors to be able to start their patients out on something that's not, No. 1, so addictive. And, No. 2, so easy to abuse that it results in overdoses. And that's cannabis. And again, the polling on that spikes very strong, especially if you characterize it as an alternative to opioids.

And then the other thing we want to see happen is we want to see the THC cap removed. Right now, we're not allowed to produce a product that has more than 1% by weight. And it's a misunderstood, extraordinarily ineffective rule that I think was put in place because the legislators didn't want people to be consuming high amounts of THC. Well, they thought that by adding the 1%-by-weight rule, that they would put a restriction on how much a person could take. That's not the case. It hasn't impacted a doctor in terms of how many milligrams of THC they want their patients to take for their given condition. It just has a negative impact on the patient, because they have to consume so much other stuff to get to the prescribed dose by their doctor.

From a patient perspective, it also seems like it's going to increase the expense, right? Because if you need a certain dosage, you just have to take more of the individual gummies or whatever.

Correct. The analogy that we use ... is that if Advil had the same 1%-by-weight limit on ibuprofen in their tablets, in order for you to get to the target dose that is contained in two tablets of Advil at 1%, you would have to take 40 tablets. And, so, it just creates this ... unhealthy, unnecessary rule that really doesn't do anything except for create problems for patients, both from a consumption perspective and then also an expense perspective. All these changes that we're talking about making are all rooted in improving the experience for the patient.