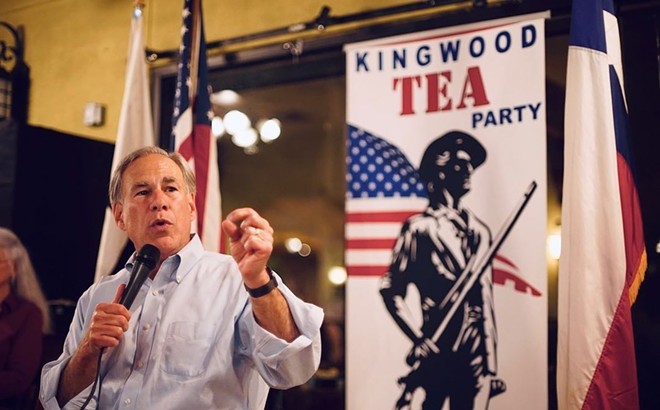 Instagram / governorabbott
Gov. Greg Abbott speaks at a Kingwood Tea Party event. Apparently, the "tea" in that name has nothing to do with the kind you smoke.
Don't hold your breath for Gov. Greg Abbott to sign legislation legalizing recreational cannabis in Texas.

The two-term Republican told the Dallas Morning News on Tuesday that, despite recent polls showing that the majority of Texans support legalization, he believes it should remain illegal for recreational purposes.

In comments during a North Texas business roundtable, Abbott told the paper his view is unchanged from prior statements in which he said pot possession should be dropped to a Class C misdemeanor but still remain on the books as a crime.

“We don’t need to be stockpiling in our jails and prisons will people who are arrested for minor possession allegations,” Abbott said.

In contrast, the governor's Democratic rival in the November election, Beto O'Rourke supports the full legalization of cannabis in the state. Currently, legal weed in the Lone Star State is only available through a restrictive medical cannabis program that limits its potency and what maladies it can be prescribed for.

A new Dallas Morning News-University of Tyler poll shows Abbott ahead of O'Rourke by seven points in the gubernatorial race. But that same poll suggests Texans' views on weed align more closely with O'Rourke's — 60% of respondents support legalizing pot for recreational use, while 83% want it legal for medical use.

Abbott's continued opposition also appears to fly in the face of a national trend. Recreational marijuana is now legal in 18 states, including neighboring New Mexico, while Texas' other surrounding states — Oklahoma, Louisiana and Arkansas — have approved robust medical cannabis programs.