Advocates are hoping the Texas Legislature increases the potency cap for medical pot and make it available to people suffering from chronic pain.

Even though the Texas Legislature created the state's medical marijuana policy, the Compassionate Use Program (CUP), nearly eight years ago, it remains one of the most restrictive in the United States.

State lawmakers have several times broadened the number of conditions for which medical cannabis could be prescribed — PTSD and all forms of cancer were added in 2021. But, even so, just over 43,000 patients were enrolled in the program as of December, according to data from the Department of Public Safety.

And experts believe the number of people actually accessing cannabis under CUP is considerably smaller. The law's limit on the amount of THC allowable in cannabis products is a turnoff to many who qualify, and it remains closed to people who suffer from chronic pain, a condition recognized by other states' medical pot rules.

"We need a comparable program to what other states have adopted," said Jax James, executive director for Texas NORML, which advocates for marijuana reforms. "If our state is going to continue moving ahead with baby steps, we're going to continue holding back patient access."

At present, 37 states and the District of Columbia have laws permitting medical use of marijuana, according to the National Conference of State Legislatures. That includes the four that border Texas — all of which have adopted far more robust plans.

With Texas' new legislative session underway, lawmakers face increasing pressure from voters, medical professionals and the state's burgeoning cannabis industry to catch up. Advocates also argue that the time is right for lawmakers to decriminalize cannabis in the state or at least scale back its comparably harsh penalties for possession.

The question is whether the Republican-controlled Lege is willing to put politics aside and enact reforms, advocate argue. If they don't, Texans will continue to turn to illegal sources for cannabis and stymie the growth of a homegrown cannabis industry, which is still in its infancy.

"We're looking for safe and legal access inside the state of Texas," said Lisa Sewell, director of operations for Texans for Responsible Marijuana Policy, a coalition working to reform the state's pot laws. "We're not looking for the black market."

In New Mexico, which legalized marijuana for both medical and recreational purposes, dispensaries posted more than $40 million in total cannabis sales in December, according to that state's Cannabis Control Division. To Sewell's point, some of the highest sales numbers were reported by dispensaries directly across the Texas border.

Sewell, James and others argue that expanding Texas' CUP to include people with chronic pain is key to driving enrollment — and it's a change that could have enough support to win approval this legislative session.

During past sessions, Republican legislators viewed chronic pain with suspicion, calling it a beard for people looking for a legal way to get high. However, experts say it's one of the conditions with the most scientific data to support the efficacy of its treatment with medical cannabis.

What's more, the growing toll of the opioid crisis makes it easier for proponents to make a case that Texans should have access to low-risk forms of pain relief, Morris Denton, CEO of Texas Original Compassionate Cultivation, one of Texas' three approved medical marijuana suppliers told the Current late last year.

"With the opioid epidemic that continues to just rage, with the fentanyl issue, with all the drugs coming across the border, with the addiction rates continuing to spike, with the number of overdose deaths in Texas continuing to climb, there's got to be an alternative for doctors to be able to start their patients out on something that's not, No. 1, so addictive. And, No. 2, so easy to abuse that it results in overdoses," Denton said. "And that's cannabis. And again, the polling on that spikes very strong, especially if you characterize it as an alternative to opioids."

Reform proponents said they're also cautiously optimistic they can gain lawmakers' support to raise the level of THC allowed in products sold under CUP. Under current rules that is set at 1% by weight, meaning 99% of any gummy or capsule must be filler.

Other states have an upper limit of 5% or impose no cap at all.

To spend less to get the potency they need, some patients resort to buying from street dealers, according to cannabis advocates.

As of press time, Texas lawmakers have filed a raft of bills proposing reforms to CUP or the state's marijuana possession laws, many coming in before the start of the session.

The broadest of those, which would legalize weed for personal use or give doctors the ultimate authority about who should qualify for medical marijuana prescriptions, are likely dead in the water given Republicans' stranglehold over the legislative process.

Even so, some advocates are cautiously hopeful that this may be the session where Texas finally rolls back its harsh possession penalties or enacts a cite-and-release approach in which people caught with small amounts are ticketed rather than arrested.

"We need a serious discussion of decriminalization in Texas, where there are so many disproportionate arrests," NORML's James said.

Analyses of arrest data show that Black people are arrested for violating pot possession laws at higher rates than whites even though both groups consume cannabis at roughly the same rate.

Adding to the pressure for lawmakers are ballot initiatives recently passed in roughly a half-dozen Texas municipalities calling for decriminalization.

Last May, 85% of Austin voters approved a ballot measure halting low-level cannabis arrests and banning police from using no-knock warrants. Activists in San Antonio appear to have collected enough petition signatures to place a similar proposal on this May's ballot in San Antonio.

Conservative lawmakers in the Texas Legislature are pushing back with bills that bar district attorneys from selectively enforcing state laws such as those governing pot possession. However, it's unclear how much traction those will gain.

Overall, reform advocates said the current climate is ripe for a robust debate on the state's possession laws.

"I definitely feel more hopeful on the medical side, but I think we have a chance this time around to push decriminalization to the fore," James said. "I think we can get something done."

Support from the "Big Three" Republicans who will help decide the fate of reform is still open to question. But advocates said they're heartened that both Gov. Greg Abbott and House Speaker Dade Phelan have publicly stated their support for discussing lower penalties for pot possession.

Lt. Gov. Dan Patrick, who controls the fate of legislation in the Texas Senate, has been a harder read, and he's shot down reform efforts in the past.

Still, advocates said recent polls show that Texans of both political parties widely support both medical marijuana and decriminalization. Lawmakers are well aware of the numbers, they add. Even Patrick.

In a University of Texas/Texas Politics Project Poll from December, only 17% of Texas voters said they want a complete state prohibition of cannabis use.

Beyond that, 72% of respondents said they support reducing the punishment for possession of small amounts of marijuana to a citation and a fine. Among Republicans, 63% favored reducing pot penalties, while 84% of Democrats and 66% of independents supported the idea.

Of course, Texas Republicans have shown a willingness to ignore public opinion on matters such as abortion, but political observers say they continue to do so at their own risk. Digging in to appease the party base may have short-term benefits — it also has longer-term repercussions.

"The Republican Party in the state of Texas, by a wide margin, supports legalizing medical cannabis," Texas Original CEO Denton told the Current late last year. "And when you start to see the kinds of numbers that support it, eventually legislators either get caught up to that and embrace the changing reality or over perhaps a longer period of time, you'll get a new set of faces in the capitol." 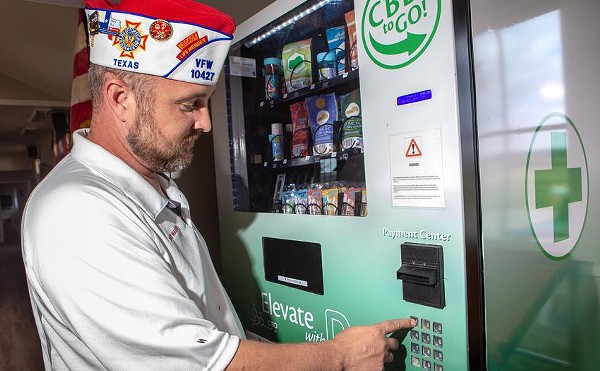