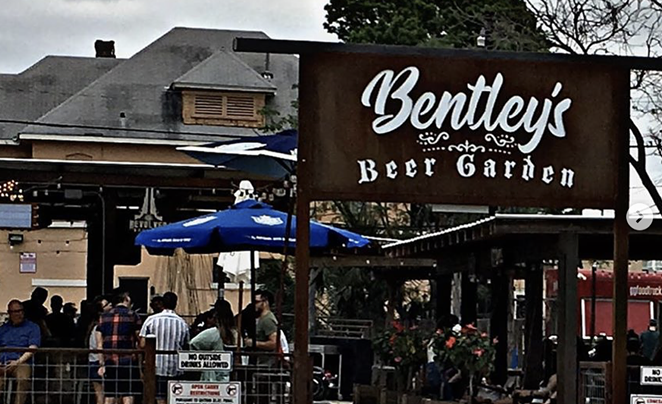 After an activist accused San Antonio nightspot Bentley's Beer Garden of calling out Black customers with its dress code, the downtown bar is clapping back, insisting its rules are “not racist by any stretch of the imagination,” the Express-News reports.

In a Jan. 13 tweet, 23-year-old activist Kimiya Factory shared a photo of a sign outside of Bentley's Beer Garden which read, "No saggin [sic] of pants or shorts. No durags or wave caps allowed.”

“Looking for a Racist Bar to attend in San Antonio?” Factory’s tweeted. “Bentleys Beer Garden got it covered ... It’s the anti-blackness for me.”

Looking for a Racist Bar to attend in San Antonio ? Bentleys Beer Garden got it covered 👍🏾👍🏾👍🏾

Discriminating against Black Hair Products/styles. It’s the anti-blackness for me. #Texas101 pic.twitter.com/L0Q23CIm7t

Factory is executive director of the San Antonio organization Black Freedom Factory, which works to cultivate racial equity in the city. She told the Express-News she shared the image of the dress code because she believes it targets specific dress styles typically associated with Black culture.

Durags and wave caps are scarves tied around the head primarily to protect Black hairstyles. Some people also wear them for reasons of personal identity.

“Bars are places that people should be able to go to enjoy themselves and unwind,” Factory told the daily. “This kind of sign further marginalizes its patrons that enter that bar and are seeking a safe experience from racism.”

E.J. Rodriguez, a manager at Bentley’s, told the daily the rules are not intended to target Black customers.

“We’re not racist by any stretch of the imagination, we just don’t want that at our bars,” he said, adding that he wears wave caps and durags at night.

“They’re not made to come out to the club or to wear in public,” he said.

However, Factory told the Express-News the code specifically targets items worn by Black people during their everyday lives, meaning it's "clearly discriminatory in its nature.”

“Although pant sagging isn’t exclusive to the Black community, it’s still associated with these negative and harmful archetypes that Black folk are forced to identify with,” she said.

Bentley's Rodriguez told the paper his establishment won't take down the sign. The bar’s primary clientele consists of Hispanic, Black and white people, and that the sign has deterred patrons from showing up wearing the prohibited clothing, he said.

“They don’t come into our bar because it’s just unacceptable in society today. Period,” he added.