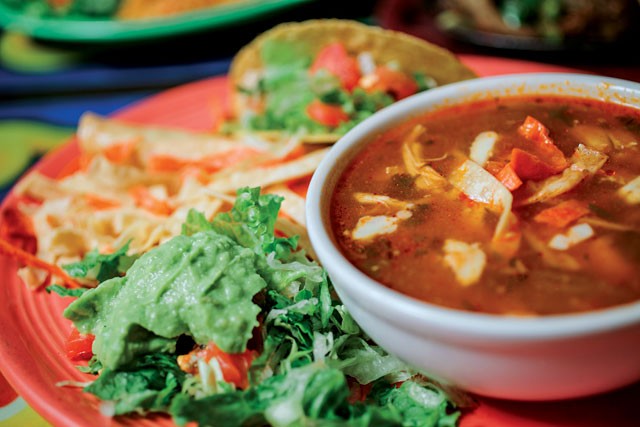 Is two of anything enough to signal a trend? If so, then the taco is ready for a run — at least in the book world. The last few months have seen the appearance of Taco USA: How Mexican Food Conquered America by Gustavo Arellano of "Ask a Mexican" fame (in equal measure, appealingly impassioned and annoyingly Cal-centric) and Midwestern professor Jeffrey Pilcher's Planet Taco: A Global History of Mexican Food (what it might lack in passion, it more than makes up for in scholarship).

We might stage a mano a mano between the two tacoistas in the future, but today let's explore Pilcher's assertion that the "Mexican" food that has spread around the world — indeed, as far as Stockholm, Sweden, and Tashkent, Uzbekistan — is not really Mexican at all (what that is remains a separate question) but rather a sketchy version of Tex-Mex — OK, with a little Cal-Mex thrown in. Pilcher has eaten in many of these Faux-Mex restaurants, and his arguments are convincing. Accordingly, I have a suggestion for the perfect mother of all global Mexican restaurants: Nicha's Comida Mexicana right here in San Antonio. It hits all the buttons.

Let's first press décor. The mural in the main dining room avoids the images of the sombrero-wearing Mexicans that, due to "cultural insensitivity," were sanitized out of the restored Mission Drive-In marquee across Roosevelt, but it is otherwise the very essence of romanticized New Spain set against a backdrop of missions and River Walk scenes, complete with troubadours and palomas in flight. Perfect for global consumption.

Then there's the menu: an almost comically classic example of un-ironic Spanglish with lines such as "served all día", "especiales of the casa", and "American comida" — again, perfect for export. But what would be harder to emulate abroad is the infectiously warm feel of the place, mural and menu included. The servers are genuinely attentive, the chatter of contented patrons is equally welcoming, and the food is worthy of emulation, no matter how confusing or misleading its pedigree might be.

From the served-all-día Tradicional Breakfast menu, I picked a habitual favorite: huevos a la Mexicana. As a chile junkie I might have tolerated more kick, but the scrambled eggs weren't dry, the refrieds had good, lardy flavor, and the corn tortillas, substituted for the normal flour variety, were tender and fragrant. The non-greasy papas needed a little salt, but they, too, were classic of type.

I'm not going to suggest that Nicha's menudo has been sanitized for popular consumption, but know that squeamish sorts shouldn't find it the least bit scary. This classic norteño soup, traditionally based on honeycomb tripe, calf's foot, and hominy, comes across as being almost delicate — until you add in onion and a spoonful or more of chopped jalapeño. I've never been a huge fan and don't pretend to know how the mas o menos pure dish would play in Prague, but this gabacho was pretty happy.

In Taco USA, Arellano describes one burrito as being "beyond cosmic," and says that the flour tortilla-wrapped bomb "wasn't historically widespread in Mexico," adding credence to the notion of, in this case, Cal-Mex cuisine as the source of its spread within this country and around the world. The burrito cannot be claimed by Texas, a factoid that may be cheered by many. Nevertheless, Nicha's claims that its Texas Fried burrito (chimichanga elsewhere) is an "original since 1977," and it is the bomb of all bombs.

But again I have to say that despite its muy large size, there's an element of near-finesse. Yes, the package must be at least nine inches long and about six in circumference, but the flour wrapper has been very discretely fried, the chili con carne topping is pure and unembarrassed by gravy, and the filling, though heavy with bean, cheese and a choice of meats, is really pretty tasty — not I term I often use. Yes, my al carbon carne was a touch overcooked, but the flavor was just fine.