A Local's Guide to Tackling a Whole Pig 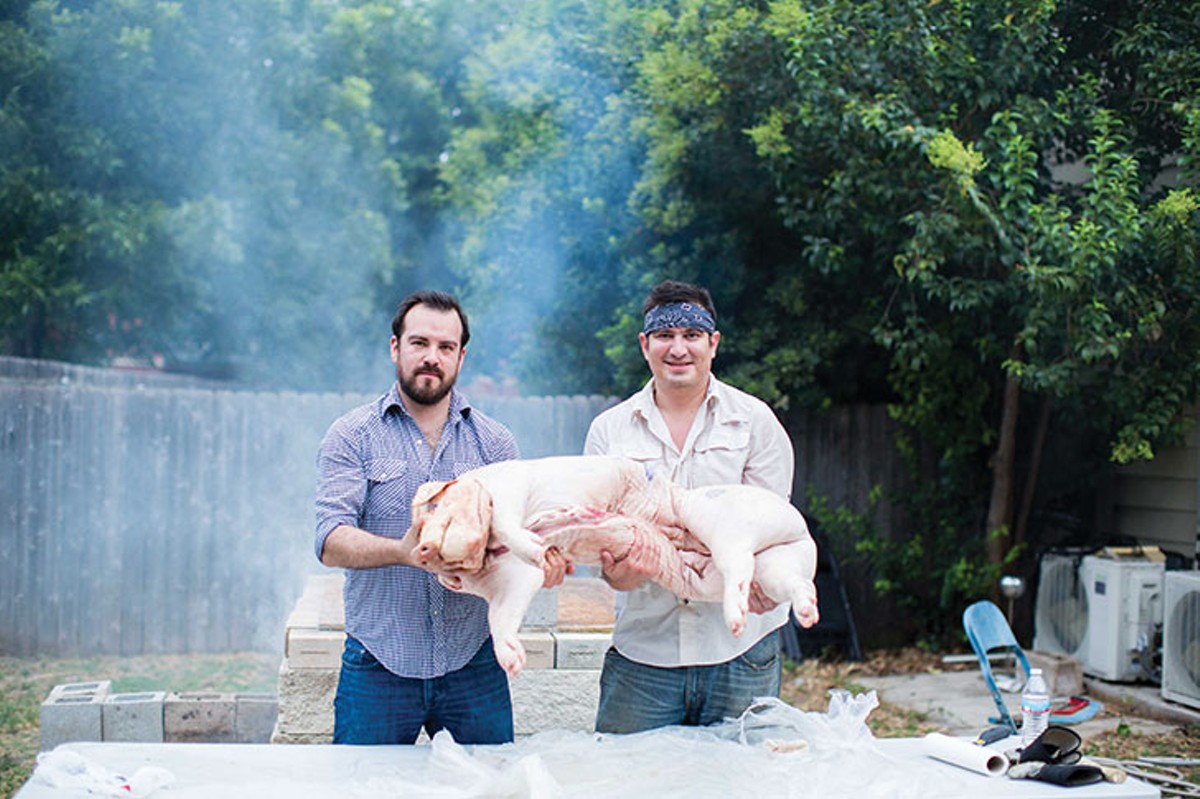 The oohs, the ahhs. The looks of wonder and hunger from most and inevitably disgust from some. The smartphone-wielding crowd — and there's always a crowd — happily snapping photos and videos of the reveal, the exact moment when a whole pig that's been slowly roasting for hours on end finally makes its debut.

Pig roasts, luaus, lechons ... whatever the cooking method, parties across San Antonio now center around said glistening hogs. Whether they're laid-back shindigs at Rumble where chef Pieter Sypesteyn toiled over a pig for several hours, or tiki soirees for the San Antonio Public Library Foundation catered by chef Luis Colon of Folc where he unveiled a crisp hog with immaculately broiled skin, hungry hordes congregate around these primal beasts.

It was only a matter of time, then, before enterprising food lovers decided to try their hands at roasting a whole pig.

This July, Aldo Mancilla, fired up his third pig in just under a year. Aptly named Jon Hamm, the hog went into a cinderblock fire pit designed by Mancilla. We documented the process and Mancilla shared his journey from smoking a few briskets overnight to delivering a perfectly roasted pig for a party of 100 guests.

Mancilla, a trained architect with a forte in construction management, first accepted the challenge of cooking an entire pig as a birthday party request from his friend, Rene Lemos, last July.

"I said let me figure out what we need, I can make it happen," Mancilla says.

Over the course of two weeks he turned to Munchies, Vice and YouTube for tips on how to approach the roast when he stumbled on a cooking method that seemed most practical for him: a cinderblock pit, often dubbed a Cajun microwave. Because of his access to spare materials, Mancilla was able to build his first oven using blocks, rebar and plywood for a total of $20 odd dollars.

"If you have a plan and know how to work tools semi-well, it's not hard at all," he says almost flippantly.

There's no mortar involved with construction — literally anyone able to stack blocks on a level surface can do this. 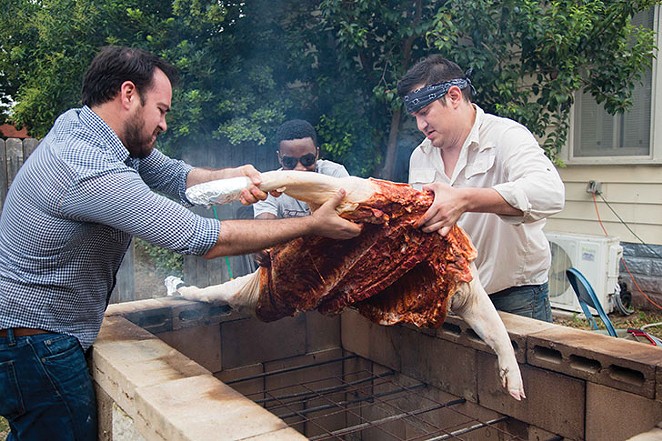 When it comes to sourcing a pig, Mancilla and co. went the Mexican route.

"We went to La Michoacana," he laughs. Now on his third roast, the butchers at the Crossroads location of the Mexican grocer are familiar with the order.

The 110-pound pig is picked up the night before and carried away in a large cooler. The head, all 8 pounds of it, isn't attached to the body so Jon Hamm can easily fit inside the container that's outfitted with plenty of ice.

At around 5 a.m., Mancilla makes both a rub and the brine (a combination of Valencia oranges, garlic, and chipotle in adobo sauce for some South Texas flair) he'll inject into the pig's larger muscles. Once it's been butterflied using a hatchet and a hammer to allow for even cooking, the pig is injected with the brine using an injector, the rind is rubbed down and massaged with copious amounts of salt that will help seal in moisture while making for extremely crunchy skin. At 7:45 a.m. Jon Hamm is ready for the heat.

The oven's temperature is kept at a relatively low 225, using oakwood ­­­— pecan or mesquite would flavor the meat too harshly over the long cook-time — briquettes that are fired up using a small inexpensive fire pit from Home Depot. 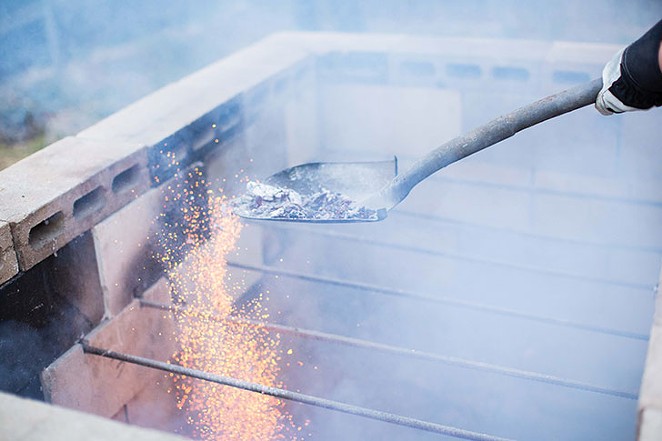 Throughout the 9-hour cooking process, Mancilla checks on the roast and refuels the coals at hourly intervals until the shoulder meat reads 175-180 and the hams come in at 185-190 degrees.

"You're only as good as the people helping you," Mancilla says. "You can do it yourself but you'd be shooting yourself in the foot." 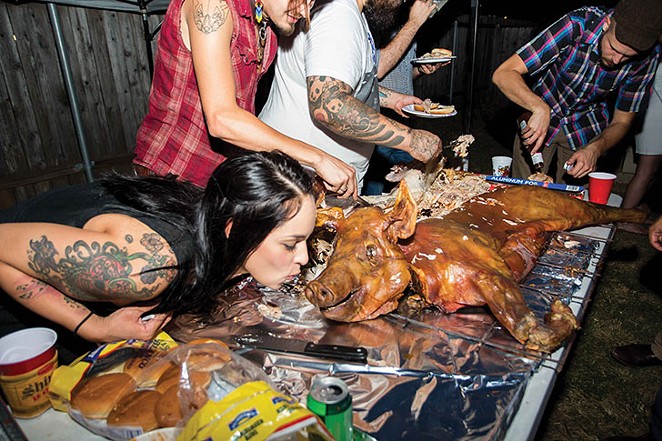 "If you can't handle the sight, you don't really know where your food comes from."

When the party starts after a 12-hour day, Mancilla and co. let their guest enjoy picking apart Jon Hamm while listening to local musicians — VANDALS, Lonely Horse, Chris Conde, among others — and watching fire dancers entertain the crowd. Clean up would have to wait until the next day.

Tips on Roasting a Pig at Home 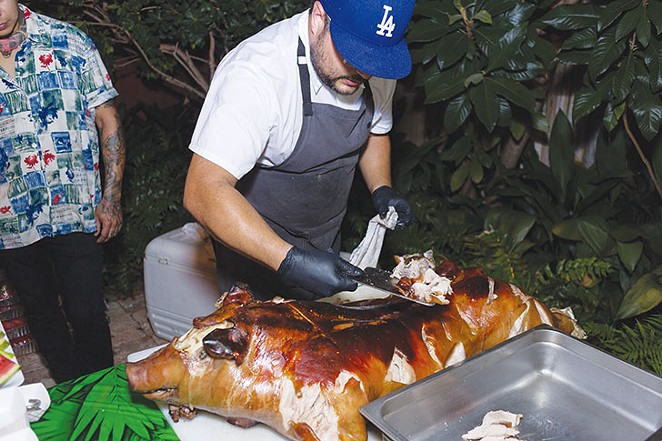 Rub it down: Always consider the crowd and hunger level. Marinating is crucial. I do a mojo rub as opposed to a brine (blended cilantro, green onion, garlic, vinegar, oil, salt). Salt is your friend. If you think it’s too much salt, add more. There’s more meat than you can imagine. Score the animal. I add salt in the scores plus I stuff garlic cloves in each crevice. The garlic roasts in there and it flavors the meat around it.

Cooking a pig: Caja China is the way to go.... Super efficient, set it and forget it almost. Set it belly up first so the bones heat up and help with the cooking. Then flip that bad boy over 3 hours in to crisp up the skin. The broiling action with that direct heat creates that glass like crackling on the back of the animal.

Choosing a pig: I always advise to go local — support the farmers in your area. These are the go-to guys for buying a whole hog because the smaller farms raise heritage breed pigs known for their fat, as opposed to a more economic hog that has been raised for its meat. Fat is flavor!

Brining a pig: The great thing about roasted pigs is that they transcend all cultures — Asian, European, Hawaiian, Southern, you name it. Regardless of how you are going to flavor it, you always need to brine the pig first. Grab a large ice chest big enough to hold the pig and make a water/salt solution, I like to add some sugar as well. Depending on the size of the pig, let it soak for a minimum of 24 hours, and up to two days. Brining helps pull out the moisture, giving you that great crackily skin. Cooking a pig: Slow and low!

Rub-a-dub-dub: I usually use a dry rub with brown sugar and salt equal parts. Then add any other spices depending on the cuisine you are trying to cook with the pig. I like to rub it for at least a day or two.

Choosing the wood: When it comes to wood it’s either pecan or oak wood. The other important thing is to not get the fire too hot or else it will burn the skin before the pig is finished cooking.