Fascinating Facts & Folklore: From Healing Waters to Eerie Entities, the Alamo City Has an Eclectic Past 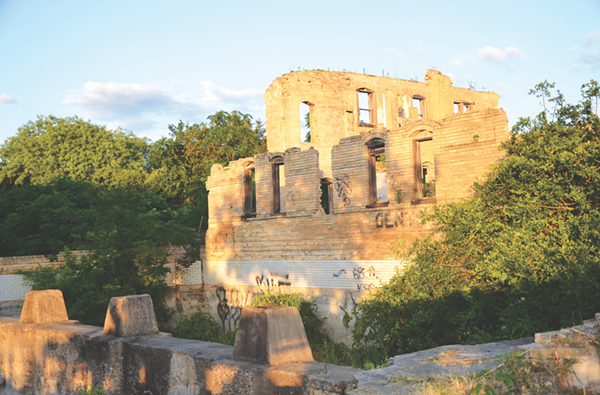 Bryan Rindfuss
If all the historical facts you know about the city of San Antonio center on the Spanish missions, and the anecdote that Pee-wee Herman came to look for his missing bicycle in the basement of the Alamo in 1985, it’s probably time to brush up on some of the lesser-known details about the Alamo City. We’re not asking you to take a Texas history class or anything. Simply, read on for some fascinating and fantastical facts and folklore that make San Antonio one of the most interesting places to hang your hat.

Bonham Exchange
The history of the iconic Bonham Exchange nightclub goes back 127 years when a German athletic association purchased the land at 411 Bonham on the east side of the downtown area and erected a building to open a German social and athletic club. The venue also housed a gymnasium, bowling alley and grand ballroom for formal events. After the Great Depression, the facility was used as a USO office and later as a storage facility for the post office. In 1980, Arthur “Hap” Veltman purchased the building for a new gay nightclub. The Bonham Exchange has been open since 1981 and has seen a host of celebrities perform there, including Tina Turner, the Ramones, Debbie Harry and Iggy Pop.

Donkey Lady & Ghost Tracks
The Donkey Lady is said to be a mid-19th-century settler woman who was burned and disfigured inside her home by assailants, but managed to jump off a bridge at Elm Creek near Applewhite Road on the city’s Southside. Today, the Donkey Lady roams around the area leaving hoof prints and scaring anyone who gets too close. (Fun fact: Donkey Lady Bridge even boasts its own location on Google Maps — complete with 38 reviews.) As for the Ghost Tracks, the legend claims that a train collided with a school bus and killed all the children on board, who now haunt the train tracks where the accident occurred. If you put your car in neutral near the area, the ghost children will allegedly push the car over the tracks and to safety — and leave their tiny handprints behind if you sprinkle your vehicle with baby powder.

Fairmont Hotel’s Historic Move
In 1985, in a successful attempt to save the 79-year-old Fairmont Hotel from being bulldozed to make room for new developments, the city and the hotel’s new owners decided to move the 3.2-million-ton inn half a mile to its new location. The structure was raised off the ground, essentially placed on wheels and rolled down the streets of downtown. The six-day trek made national news, especially since part of the hotel’s journey was to roll across Market Street Bridge, a feat many said could not be done.

Hilton Palacio del Rio’s Modular Construction
Constructed specifically for the 1968 World’s Fair, the 21-story Hilton Palacio del Rio is noteworthy because its architects used modular construction techniques to erect the building. Basically, the hotel was built in small blocks (or modules) at another location and then transported to the site and stacked to create a hotel just in time for HemisFair’s opening.

Hot Wells Resort and Ruins
This well was originally drilled in 1892 to supply water to the Southwestern Lunatic Asylum (later known as the San Antonio State Hospital). But the hot water that sprung from the Edwards Aquifer wasn’t potable, so it was leased to a gentleman who opened a resort and advertised the healing powers of hot sulphur springs. The bath houses attracted celebrities and dignitaries, incuding Will Rogers, Charlie Chaplin, and President Teddy Roosevelt. After many years of being in ruins, plans to create a public park on the land have recently emerged.

Red-Light District
Also known as the “Sporting District” in the early 20th century, tourists and citizens stop in this area of San Antonio to visit its taverns, gambling halls and brothels. It was considered the largest red-light district in the state and third largest in the U.S. Although prostitution was illegal in the city, the mayor at the time allowed prostitutes to work inside a 10-block radius near Market Square — just so long as the brothels were paying fees to the city.

World Record for Tamale-making
You don’t have to go too far back in the history books (or in this case the Guinness Book of World Records) to learn that San Antonio was the location where a world record for tamale-making was born. In December 2011, the Westside community gathered at Lanier High School for a tamalada and made 17,106 tamales in 10 hours. Consider it masa for the masses.