Painting with a Plate: San Antonio chefs create edible works of art that are as tasty as they are beautiful

Some San Antonio chefs take the phrase 'eat with their eyes first' to a whole different level. 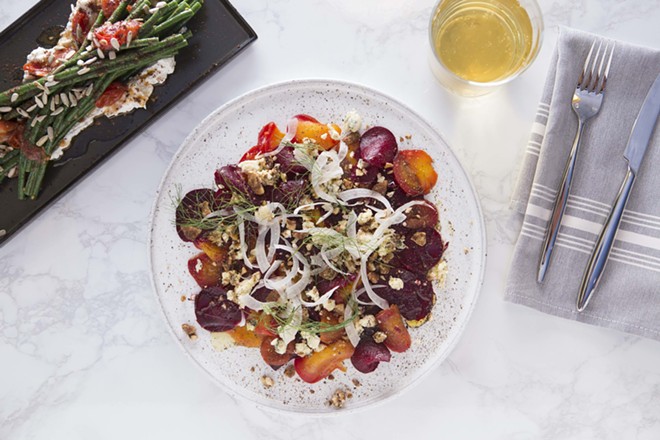 Jessica Attie
San Antonio’s Clementine turns out visually stunning fare in Castle Hills.
Foodies know the moment of ethereal pause that occurs when a plate of gorgeous food is placed on the table. It’s almost a spiritual event. You feast first with your eyes, wondering if what’s in front of you is too pretty to eat.

Of course, you end up eating it anyway — the aesthetics of the plate becoming less important as your hunger grows. But we’re right to consider just how much thought and effort goes into these beautiful creations before they arrive at our table.

For Elise Russ, pastry chef and co-owner of San Antonio’s Clementine — a new-American restaurant known for Southern-inspired fare that also happens to be pleasing to the eye — the visual artistry is a chance to unleash her creative spirit.

“My mom and my two sisters are really artistic; our house was very centered around the arts, but I can’t draw to save my life,” Russ said. “I grew up in Atlanta, and my mom would take us downtown for art lessons and art classes, and I was just awful. But I feel like that’s why my pastry is my creative expression now. It balances everything else that we have to deal with, like managing the books and the staff and everything. So, you get this one outlet where you really get to just make something beautiful.”

“There are often dishes that hide behind other dishes that we don’t even see until we’ve worked with it for some time,” he said. “You just keep revising. I think that that’s a big space where most chefs have to find their reality. You sometimes have to put something out that’s not perfect and allow the guest interaction to help evolve it.”

A lesser-known part of the design process that goes into a menu item includes careful consideration of the serving vessel. In the case of nationally renowned Mixtli Progressive Mexican Culinaria, part of each menu’s budget is dedicated solely to commissioning custom dishware from a handful of artisans, including Melina Lozano of San Antonio’s Agave Muerto Clay.

“For me, the biggest inspiration when it comes to creating a dish starts with the vessel in which we’re going to plate it,” said Mixtli chef and co-owner Diego Galicia. “That’s where you’re going to paint this story, you know: is it paper, is it a canvas or a plate? We’ve used everything from wood to rocks to ice … . A plate shouldn’t just be something where you deposit a food item. That’s why, to us, it’s so important to have something beautiful to serve the food in or on, because it’s a pedestal that elevates what we’re trying to do.”

Mixtli’s relationship with earthenware artists showcases the beauty of their handcrafted vessels. In turn, that complements the eatery’s dedication to old-world techniques and ingredients in its execution of hyper-regional fare. Aside from the simplicity and precision that dictates the visual presentation of Mixtli’s food, the chefs said the layout of each plate guides the diner in how to consume it. 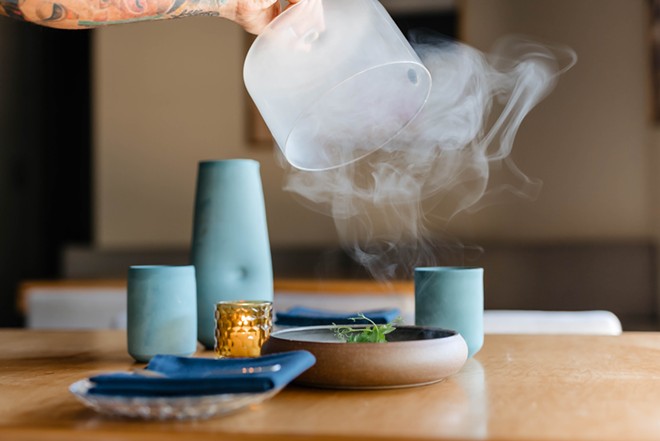 Adah Esquivel
The team at Mixtli covets its relationship with earthenware artists such as San Antonio’s Agave Muerto Clay.
Understanding the appeal

Since the emergence of the over-the-top presentation trends of the 1980s, researchers have gained a new interest in exploring the subjective aesthetics of food. Indeed, recent research suggests that consumers consider pretty, “Instagrammable” food to be healthier or better-tasting based on its visual appeal.

A study by the Crossmodal Research Laboratory at the University of Oxford served 30 men and 30 women one of three salads containing the exact same 17 ingredients — the only difference was in presentation. Researchers determined that the plates considered more artistic and more complexly presented were more liked than the other presentations.

Subsequent studies by James Beard Award-winning food journalists and the National Library of Medicine support claims that the aesthetic appeal of dishes influences perceptions about their taste. Participants in the research gave higher taste ratings to dishes with artistic presentations and expressed a willingness to pay more for them.

That shouldn’t come as a surprise, Clementine’s John Russ said. He noted that San Antonio has no shortage of chefs who understand that diners eat with their eyes.

“Just like a good oil painting or a statue or an engraving all have different textures, I think some of the most beautiful dishes are not just appealing in their physical composure, they’re interesting and thoughtful in all ways: complementary flavors, varying texture and composition,” he said.

“We’re lucky to have local chefs who are able to create art like that and share with guests and potential guests on multiple platforms. It speaks volumes about what we can look forward to in San Antonio’s culinary landscape.”