The self-described 'Demon Queen of Seattle' requests that you 'get your ass out and horns up' for her pair of Bonham Exchange performances. 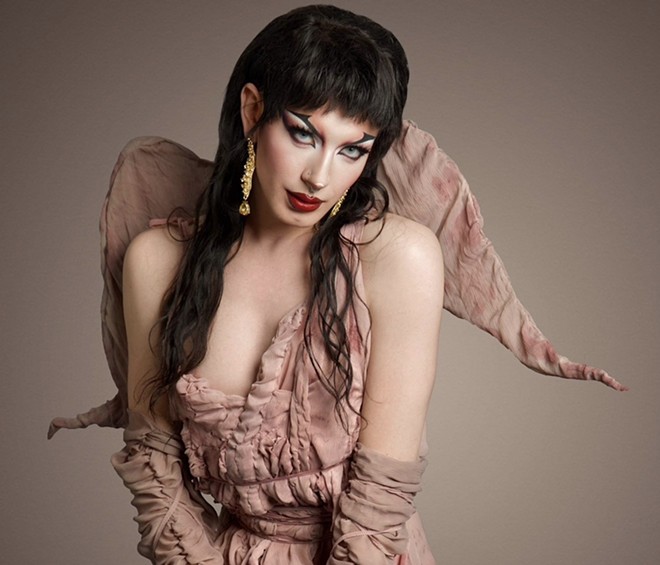 Courtesy of Rey Lopez Entertainment
Bosco tied for third place alongside Angeria Paris VanMicheals and Daya Betty in Season 14 of RuPaul's Drag Race.
RuPaul's Drag Race Season 14 was a wild ride with twists and turns aplenty, perhaps none more suspenseful than a Willy Wonka-inspired golden chocolate bar with the power to save one lucky queen from elimination.

But the season also made franchise herstory through transgender visibility, with a total of five contestants identifying as trans by the time filming wrapped: Kerri Colby, Jasmine Kennedie, Kornbread "The Snack" Jeté, Willow Pill and Bosco.

Raised in Montana and based in Seattle, Bosco snatched her name from her childhood dog. "He's not using it anymore — he's dead — so now it's mine," she explained.

A burlesque-style bombshell with legs for days and sharply winged eyebrows inspired by anime villains, Bosco made runway statements with looks she summed up as "equal parts evil and naked." That signature blend of glam and horror was exemplified in ensembles involving bedazzled horn boobs, rhinestone blood splatters and a terrifying tutu resembling a circular saw.

A fierce competitor who won three maxi challenges — including a quick-witted roast of judge Ross Matthews — Bosco fought for the leading role in Moulin Ru: The Rusical but her portrayal of showgirl Saltine landed her in an elimination lip-synch against San Antonio-born Jorgeous. Although Bosco lost to the season's "lip-synch assassin," she was saved by the golden chocolate bar she was unwittingly holding.

Safe to slay another day, she remained in the competition all the way to the finale, where she performed her original song "Devil" and ultimately tied for third place alongside Angeria Paris VanMicheals and Daya Betty.

The self-described "Demon Queen of Seattle" requests that you "get your ass out and horns up" for her pair of Bonham Exchange performances presented by the ever-reliable Rey Lopez Entertainment.