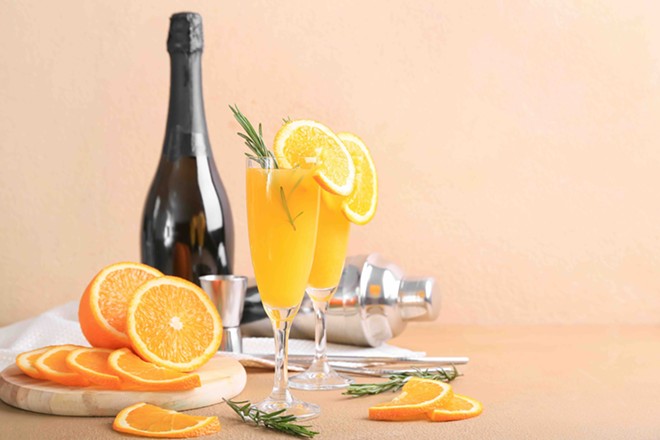 Shutterstock
There's more to brunch cocktails than just mimosas.
Despite often being a mix of flabby Prosecco and pulpy orange juice from a cardboard carton, the mimosa remains inexplicably popular in brunchy settings coast to coast.
That description get your blood pressure up? Relax. It’s all good.

Apart from the indisputable fact that any decent bubbly is better on its own, the Mimosa isn’t inherently evil when made with freshly squeezed juice and a just-good-enough sparkler. To make the ritual drink even more fun, there are places in San Antonio that set you up with a bottle of bubbles and juices on the side to combine as you wish. For that option, consider Nola Brunch & Beignets (720 E. Mistletoe Ave., eatatnola.com).

Yet one could make the argument that other lazy-morning drinks with citrus and bubbles are far more enjoyable. Those include variations on the mimosa meme, such as one at Cappy’s Restaurant (5011 Broadway, cappysrestaurant.com) that switches the OJ for lemon and includes hibiscus, triple sec and agave.

But if it’s really the bubbles that float your brunch boat, I’d head instead to a French 75. The classic drink consists of gin, lemon juice and simple syrup shaken, strained into a flute, then topped with Champagne — the real stuff. It’s brisk enough to cut across a serving of eggs Benedict yet festive enough to seem like the indulgence that it is. Liberty Bar (1111 S. Alamo St., liberty-bar.com) does a variation called the Liberty 85 with gin, St. Germain, grapefruit juice, lemon juice, Peychaud’s Bitters and a cap of Cava.

Setting aside the sparkling wine but sticking with the citrus, there’s another world of a.m.- appropriate drinks to uncover. And what better name than tequila sunrise to set the stage for an epic brunch? First pour tequila into a glass, then follow it with orange juice and grenadine, which all settle into a beautifully layered drink that’s not stirred. If brunch becomes an all-day affair, the tequila sunset adds a splash of soda water — which you’ll need by that point. The typical garnish for either cocktail is an orange slice and a cherry, which are just enough to look festive without tipping over into parody.

Keeping with the same color palette, the Garibaldi is also built in the glass, and it involves even fewer ingredients: Campari and orange juice. Perfectionists would have you “fluff” the OJ by whirling it in a blender or using a handheld frother. But even un-fluffed it’s a great drink. Check it out at Barbaro (2720 McCullough Ave., barbarosanantonio).

Returning to tequila, but shifting the citrus focus to grapefruit, we inevitably arrive at the paloma. In its simplest form, the components are blanco tequila, lime juice and grapefruit soda such as Squirt. A salted rim is optional. Nowadays, the cocktail may be served to you with fresh grapefruit juice and sparkling water, or it might even contain a grapefruit cordial as at The Hoppy Monk (1010 N. Loop 1604 East, thehoppymonk.com).

Perhaps because it requires a specific bottle of booze that pretty much has this one drink as its raison d’etre, the Pimm’s cup hasn’t achieved a lot of brunch traction — yet undeniably pretty and refreshingly herbal, it’s a perfect brunch companion. In addition to Pimm’s No. 1, cucumber is a must, as is orange. But from there, the possible add-ins and garnishes are legion: think strawberry, apple, rhubarb, mint or basil — all topped with ginger ale or sparkling lemonade. It’s a classic favorite at Wimbledon. Get a taste locally at the Esquire Tavern (155 E. Commerce St., esquiretavern-sa.com).

The Pimm’s cup garnishes are integral to the drink, not mere Carmen Miranda millinery on top. Brunch stalwart the bloody mary, on the other hand, can go entirely tail-wagging-dog on us in the decor department. In its primal form, the drink is merely canned tomato juice with vodka, a little Worcestershire and hot sauces, a lemon wedge and a stalk of celery. But does any brunch worth its salt serve it this way? Nope.

Bacon — whether fried, candied or infused into vodka — is naturally popular. And so are pickled goodies such as those that adorn the bloody mary made with a house mix at Whiskey Cake Kitchen and Bar (15900 La Cantera Parkway, Suite 21200, whiskeycake.com.)

It’s clear that this is a battle that can’t be won. So, best experiment and find what suits your fancy.

Here’s a recipe I developed for a guest bartender stint at Dorćol Distilling & Brewing Co., pre-pandemic. This variation uses Dorćol’s Kinsman Rakia, but vodka is an acceptable substitute.

Method:
Muddle tarragon, shake with all other ingredients and double strain into chilled highball glass with rocks. Garnish with speared olives. Pickled carrot is optional but a great color contrast.