Tool frontman Maynard James Keenan's other band grabbed attention with its music — the videos, eh, not so much.

Mike McMahan
Puscifer performs at San Antonio's Tech Port Center + Arena on Saturday night.
Do you know what a merkin is? Do you hate cell phones at concerts? Do you like dance-y prog rock?

If you can check “yes” to all these questions and missed Puscifer Saturday night at San Antonio’s fabulous Tech Port Arena, what you’re about to read may cause pangs of regret.

Puscifer frontman Maynard James Keenan wants to make one thing clear: he hates phones at concerts. Just like at previous concerts from his biggest act, Tool, signs posted around the arena warned attendees that phones should stay in pockets during the performance under penalty of ejection.

And for anyone who missed that, a silly video opened Puscifer’s performance. It featured a costumed Keenan as bumbling “Agent Dick Merkin” warning the crowd with Max Headroom-style energy and edits that anyone using a cell phone during the concert would be ground up into Spam.

Keenan also used the “Merkin” character to lampoon the homogeneity of society in several taped interludes that took shots at anyone from that bleach blonde Tiger King douchebag to Justin Bieber to Fran Drescher to Mila Kunis.

The cell phone thing has all the subtlety of the Nazi hammers at the end of The Wall and runs in contrast to Keenan’s general theme of non-conformity — a.k.a. not following rules. The “live in the moment” message is spot-on for live art and entertainment, but some attendees may have found themselves thinking “dude, chill.”

A repeated phrase referenced “continued probing” with alien imagery on the video screens, ensuring that no one missed the “dick joke” aspect of the show. (The band name is a portmanteau of “pussy” and “Lucifer,” and a merkin is a genital wig. Feel free to google that one for a good time.)

As killer as Puscifer’s musical performance, the videos often came across as heavy handed. Keenan lives in some kinda new age wine fortress in Arizona. Can’t he just turn off the wi-fi?

Sure, TMZ is great to mock, and Keenan has a background in sketch comedy, which is an important thematic part of this act. And, true, pop culture is the usual whipping boy for Saturday Night Live skits. Still, the clips seemed to zero in on much-too-easy targets.

Perhaps the most important question to ask about Saturday’s performance is whether it overshadowed the music.

Thankfully, the answer was “not really.” The videos were successful in reminding the crowd that Keenan doesn’t take himself seriously, and they worked in that way. Much like Rush’s in-concert short films, they offset the serious nature of the compositions themselves and brought the performers down to Earth.

And, yes, the music was exceptional, combining synth-heavy, melodic songs with beats that are somehow danceable but often based in progressive rock-driven alternate time signatures. Isn’t that why the crowd — seemingly composed of the Tool faithful despite Puscifer’s decidedly non-metal vibe — was really there?

The band hit the stage with the largely drum-free “…Bread And Circus” from its most recent album, Existential Reckoning. The musicians stood in a Kraftwerk-inspired formation that hinted what the crowd was in for. The more driving follow-up, “Postulous,” got things grooving but kept the electro-pulse vibe.

The evening continued in this fashion. The first segment closed with “UPGrade,” a highlight from Existential, in which Keenan sounded like, well, himself, in a way that surely resonated with Tool fans. The video depicted lines from the song in a vintage personal computer-inspired green text/black background style.

The overall performance was divided into three sections offset with comedy videos. Keenan recycled a trick from Tool shows, offering an “intermission” before the third section, though it was seven minutes rather than the 12 used in Tool shows. 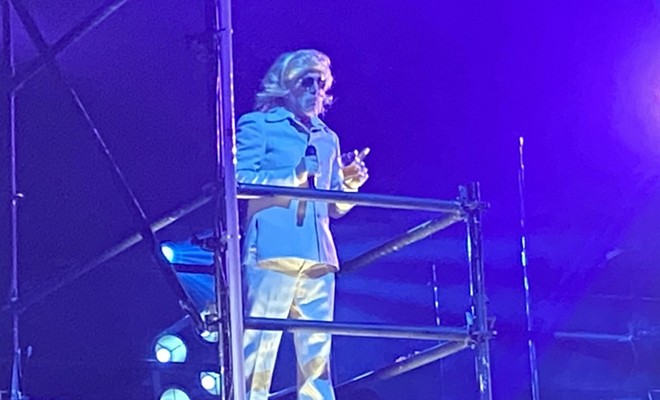 Maybe that extra five minutes is because Tool shows are more crowded, and the bathroom line is longer. Or maybe it’s some kinda numerological shit. With Keenan, it could be anything.

Post “intermission,” Keenan came out in the blond mullet wig that’s the trademark for his “Billy D” character, familiar from so many Puscifer videos. The penultimate moment of the show was “Conditions of my Parole,” the most traditional metal(ish) tune of the evening.

After that one, “Billy D” said that cell phones could come out for photos, adding that he “checked with Maynard and he’s ok with it — which is a lie, because he’s not ok with it.”

The evening closed with “Postulous” and its sung refrain “Everything will be alright.” Despite all the noise, that’s Keenan’s real message. He’s no Bob Marley, but when you get right down to it, Tool is about self-actualization. Puscifer reminds us that music is great and can save your life in this messed-up world, and it’s perfectly fine to laugh. Maybe even required.

Things kicked off with Night Club, an appropriately named outfit from Los Angeles. It’s fronted by the charismatic Emily Kavanaugh who fired the crowd up for the main act, backed only by the pulsing tracks of DJ Mark Brooks, also known as 3 Kord Scissor King.

The apropos band provided a taste of what was to come, and the crowd listened politely. But when you’re playing for Keenan’s cultish fans, it’s a tough sell.