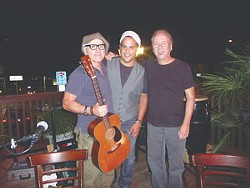 
When Mike and Millie Van Steenburg bought the fairly nondescript restaurant the Hungry Horse, they had a specific plan in mind. The goal was to redesign the space as an artist-friendly supper club that would showcase original singer-songwriters. Their go-to guy for the project was Matt McCormack, a musician from Tennessee with impressive contacts in the Austin music scene.

Last month, the venue had a soft opening as the Republic House. When Bar Tab showed up, McCormack was just finishing a set on the patio, singing to a laid-back crowd chatting over their beers. When the waitress stopped at our table, she practically whispered that, for that evening at least, drinks were on the house. A little confused by the freebies, I later quizzed McCormack, who explained that the venue’s liquor license was still pending: “Oh, we’ve got one, it’s just not here yet. Until then, we’re giving drinks away.” Bar Tab fully approved of this concept, so we sat back down and ordered another round.

Next up was Bill Carter, who as it turns out, is a fascinating character and one of the Republic House’s regular acts. McCormack told me, “You’ll like this guy — he’s kind of a legend. He’s written songs for Stevie Ray Vaughn and Brian Setzer. When you get a chance, look up a band called ‘P.’”

The overall sound of the bands at the Republic House is unplugged alt-rock with hints of country and blues mixed in. What’s refreshing is the absence of cover bands, and the sensible volume level seems to put patrons at ease. Most people in the crowd seemed to be in their own worlds, applauding after each song, but then quietly resuming conversations. It reminded one of my pals of the super-casual music halls of Gruene and Luckenbach.

Later that night, I googled “P.” Here’s what I found: In 1993, Carter met Johnny Depp while What’s Eating Gilbert Grape? was shooting in Manor, Texas. The two became friends and decided to form a psychedelic punk band called “P” with Butthole Surfers frontman Gibby Haynes and actor Sal Jenco as members. P released one eponymous album on Capitol Records with original songs as well as an ironic cover of Abba’s “Dancing Queen.” Occasionally collaborating with Flea (Red Hot Chili Peppers) and Steve Jones (the Sex Pistols), P played a handful of random gigs in Austin and at L.A.’s Viper Room, where Depp was co-owner. In fact, they played there the night of October 30, 1993. While P was onstage performing their song “Michael Stipe,” which mentions River Phoenix, the actor was having an ill-fated drug overdose on the venue’s sidewalk.

Carter isn’t the only big-name talent McCormack has brought to SA. Will Sexton has already played the Republic House twice, and it hasn’t even officially opened. Buzz-worthy Latin rockers Del Castillo are scheduled to play the venue’s first New Year’s Eve party. Even McCormack, who can be found there every weekend, is no stranger to commercial success. His song “Pride,” from 2003’s Here We Go, is about to be re-released, sung by Gene Simmons of KISS. Another McCormack song, “Easy for You,” was featured on the soundtrack of the film Dead of Winter.

Now that the Republic House is starting to take shape (the grand opening is this Friday), the live music has moved from the patio to a newly finished indoor stage. The crowd is still easygoing, but is slowly growing in size, even attracting some of the King William set.

Thanks to McCormack, there’s no need to drive 70 miles to get a taste of Austin’s eclectic music scene — he’s brought it to SA. — Bryan
Rindfuss