10 San Antonio Dishes to Die For

San Antonio Current foodies have sampled countless plates, driven countless miles and spoken to countless chefs this year in search of great food. As further proof our city is cooking up great things, here are our recommendations of the 10 best dishes we experienced this year. 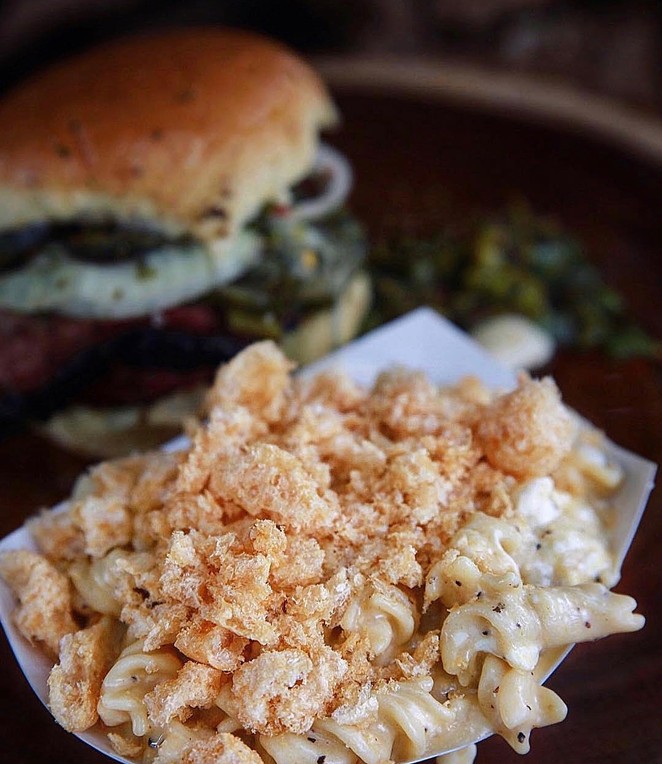 Courtesy of 2M Smokehouse
An instant hit from the moment it opened, 2M proved that San Antonio will stand in line for Q. Revisions to the line’s configuration now mean that most won’t have to shiver in winter weather. A recent wait, mostly indoors, was 45 minutes — and that with getting there just before opening time. It’s still worth it for brisket that is, no other word for it, sensational. The bark is rugged and pepper flecked. And the sub-crust layer of fat infuses the tender meat with its melting magnificence. The simple, slow-cooked pork ribs continue to please as well. But you will know to order these. What we’re suggesting here as a don’t-miss must is the truly inventive mac n’ cheese. The genius addition of crunchy chicharron vaults this SA variation on the popular dish into a league of its own — far beyond other truffled and tricked-out renditions. Don’t miss it. 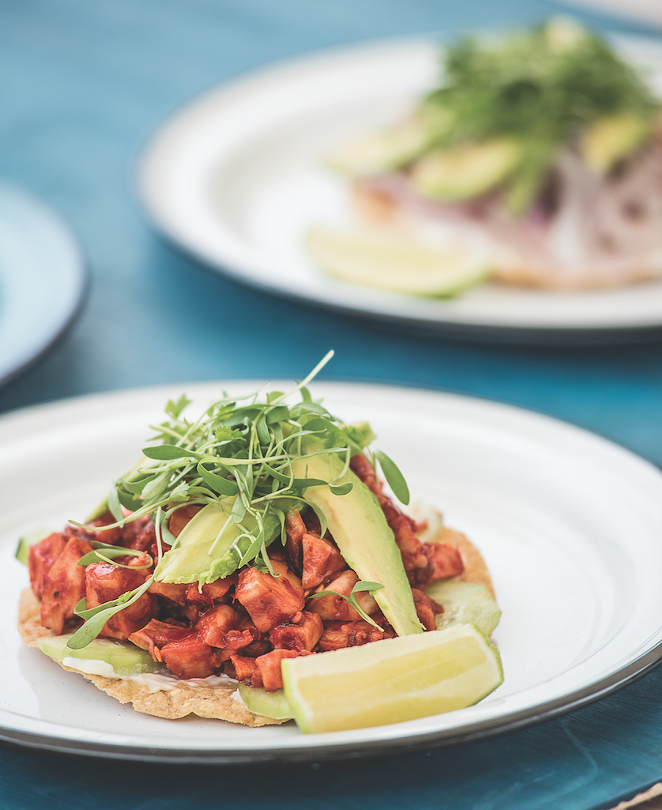 Jessica Giesey
San Antonio has a love-heat — yes, “heat” — relationship with outdoors eating. When the weather is good, there’s no better choice than anywhere al fresco, but when the heat's blazing down, look out. But there’s no other choice at Carnitas Lonja —and it’s worth sweating for the establishment’s well-stuffed tacos and tortas. Now that sibling Fish Lonja has opened with an indoor option, most still opt for picnic tables when amenable. Seems beachier that way. To keep the vibe going, you could order the fish taco, but the tostada de ceviche is a better choice. The fresh and unusually clean-tasting tilapia is cut into strips, tiradito fashion, red onion takes on a tang from its citrus soaking, some sprouts add a usefully decorative touch, and a mayo bed provides a creamy contrast for the works—no extra sauce needed. To complete the coastal image, add one or more Clamachela, complete with a tall Modelo Especial to add to the icy mix at will. 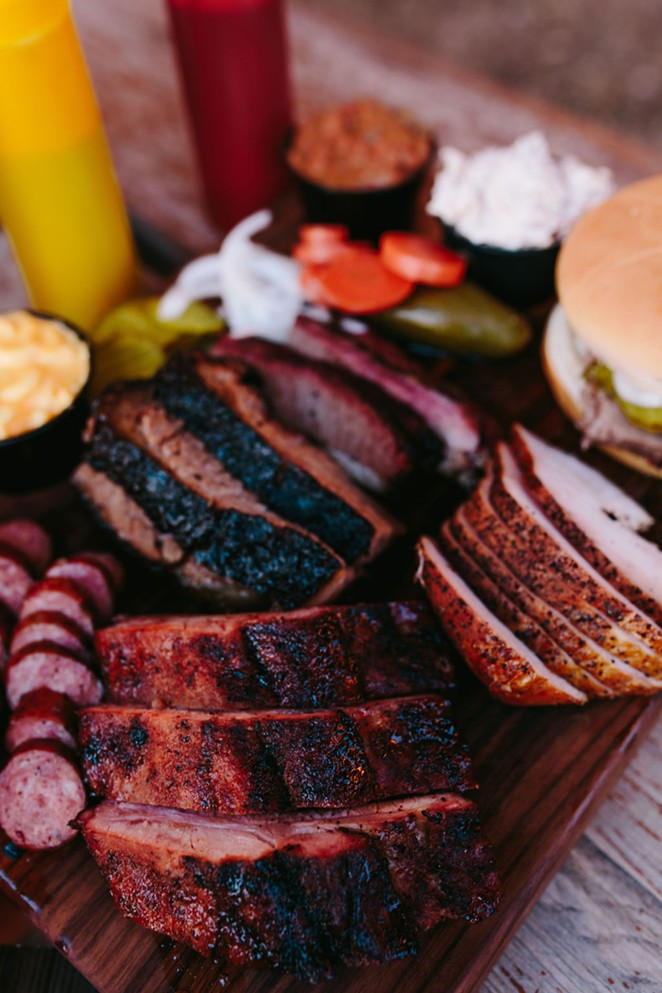 Courtesy of Alamo BBQ Co.
Most hardcore BBQ freaks are unlikely to admit patronizing joints run by big-C chefs. Not pure, perhaps. But Jason Dady — one of San Antonio’s biggest-C local chefs — and crew have made a go of it for some time now. First at Two Bros. BBQ Market, then at Alamo BBQ on Grayson. It’s tempting to agree with the purists, but we were won over by many of Dady’s semi-cheffy takes on ’Q, including the cherry glazed baby back ribs at 2 Bros. Pork ribs are not pancakes: they don’t need a lot of syrup. And Dady realized that. More impressive are the even subtler peach-glazed baby backs at Alamo. They come to you with just the lightest lacquer and a little black pepper. They’re also rosy, tender, lightly smoky and not too fall-off-the-bone. (Where’s the fun in that? Gnawing the rib is part of the pleasure.) Sauce not needed, but for grins try a little of the also cheffy, and very powerful, sauce with espresso, black molasses and cider. Wowza! 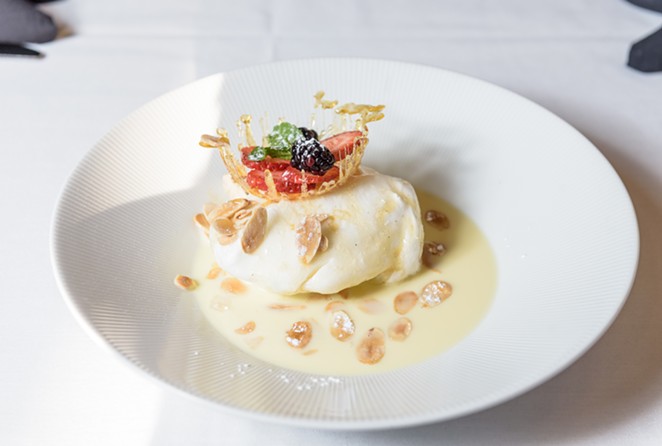 Jaime Monzon
Damien Watel has been a fixture — now really the only fixture — on the French dining scene in San Antonio for years. For that reason alone, his new Bistr09 in Alamo Heights — in a space once housing one of the few other French contenders, L’Etoile — is worth a look. Escargots? Check. Duck breast a l’orange? Check. Dover sole meunière? Check again. All are served in a setting that exemplifies the French chic brought by Watel’s wife and co-chef Lisa Astorga Watel. But if there’s a place for which the advice “save room for dessert” was made, it’s ’09. An example of the enduring power of the classics is Watel’s crème brulée, a fixture on the well-priced prix fixe menu. Its artfully torched top shatters with the tap of a spoon, revealing a luxuriously creamy trove beneath. That’s one, essential pick. A worthy second choice is the breathtaking and equally classic ile flottante, or “floating islands,” its clouds of meringue sailing atop a sea of silky crème anglaise. 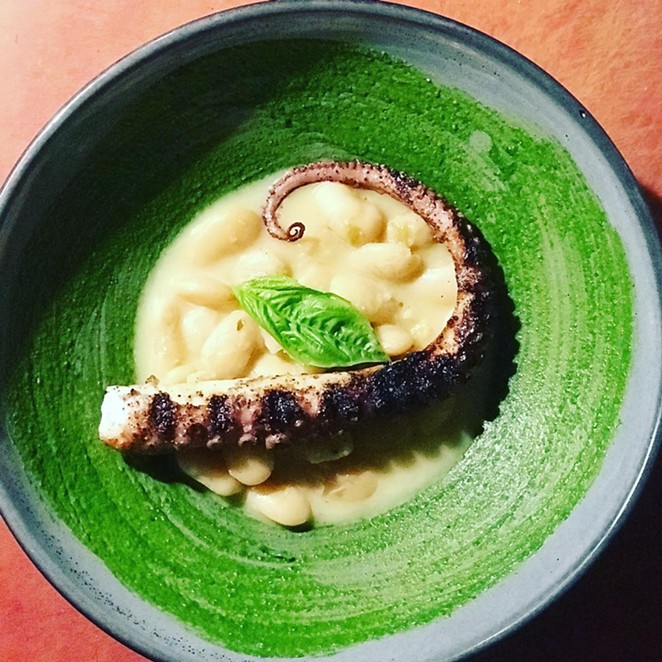 Courtesy of Rebelle
Octopus is a slippery critter to deal with, appearance aside. It turns out best when cooked either quickly or for a very long time. But as more popular seafood becomes scarcer — Gulf oysters are in serious decline, and the Northeast is experiencing massive scallop die-offs — octopus has been rearing its Star Wars-worthy head. And it turns out there’s another way to grapple with the tentacles: sous vide, in which a product is sealed in a bag and cooked at low temperature in circulating water. It’s unclear whether Chef Stefan Bowers does this before char-grilling his Spanish octopus, but it’s excellent by whatever means. Even before Rebelle recently changed its focus to seafood, the char-grilled, spice-crusted and astonishingly tender octopus appetizer was superb in almost every sense. Braised beans, spiked with guanciale and bathed in basil pistou, play an essential and savory supporting role. 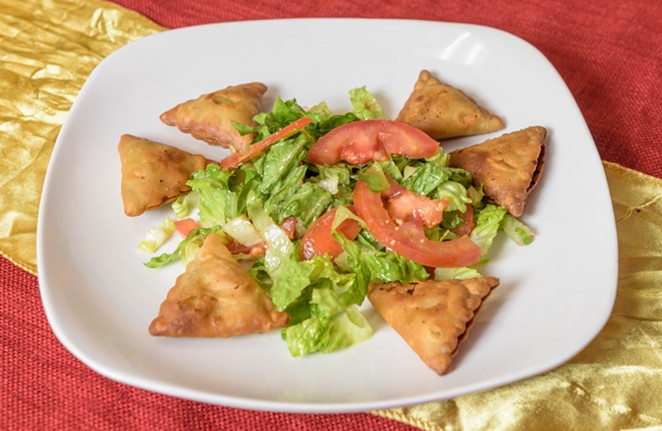 Jaime Monzon
Locals have had little opportunity to test drive Ethiopian cuisine over the years, but lately several options have emerged. One such is African Village, and, yes, if offers the usual platters of curried stews and such meant to be eaten out of hand with the traditional, spongy pancake called injera. But in the excitement of exploring a new cuisine, don’t overlook sides, starting with sambusas. The tiny dough-encased triangles are similar to Indian samosas. The veggie-stuffed version was accented with jalapeño, and the serving comes with a warm lentil salad that wasn’t overshadowed by the turnovers. 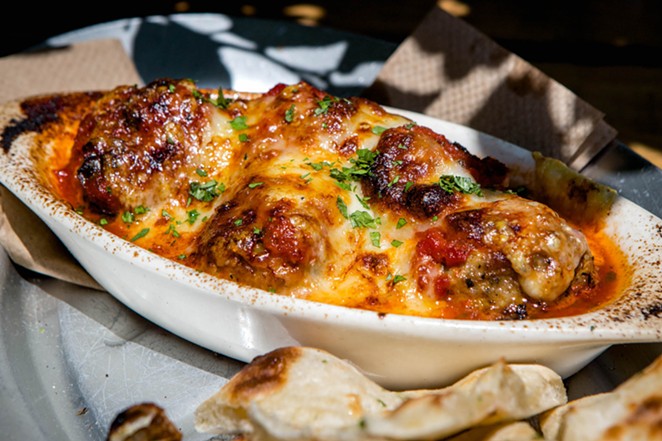 Courtesy of Il Forno
One of several spinoffs of Chef Michael Sohocki’s luxuriously locavore Restaurant Gwendolyn, has taken on a life of its own under resident chef Jason Garcia. A handmade pizza oven dominates an equally rustic space, and Lone Star locals line the picnic tables along with pols and pizza purists in search of pies such as the classed-up classic Americano with tomato, mozzarella and peperoni and the carbonara with garlic, mushrooms, guanciale and egg. While you wait, don’t fail to pass the time with one of the city’s best antipasto platters, including house-cured salumi and wedges of puffy, naked pizza among its many pleasures. Garcia also uses trimmings from his homey charcuterie, visible in a display case at the entry, to up the flavor ante in his meatballs, the stealth star of the show. Served in a simple tomato sauce, these exquisite orbs are unequivocally the city’s best. 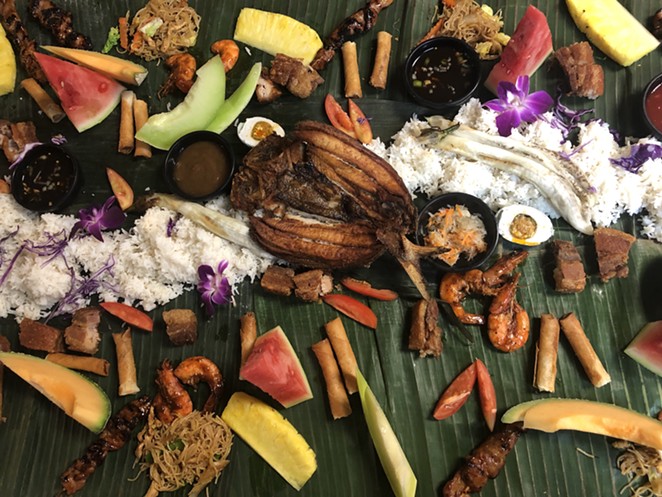 Lea Thompson
This family-owned spot has been serving up Filipino specialties and sweets for more than 20 years, but its real star is the Kamayan Boodle Fight, a family-style feast that requires diners to forgo utensils and eat by hand. For those new to Filipino food, the Boodle Fight is the perfect intro to a storied cuisine that continues to evolve and exchange with other cultures. Piles of rice heaped onto banana leaves and surrounded by crispy lumpia, lechon kawali (fried pork belly), pancit, flavorful fried Milk Fish, shrimp adobo and fresh fruits and vegetables. Technically, this is a shared experience rather than a single dish, but it’s one worth having. On the way out, stop by the register for baked goods like the mocha roll, pan de ube or casava cake, or stay for the halo-halo — a sweet, creamy dessert made with shaved ice and evaporated milk and served with tropical fruits and beans. 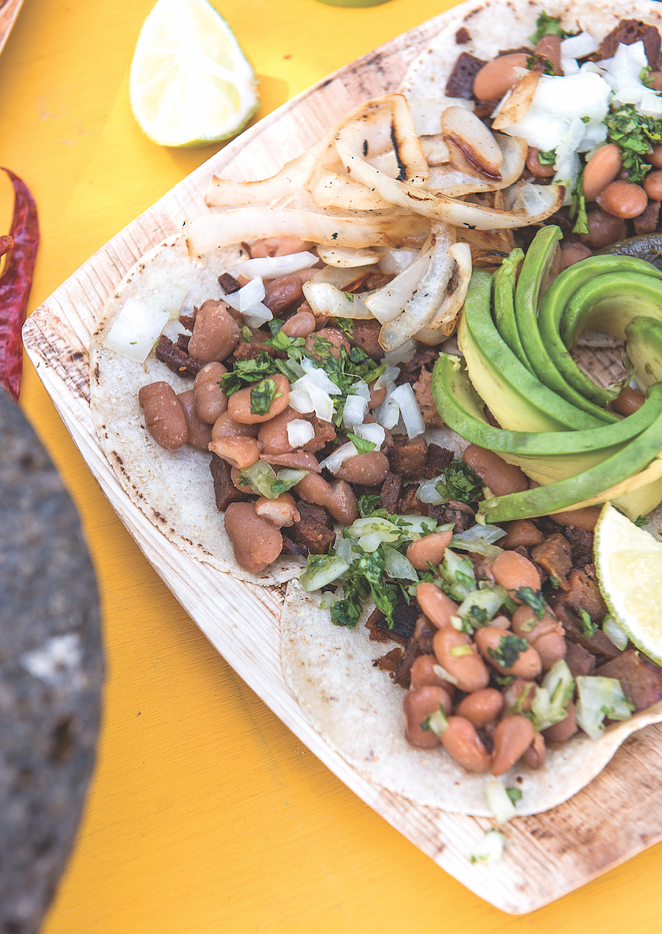 Jessica Giesey
At Tapatio Vegan Tacos, Araceli Pelayo-Gonzalez and her husband Eduardo Salazar deliver fresh, savory Mexican dishes that just happen to be 100% vegan. After adopting a meat-free lifestyle, the couple decided to share their home-kitchen creations with the community. They began selling the tacos at Brick at Blue Star’s Vegan Stop Shop in 2018, and the enthusiastic response led to the launch of a food truck. Since then, its offerings have grown to include oil- and gluten-free options in addition to spicy and flavorful salsas, sides and aguas frescas — all made from scratch. After just a year in business, the truck has found a loyal following with those who adore Tapatio’s street tacos, gorditas and tamales — made with vegan-friendly coconut cheese, butter and meat substitutes that can satisfy big appetites, vegan or not. 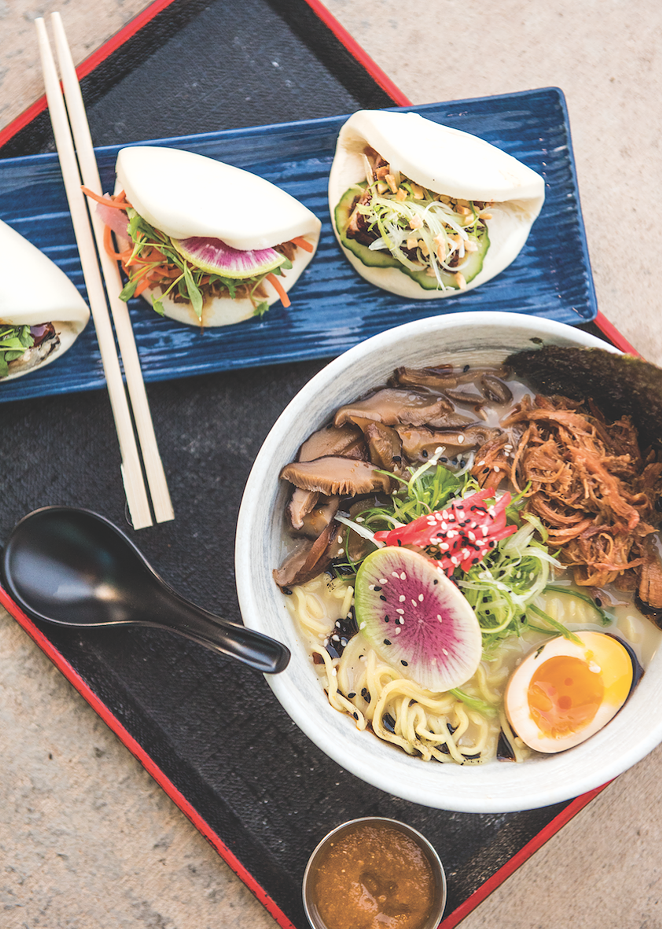 Jessica Giesey
At Noodle Tree, Mike Nguyen has worked to create a unique space that stands out from the ocean of strip mall and chain eateries in the UTSA area. His training, including a stint with chef Wolfgang Puck, has enabled him and his staff to consistently create great dining experiences. The proof is in the hakata ramen — ramen noodles swimming in pork bone broth and topped with a six-minute soy-marinated egg, pulled pork chasu, shitake mushrooms, fresh scallions, pickled ginger, sesame seeds, burnt-garlic and spicy chili oils. Key to the success of the dish and others at Noodle Tree is Nguyen’s insistence on using only high-quality ingredients and taking the time to honor them. The house-prepared pickled ginger, bao buns, fresh pork belly, savory broths and hot sauce give Nguyen’s thoughtful dishes an extra edge. When it’s gone, it’s gone.