100 Things To Do In San Antonio Before You Die 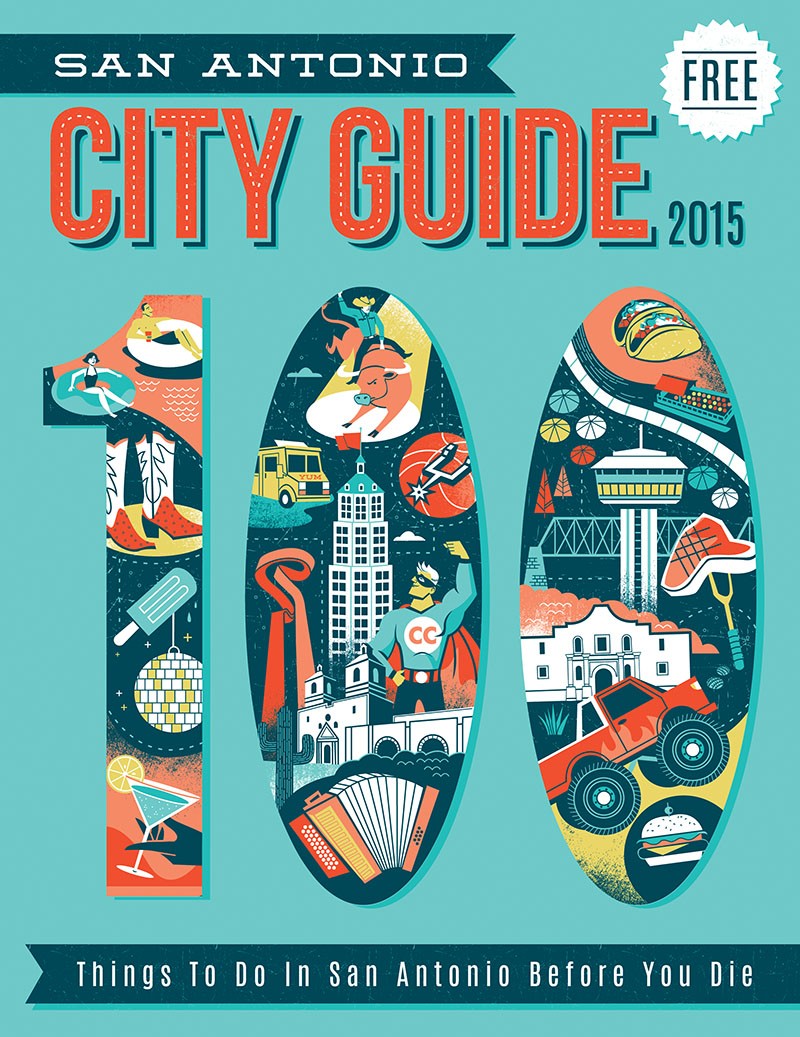 Whether you were born and raised here or are just visiting for the weekend, you'll likely notice that San Antonio is busy growing and evolving — doing so in its own distinct fashion, simultaneously embracing tradition and innovation.

While the expansion of our famed River Walk and continued growth around the Pearl Brewery have already transformed the look and vibe of our downtown area, other spots — from Southtown to Stone Oak — are going through significant booms of their own.

Seems fair enough to say that, as much as many people like to see the Alamo City retaining a traditional big town feel, in many aspects it's now resembling more of an image folks may have when thinking of the country's seventh-largest city.

So, no surprise that all this change comes full circle in terms of how we at the Current conceptualize and present to you our annual City Guide.

Last year, for example, we offered you a geographical approach, carving up the city into distinct neighborhoods or areas of interest (dining, shopping, nightlife, recreation, etc.).

This time around, we thought we'd take a different path. Why not, we thought, offer you a great conversation starter while at the same time provide you with some insight on great points of interest around our beautiful metropolis?

Hence our title: "100 Things To Do In San Antonio Before You Die." Catchy? We think so? Over the top? Maybe! Guess we really wanted to drive home the point that we feel they're all really good.

From obvious musts (the Mission Trail) to off-the-beaten path oddities (Barney Smith's Toilet Seat Museum) and campy traditions (Fiesta Cornyation), we tried to cram in a little bit of everything (in no particular order) to satisfy many tastes and preferences.

But hey, don't get us wrong, we don't even pretend to think we've got all the answers. Or even the best ideas, for that matter.

And the sheer reality is that there are more than 100 things you should experience here — we just had to draw the line somewhere!

If we left out one of your faves, apologies for the oversight, but please do let us know. We're all ears.

Oh, and despite the word "die" on the cover, we're not feeling morbid — we were just having a bit of fun. It's a great city with a rich history and a promising future, and all we want is for you to enjoy it here as much as we do.

100 Things To Do In San Antonio Before You Die

1. Embark On A Breakfast Taco Tour
2. Feel The Neighborhood Onda With A Tour Of San Antonio Murals
3. See A Show At The Arneson River Theatre
4. Fly Through The Hill Country With Wimberley Zipline Adventures
5. Share A Bucket Of Beer At The VFW Post 76
6. Unleash Your Inner Geek
7. Pair Historic Styles With The Jim Cullum Jazz Band At Tucker's Kozy Korner
8. Join An Intramural Sports Team
9. Play A Round At Cool Crest Miniature Golf
10. Make Friends With Pat At Niki's Tokyo Inn
11. Get Your Steak On At Bohanan's
12. Bike Or Canoe The Mission Reach
13. Spend An Afternoon At The Japanese Tea Garden
14. Debate Who Has The Better Puffy Tacos
15. Dress Your Dog Up For Fiesta
16. Wax Nostalgic With A San Antonio Zoo Animal Sculpture
17. Explore Your Late-Night Food Options
18. Dine Outside At The Grist Mill And See A Show At Gruene Hall
19. Brave The Alamodome
20. Tour San Antonio's Burgeoning Brewery Scene
21. Spot A Spurs Player In The Wild
22. Suffer Through Dinner At The Magic Time Machine
23. Do First Friday The Right Way
24. Take The Willie Nelson Pilgrimage To Floore's Country Store
25. Experience PechaKucha
26. Make A Run For It
27. Skip The Observation Deck And Have A Drink In The Tower
28. Take A Date To Luna Or Wayne Harper's Martini Club
29. Go Nutty With Cascarones In Hand
30. Catch A Show At The Carver
31. Take A Hike
32. Experience 'Una Noche En La Gloria'
33. Visit The Ghost Tracks
34. Spend The Day At The Pearl
35. Watch A Movie Outside
36. Take A Potty Break At The Toilet Seat Museum
37. Don't Forget The Other Games In Town
38. See A Touring Broadway Show At The Majestic Theatre
39. Take A Night Tour Of Public Art Installations
40. Follow The Food Trucks
41. Get In Shape With Fitness In The Park
42. Dance To San Anto Rhythms At The Tejano Conjunto Fest
43. Make The Most Of Artpace
44. Pair Sustainable Eats And Texas Brews At The Cove
45. Stargaze With The Sidewalk Astronomers
46. Ask An Alamo Tour Guide If You Can Visit The Basement
47. Summon The Spirit Of Robert Johnson
48. Ride A B-Cycle
49. Browse LPs At Alamo Records And Janie's Record Shop
50. Take A Driving Tour Of Historic Neighborhoods
51. Hit Up The Old-School Spots
52. Hunt Down The Paleta Guy
53. Read A Book At 'Enchilada Red'
54. Catch A Hometown Hero In Concert
55. Visit SAMA On Free Tuesdays
56. Drink Booze For Breakfast At Cobalt Club
57. Celebrate A Spurs NBA Championship
58. Attend Fiesta Cornyation
59. Make Yourself Sick Riding Every Six Flags Fiesta Texas Roller Coaster
60. Play Tourist At El Mercado
61. Watch San Antonio|The Saga
62. Join The Hall Of Foam At Hills And Dales
63. Go Antiquing on Hildebrand
64. Dive Into The DIY With A Mondo Nation Show
65. Waste Fuel Driving The Entirety Of Loop 1604
66. Unwind In The Botanical Garden
67. Indulge In A Mariscada De La Reina
68. Ride Your Bike Across The Hays Street Bridge
69. Play Name That Latino At Pico De Gallo
70. Have Lunch At Schilo's
71. Wake Up For Barbacoa And Big Red At Mimi's
72. Go Caving!
73. Booze Your Way Down The North Saint Mary's Strip
74. Get Cultured At The McNay
75. Stuff Your Face With A Whataburger Whatafarm
76. Visit The Buckhorn Saloon & Museum
77. Submerge Yourself In Latin Cinema At CineFestival
78. Drink With Ghosts At The Menger Hotel
79. Ride The Brackenridge Eagle
80. Take A Class At The Southwest School Of Art
81. Indulge Your Inner Slytherin At The Snake Farm
82. Eat A Macho Burger At Chris Madrid's
83. Learn About Mexican Free-Tails At Bat Loco
84. Take In A Performance At The Tobin
85. Have A Nooner At A Skeezy Motel
86. Get Your Swing On At Sam's
87. Stock Up On Fireworks
88. Play Pretend Tourist And Ride A River Walk Barge
89. Take In A Show At Laugh Out Loud
90. Party At The Bonham Exchange
91. Scour The Southside's Flea Markets
92. Try On Stetsons At Paris Hatters
93. Browse Bookstore Row
94. Overdose On Openings During Contemporary Art Month
95. Play Bingo At Randy's Ballroom
96. Go Tubing!
97. Wake Up Insanely Early For The Cowboy Breakfast
98. Treat Yourself To A Staycation
99. Do A Gay Bar Crawl On The Main Strip
100. Dive Into San Antonio's Cocktail Renaissance