Zavala opened Not For You Gallery at the Blue Star Arts Complex last year with her partner, Edward Perez. Creativity was discouraged in the conservative, religious household Ursula Zavala grew up in on San Antonio's South Side.

Her parents tried to steer her toward a practical career as a doctor or lawyer, but Zavala was more interested in finding her way in the less-tangible realm of art. Some of her earliest art-making memories center around collages she made from junk mail — specifically Toys "R" Us circulars she fished from the mailbox.

"I was really poor as a kid," Zavala told the Current during a recent interview. "I would clip out ads for toys [and make collages of] things that I wanted. Now that I think about it, I was manifesting in my own weird-kid way."

Little did she know, collage would help her become who she is today: a confident, working artist and the director of a free-spirited gallery in the Blue Star Arts Complex.

After graduating from St. Gerard Catholic High School, Zavala studied art at Our Lady of the Lake University and San Antonio College, but the practical applications of what she was learning eluded her.

"I remember not really being good at anything — I was just kind of learning techniques," she recalled. "I ended up not finishing [my senior year] because my mom passed away. That was a huge thing that happened to me."

Since she knew how to cook, Zavala worked in restaurant kitchens for years — all the while struggling with the concept of becoming an artist.

"I knew art was what I wanted to do, but it just felt weird," Zavala explained. "It felt like I was wearing the costume of an artist — but I wasn't really an artist inside the costume."

Zavala began to shed that perceived costume in 2014. During a lull between kitchen jobs, she started marketing herself as a freelance graphic designer.

"I learned how to use Illustrator and Photoshop in school," she said. "I would dabble here and there — just kind of messing around, nothing crazy. But then I was like, 'I gotta eat.' So, I would put ads on Craigslist — really trying to put myself out there — and ended up doing logos for like $20. It was kind of rough."

In the midst of those early forays into graphic design, Zavala happened upon vaporwave —  a peculiar niche of electronic music that birthed an equally odd strain of visual art riddled with retro computer graphics, pixelated imagery and Greco-Roman statues.

Chronicled in a 2016 Esquire story titled "How Vaporwave Was Created Then Destroyed by the Internet," the microgenre sparked a lightbulb moment for Zavala.

"I was like, 'I can make art like this,'" she said. "I liked that it was all about '90s nostalgia, capitalism and integrating the concept of fine art and art history."

Once she found her footing within the confines of vaporwave, Zavala started sharing her digital collages on Instagram as Acidwinzip — a moniker she obtained from an online steampunk name generator. 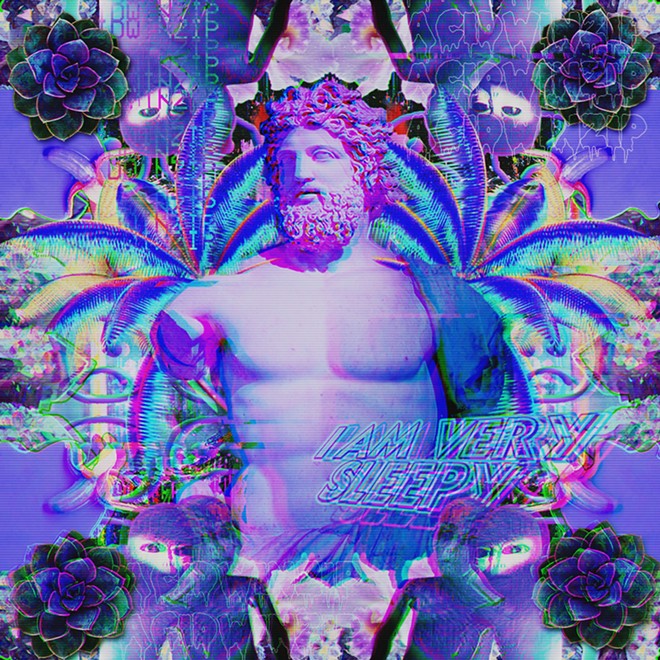 "It wasn't meant to be serious," said Zavala, who briefly considered adopting the alias Netscape 666. Nevertheless, as Acidwinzip she deftly harnessed the visual irony of vaporwave in digital creations celebrating anything from Lana Del Rey and Nokia cell phones to 7-Eleven Slurpees and Whataburger takeout.

At some point along the way, Zavala started adding San Antonio-specific hashtags to her social media posts — #satx and #saart among them, which helped catch the attention of Provenance Gallery director Stephanie Torres, who offered Zavala her first exhibition. Unveiled in January of 2017 — with the appropriately meta title "File>Save For Web" — that show essentially proved that Zavala had arrived as an artist.

"I got a lot of really good feedback on that show," she said. "And that was so surreal. ... I sold a few pieces, even a big one. I was so worried that people weren't gonna consider it real artwork — because it was mainly digital prints. That was a big concern. I even had somebody ask me, 'Are you worried that people don't consider digital art real art?'"

An admitted "social creature" who lives with her elderly father, Zavala felt particularly tortured by the nature of quarantine.

"All the introverts were having the time of their life, [but] I hated it," she said. "It took a big toll on my mental health. I couldn't go anywhere, couldn't do anything. TV got boring, YouTube got boring. ... I developed really bad anxiety. ... It felt like I had like a bomb on me and I didn't know when it was gonna go off."

Having maxed out on screen time, she dug out some old art supplies and went analog. She made a series of abstract watercolors and sold them at the local print fair Paper Trail. She also found solace in sewing. After discovering a "mini quilt" tutorial online, she got hooked by the meditative repetition of hand-stitching and soon found a way to incorporate it into her work.

"It's really relaxing," Zavala said. "I saw a lot of people hand-sewing online and ended up doing a lot of research on that. I love sewing. So, I started sewing a bunch of mini quilts. My first big quilt says "Hell Is Real" — in Helvetica font. It's supposed to resemble those [religious] billboards that you see on the highway. ... After that I made this other quilt that says "The End Is Near."

Apocalyptic messages aside, the quilts helped Zavala transform her anguish into something positive — and took her artistic practice to an entirely different level.

Last spring, Zavala's boyfriend Edward Perez came across an opportunity to rent a space in the Blue Star Arts Complex. Excited by the idea of sharing a studio spot, the artist couple secured it sight unseen.

"We didn't even care what it looked like," Zavala said. "I was like, I don't know how we're going to do it, but we're gonna figure it out."

When they saw the space for the first time, Zavala and Perez realized it was large enough to include a small gallery, so they got to work. Perez built a wall to separate their studios from the gallery — which Zavala refers to as their "baby" — and together they scraped, patched and painted the place into shape.

On the first Friday of May 2021, the duo opened the doors to their irreverently dubbed Not for You Gallery with "Don't @ Me," an exhibition showcasing Perez's street-smart stencil paintings.

When asked about highlights of their first year in the gallery game, Zavala stopped to mentally rewind through the dozen shows Not for You has so far hosted.

"I think the first big, exciting show was when we had Connie Chapa in July of last year," she said. "That was a lot of fun. It was our first show that had a really big turnout. It was ungodly hot in here. But so many people were still willing to hang out — people were fighting for fans in the back. It was so ridiculous! And Connie hired Shayla Shimmy to do a burlesque performance."

"That one was a lot of fun. It was a favorite. He was very proactive about using the space to its full potential, which was something new for us. He almost sold out, [and] I love his work — it's based in fantasy and gore. ... He has a side project called The Holy Relapse, and they did a comic release here as a closing reception. They had a DJ and people were here in costumes — one girl dressed up as Coronavirus. It was amazing."

Zavala is also a big fan of Loot Achris' — aka Lauri Garcia Jones — delightfully macabre "Witches, Weirdos, Perverts and the Ridiculousness of Childhood," which opened this month and remains on view through May 21. 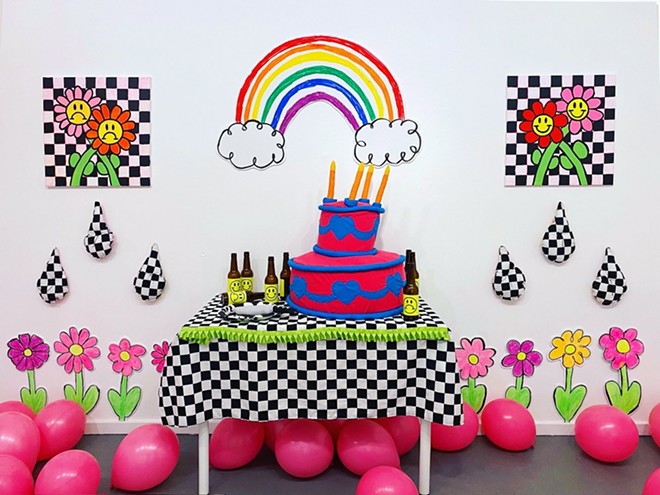 But from our perspective, Zavala's own show "Reforma" takes the cake.

Presented in December and billed as "a celebration of life and rebirth in a time of uncertainty and anxiety," the exhibition was rooted in both Zavala's pandemic-era soul searching and the stifled creativity of her youth.

Expanding on her newfound love for sewing, she created fabric sculptures based on fond childhood memories, including a birthday cake complete with candles and a knife, and a functional piñata filled with little red hearts.

"[The hearts were] kind of like a symbol of myself ... coming out to everybody," she mused.

As for the gallery's curious name?

"We like to show work that might make people uncomfortable. And it's like this whole, idea of: if you don't get it, then maybe it's not for you. I guess it's the moral of the story of the space. So, if you show up and you don't like what you see, well, then it wasn't for you. There are other places. [Some of the work] is a little on the creepy side. But it's what we love and what we want to show."

Stay on top of all things Not for You by following @notforyou_gallery on Instagram and save the dates for their upcoming exhibitions opening First Friday in July (Edward Perez), August (Tink Castillo) and September (Erik Jon Gustafson).