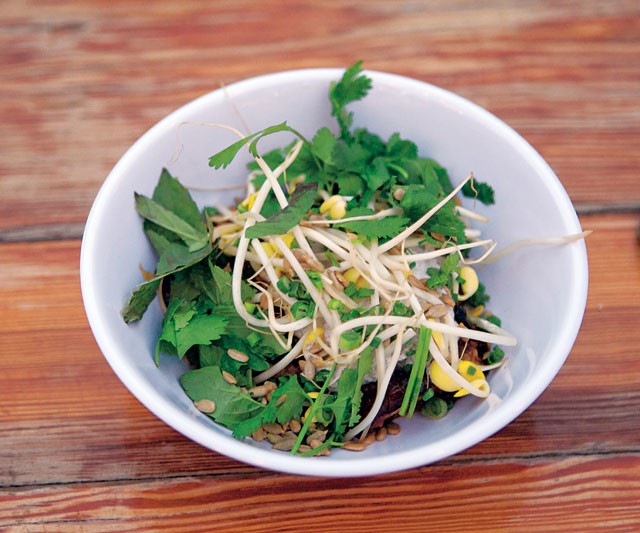 Asian restaurant names, most of which may be perfectly unremarkable in their original setting, often are the source of hilarity, or at least bemusement, when used out of context. Hung Far Low? (Google worst restaurant names, and you'll quickly see what I mean.) My assumption is that Hot Joy, the Sunday-Monday pop-up at The Monterey, was named with this in mind and tongue firmly in cheek — the fact that Hot Joy is also a gospel radio station (though not in San Antonio) only seems to confirm my suspicion.

The notion that the pernicious perpetrators, Chad Carey and chef Quealy Watson, are into words is additionally bolstered by the wine list. Get a load of this: "Donnhoff's 2010 Riesling Trocken…[shows] nips of cress adding to the invigoration of a bright, firmly textured, buoyant … and persistently penetrating performance … suffused by salinity" And I thought I was the only one who was this self-indulgent. Thing is, most of the comments are particularly perceptive, as is this: "Riesling is the perfect foil to [Hot Joy's food], and it can stand up to spice, too."

Word of advice: though the regular wine list, shared with The Monty, is fun and quirky (it nevertheless needs more wines by the glass, given the small-plate format), get with the Riesling program and order a glass even before you peruse the menu — some of which is actually as remarkable as the wines.

To get this out of the way early on (noting that the menu changes frequently), I was not a hot fan of either tofu dish I had: the soft tofu with Sichuan ginger chili sauce seemed merely bland and/or hot with no chemistry clicking between the two; the summer roll with smoked tofu was plagued by a tough wrapper and a filling that seemed dominated by kale. And Chinese broccoli with turnip and fried garlic came across as bitter, not bracing.

Now onto the hot-damn part. Crushed cucumbers didn't seem particularly pummeled, but coconut and mint marvelously mitigated the plangently pungent lime chutney. Sticky eggplant with charred onion sour cream and more was a visual train wreck, but tasted totally terrific. A bowl of pork and salt cod wonton dumplings bathed in a beatific broth pushed its flavors right to the edge, a case of masterly brinksmanship.

The twice-fried chicken wings in crab fat caramel I had to be persuaded to order — and then asked for another bowl. There's just enough crabby taste, the caramel, though magnificently messy, really rocks, and I defy you to stop. A contrastingly bright IPA from the extensive beer list might work here.

Just below that Donnhoff Riesling (a wine I fell totally in love with) on the Riesling manifesto lies the 2011 Willi Schaefer Graacher Himmelreich Riesling Kabinett — and this is not even a complicated name in the realm of German wines. "This particular wine is, of course, crazy good, and has peach pie, glazed citrus flavors, crushed stones … only problem is you won't wanna stop drinking it…" Agreed to a point; it was crazy good with one of the night's specials, a red Thai curry with crisp pork belly, potatoes and multiple herbs (plus bean sprouts and a slab of ginger) over white rice. I could have used a touch more spice in the dish, and didn't find the wine as compelling as Carey did on its own (it did have peach flavors, but at the risk of sounding like a prissy wine dork, I'd say it was more flaky turnover than pie). But it was spunky with what spice there was. Seriously, spectacularly, spunky.