Cinema by Subscription: Stream These Movies with San Antonio Ties While You’re Staying Safe at Home How many of you are missing your dose of Selena right now? After all, the movie, partially shot in San Antonio, is screened somewhere in the city at least monthly. Maybe the quarantine is making you feel a little Bidi Bidi Bum Bummed.

You can, of course, rent Selena online any time you want. But, if you’re already subscribed to some top streaming services, it’s not necessary to pay extra to see films with San Antonio ties. Although the list below isn’t exhaustive, here are a few movies linked back to the Alamo City that you can watch right now, assuming your subscription game is on point.

In the 2018 drama Rich Kids, a group of underprivileged teenagers break into the home of a wealthy family to feel what it’s like to live on the opposite end of the income bracket. The film stars two San Antonio natives, Amelia Rico and Alessandra Mañon.

Rico, a 2000 graduate of Brackenridge High School, plays the mother of one of the central characters who breaks into the house. In the opening scene, her family is evicted from their own home for missing multiple rent payments. She lashes out at her husband for his failure to provide for them.

“We all know that Latino representation is needed in Hollywood,” Rico told the Current during an interview last month. “The film really gets into the heart and human story of these kids and what drives them, rather than just focusing on the negativity of their actions.”

Mañon, a 2009 graduate of Incarnate Word High School, stars as Jasmin, one of the teens who spends an entire afternoon swimming in the rich family’s pool, wearing their clothes and drinking their alcohol. Her character “establishes her power through her sexuality,” Mañon explains.

“It makes sense that she has a little bit of this wild streak, because she uses it as a mask to feel like she is in control of her life,” the actress told the Current. “The film changes the idea of the sexy Latina stereotype, because it shows who she really is as a person.” 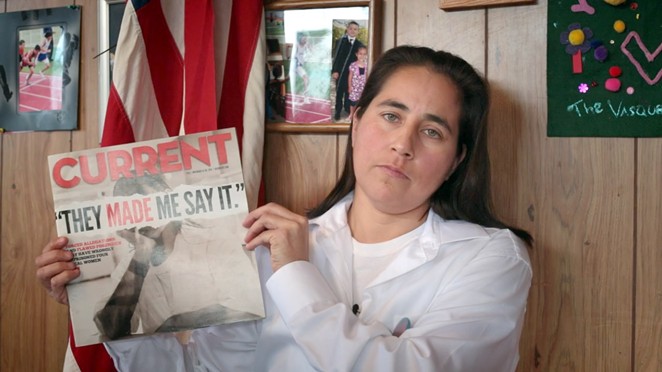 If you’re into documentary crime dramas, Amazon Prime has 2016’s Southwest of Salem, the true story of four Latinas from San Antonio — Elizabeth Ramirez, Kristie Mayhugh, Cassandra Rivera and Anna Vasquez — who were wrongly convicted of sexually assaulting two young girls in 1994. After serving 15 years in prison, the women were finally exonerated, and their records expunged.

“Their case is not just about the San Antonio Four, it’s about gay rights,” director Deborah S. Esquenazi told the Current in 2016. “It’s about women’s rights. It’s about Latino rights. Their case represents something so much bigger.”

If you were like everyone else and watched Netflix’s documentary Tiger King, the stranger-than-fiction San Antonio story The Imposter from 2012 is much better.

Another documentary you need to see is filmmaker and San Antonio native Duane Graves’ 2000 film Up Syndrome, a touching portrait he made about his childhood friend Rene Moreno who was born with Down syndrome.

The 1994 comedy caper Blank Check was shot in San Antonio. You’ll recognize locations including Fiesta Texas and the River Walk. The story follows a 12-year-old boy who cashes a check for $1 million from a criminal who wants the money back.

Director and San Antonio native Stephen Herek is getting a lot of love at Disney+. Four of his movies from the 1990s are streaming there: The Mighty Ducks, The Three Musketeers, Mr. Holland’s Opus and the live-action version of 101 Dalmatians.

Plus, animator, voice actor and San Antonio native Paul Briggs lends his voice to Yama, an underground bot fighter, in Big Hero 6; Two Fingers, a frog hunter, in The Princess and the Frog; and Marshmallow, a snow monster in Frozen and Frozen II.