‘The Fifth Estate’ is Weak on WikiLeaks 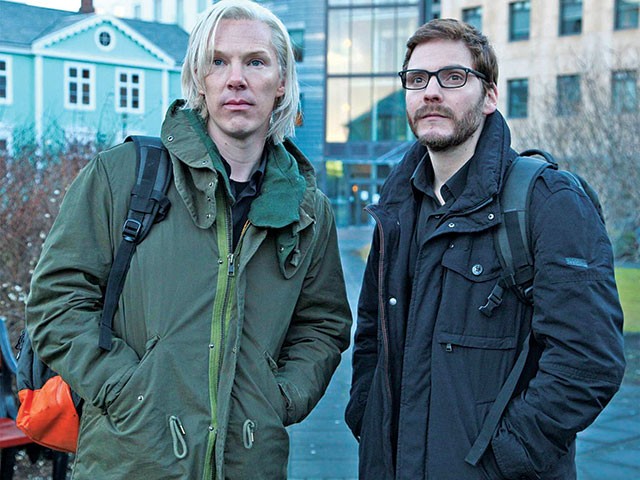 In an attempt to make the online world of WikiLeaks more cinematic, director Bill Condon (Dreamgirls, Twilight: Breaking Dawn I and II) marshals a variety of CGI gimmicks to jazz up a story that mistakes the message delivery system for the message itself. Unfortunately, no matter how elaborately he tricks out the shot, watching Hollywood actors type on computer keyboards just isn’t all that dramatic—even if they’re typing really, really hard and really, really fast.

Instead of trying to explore the ongoing debate over privacy, transparency and security through the story of one man, this watchable but awkward mix of popcorn cyber thriller, political soapbox and personal drama can’t decide what kind of story it wants to tell. Worse, it picks the wrong character to tell it. Instead of focusing on the guy we’re really interested in—Julian Assange (Benedict Cumberbatch)—Condon and screenwriter Josh Singer level their crosshairs on the guy next to the guy. That would be bland but idealistic Daniel Domscheit-Berg (Daniel Brühl). Conveniently, Domscheit-Berg also wrote the book the movie draws some of its material from.

Cutting back and forth through time, The Fifth Estate covers the underdog formation of WikilLeaks to Assange’s reckless indifference to ethics to Berg’s personal struggles and nagging doubts, and the narrative leaves no expositional cliché unturned. It all comes to a head in 2010, when soldier Bradley Manning provides WikiLeaks with thousands of classified American intelligence documents. But what should fuel a dramatic and ethical debate about the value and impacts of whistleblowers instead becomes a petty tale of personal betrayal and, ultimately, rivalry.

It’s difficult to explore complex issues and even more complicated players in a two-hour dramatic movie, but you get the sense that Condon and company aren’t even trying. Luckily, Condon has Cumberbatch to storm through his film, demonstrating what makes Assange such a contradictory and charismatic figure. While his mission—government and corporate accountability and transparency—is undeniably noble, he is far less than a saint. Cumberbatch gives a master class in line delivery and character impression, but the movie doesn’t return the favor with a compelling backstory or character development.

At one point in the film Domscheit-Berg asks: “How can someone talk for 15 minutes without saying anything?” The same could be said for The Fifth Estate. With a two hour-plus running time, it never makes the case that it has any valuable information to provide.