Legendary trumpeter and music mogul Herb Alpert and his wife Lani Hall will perform at the Tobin Center this week, but that's not the only reason for music fans to be excited. 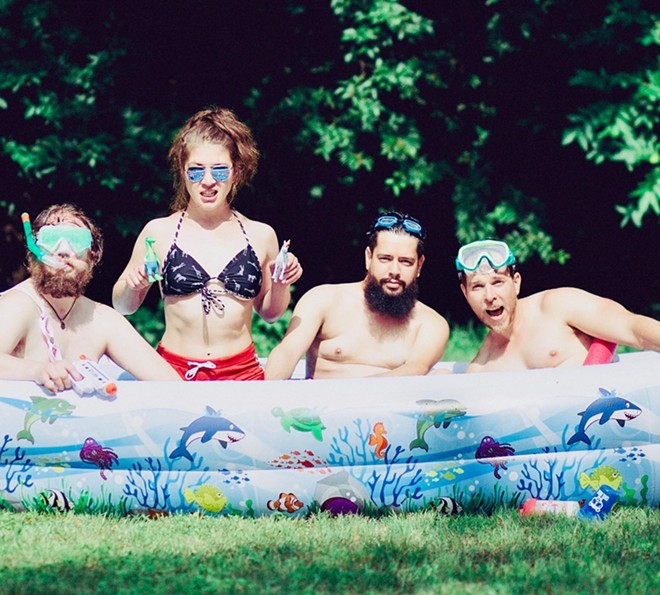 Courtesy Photo / Hen and the Cocks
Denton outfit Hen and the Cocks play Vibes Underground on Friday.
Legendary trumpeter and music mogul Herb Alpert and his wife Lani Hall will perform at the Tobin Center this week, which is reason enough for SA music fans to be excited.

But if reliving the Tijuana Brass days isn't your idea of a good time, good thing there's plenty more to check out. This week's options range from surf-meets-dream pop band Los Shadows to long-running Spanish pop act Hombres G to Hen and the Cocks, a noisy quartet whose name alone commands plenty of post-punk cred.

Octogenarian trumpeter Herb Alpert's impact on music is almost beyond measure. His career touches multiple genres including songwriting credits for Sam Cooke's "Wonderful World," forming and leading the Tijuana Brass during the '60s and a solo career that produced the Grammy award-winning instrumental "Rise" in 1979, which was subsequently sampled by The Notorious B.I.G. for the 1997 rap megahit "Hypnotize." Alpert's imprint on music was cemented when he was awarded the 2012 National Medal of Arts by President Barack Obama. Alpert added another Grammy in 2014 for Steppin' Out. These days he's collaborating with his wife Lani Hall, a legend in her own right as the original lead singer of Sergio Mendes and Brasil '66. $39.50-$75, 7:30 p.m., Tobin Center for the Performing Arts, 100 Auditorium Circle, (210) 223-8624, tobincenter.org. — Danny Cervantes

Ever wondered, "Has anyone ever thought of combining surf and dream pop?" Well, then, you're in for a treat. Los Shadows' music features a production quality associated with the dreamier side, although with a surfy sheen. The overall effect isn't dissimilar to a modern Roy Orbison. The band is calling this tour Down The Rabbit Hole. Now, if only they'd played this venue back when it was the White Rabbit. Ha. We kid. $15, 7 p.m., Paper Tiger, 2410 N. St. Mary's St., papertigersatx.com. — Mike McMahan

Hen and the Cocks

With a name like Hen and the Cocks, you know this band is looking to ruffle some feathers. And the Denton outfit's politically charged brand of post-punk seems calculated to do just that. Loud, thudding herky-jerky music is their specialty. Just be wary of the search results if you're looking to check it out on YouTube. $10, 6 p.m., Vibes Underground, 1223 E. Houston St., (210) 255-3833, facebook.com/vibesunderground. — Brianna Espinoza

The self-described borrachos in this act are singer-songwriters Kevin Fowler and Roger Creager, who bring along their celebration of beer and the perfunctory use of Spanish for a South Texas vibe. Fowler hails from Amarillo and Creager from Corpus Christi, and their pairing comes across like a less-refined version of Jimmy Buffett. Fowler's musical evolution has taken him a long way from playing with metal band Dangerous Toys in the '90s. Grab your amigos, expect lots of gringos and be ready to get loco out there. $30-$35, 8 p.m., John T. Floore's Country Store, 14492 Old Bandera Road, (210) 695-8827, liveatfloores.com. — DC

Straight out of New Braunfels, Creed Fisher has developed a following for his flag-waving, working-class outlaw country. Song titles such as "If You Have a Right to Burn My Flag (Then I Have a Right to Kick Your Ass)," "Don't California My Texas" and "The Good Ol' U.S. of A." speak for themselves. His most recent album, 2021's Whiskey and the Dog is described as "unapologetic, patriotic and passionate." $15-$20, 9 p.m., Sam's Burger Joint, 330 E. Grayson St., (210) 223-2830, samsburgerjoint.com. — DC