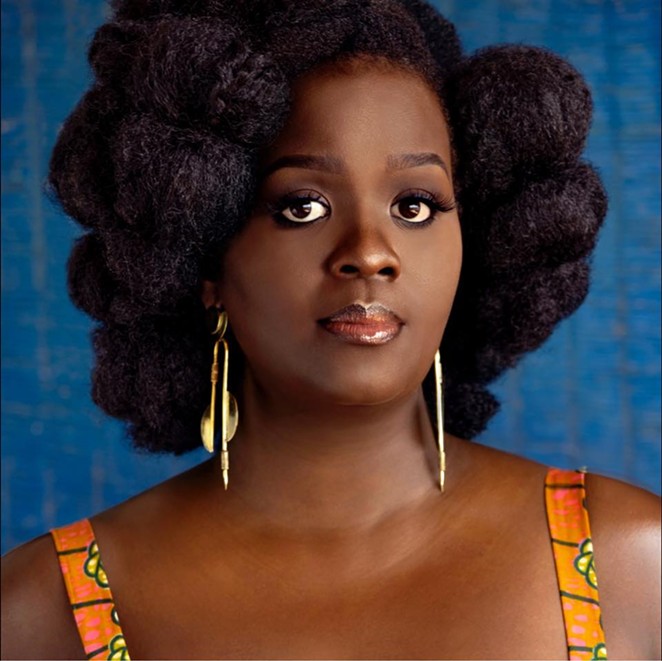 Facebook / Somi
Grammy-nominated Somi will perform at the Jo Long Theatre Saturday.
San Antonio music fans have got plenty of options this week if they're looking to dance off turkey-and-stuffing pounds.

Nitzer Ebb
Nitzer Ebb brought visceral, aggressive synth pop to the working class UK town of Essex in the ’80s. Three decades later, the band is coming to another blue-collar town, San Antonio, to deliver its brand of electronic rock, which often revels in the seedier side of life. According to an interview in the The Guardian, the band has no interest in taming the sexual energy of its music, even though its members are now in their 60s. $35-$50, 9 p.m., Sam’s Burger Joint, 330 E. Grayson St., (210) 223-2830, samsburgerjoint.com. — Enrique Bonilla

Balcones Heights Jazz Festival Christmas Concert
Headliner Slim Man, a bassist who also happens to be a singer-songwriter, will bring his mix of soul and pop to this free festival of Holiday cheer. For those keeping score at home, this will be the performer’s 13th appearance at the annual event. This year’s engagement also marks a return to an in-person show, since last year’s was held online due to COVID-19. San Antonio crooner Ken Slavin will open the show. Free, 7:30 p.m., Wonderland of the Americas Amphitheater, 4522 Fredericksburg Road, (210) 785-3500, wonderlandamericas.com. — Mike McMahan

Sammy Hagar and The Circle
Presumably driving more than 55 mph on his current tour, the Red Rocker is making a return to San Antonio, a city with whom he has a long history. Hagar’s band, The Circle, which includes former Van Halen bassist Michael Anthony, recently completed a Las Vegas residency that included a heavy helping of Van Hagar tunes, solo hits and covers including Led Zep’s “Rock and Roll.” Expect a similar show here. Shoutouts to tequila are also a safe bet. $49.50-$99.50, 8 p.m., Aztec Theatre, 104 N. St. Mary’s St., theaztectheatre.com. — MM