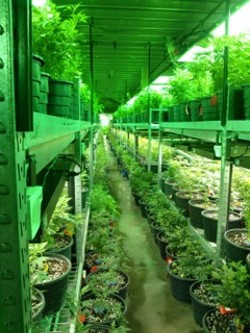 Heather Fazio, Marijuana Policy Project
Marijuana Policy Project Texas Political Director Heather Fazio visited Colorado and Washington earlier this year on a fact-finding mission concerning legal pot. This photo was taken at a Colorado-based marijuana dispensary.
With the next legislative session rapidly approaching, we thought we'd take a look at whether any marijuana bills were going to be introduced.

But legalese is hard, so we contacted Marijuana Policy Project Texas Political Director Heather Fazio to help us wade through the jargon in an attempt to gain a clear understanding of what Mr. Dutton is trying to accomplish.

Fazio, who briefly looked at a copy of the bill (H.B. 414) said it would classify a conviction for possession of one ounce or less of marijuana to a Class C Misdemeanor instead of a Class B, but if a person is convicted three times it would be bumped back to a Class B Misdemeanor.

And while the bill would allow for cite-and-release, a suspect may also be arrested. If convicted, the fine would be 500 smackers.

But there's downsides to the bill, Fazio said, explaining that arrest is traumatizing and may result in negative consequences regarding family and employment. She also thinks the $500 fine is excessive. Then there's the criminal record that comes with a conviction, which for a small-time pot charge, results in unnecessary harm to education, employment and housing.

"We are proposing an alternative. Our bill will make the possession of 1 oz. or less a civil penalty, removing the opportunity for arrest, jail time, and criminal record. The fine would cap at $100," Fazio said, adding the El Paso Representative Joe Moody, a former prosecutor who serves on the House Criminal Jurisprudence Committee, would introduce the bill in approximately two weeks.

According to the Texas Chapter of the National Organization for Reform of Marijuana Laws (NORML) 2014 Voter's Guide, Moody was one of six House Criminal Jurisprudence Committee members to vote to lower penalties.

Here's a breakdown of the bill provided to the Current:

• Possession of an ounce or less of marijuana would remain illegal, but the penalty would be reduced. The penalties for possessing more than an ounce of marijuana, for sales and for cultivation would not be affected.

• Offenders would be punished with a civil fine of up to $100.

• Individuals would not be arrested or jailed for possession of a small amount of marijuana.

• The offense would not generate a criminal record, which can follow a person for life and jeopardize employment prospects, housing, and educational opportunities.

• The bill would not “legalize” marijuana, it would simply change the penalty.

In 2014, the Marijuana Policy Project announced it was kicking off multi-year legislative campaign in Texas. The group has been active on a national level since 1995.

According to Opensecrets.org, it's the largest national organization working toward reforming marijuana policy and has contributed $288,000 to campaigns since 1995, along with spending more than $1 million in lobbying since 2002.

Texas' Legislature will convene for its 84th session in January.

Here's a draft of Dutton's bill: