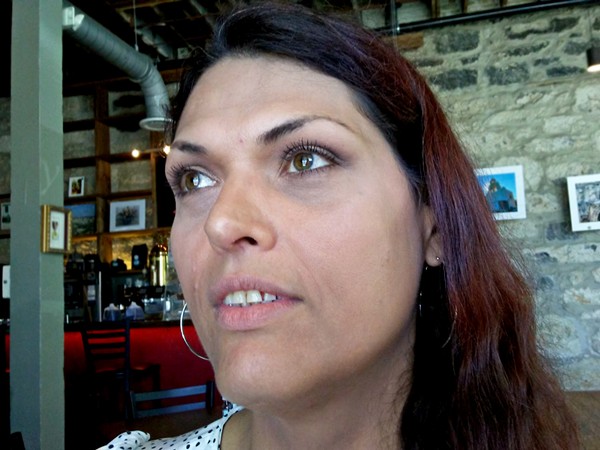 Sofia Sepulveda remembers the day Mexican presidential candidate Luis Donaldo Colosio was assassinated at a campaign rally in 1994. The PRI politician’s hopeful speeches promoting Mexico’s economic reformation inspired a 17-year-old Sepulveda to get involved. Colosio’s words planted a seed that would flourish in 2010 after she heard Vermont Sen. Bernie Sanders speak on MSNBC. Under the influence of both politicians, she decided to invest her time in local political activism.

It’s a few minutes past 10:00 a.m. when I spot Sepulveda, now 41, sitting by the front steps of City Hall. Her back is to me. With one hand, she gracefully cups her long, brown hair behind her neck and pulls it down over her shoulder, Selena-style. Though the statuesque beauty would tower over a sea of prime-time telenovela ingénues, she’d certainly blend in. When I extend my hand to greet her, she vetoes the gesture. “I hug,” she says with a surprisingly thick Mexican accent.

From the day she was born, her relationship status with the United States could best be described as “it’s complicated.” She was born in Laredo but raised across the border in Nuevo Laredo. Her parents, both Mexican citizens, hoped that by having their children on U.S. soil, it would provide better opportunities for them in the future. It certainly added to Sepulveda’s unique story. When she got her first job after high school, her father would tease her about being “the only American working illegally in Mexico.”

Did you pass as a girl? I ask.

To help pay the bills, Sepulveda’s mother, a strict Catholic, sold Avon beauty products door-to-door. One day, when she was in her early teens, Sepulveda got busted putting on makeup from the forbidden Avon stash. “Do you want to be one of those freaks?” her mother scolded. Her dad, who was quietly more accepting, would buy her “girly dresses” for Halloween instead of the humdrum “Superman costume. I wanted to be Wonder Woman,” she recalls.

As she block-walks for progressive candidates as one of the city’s more visible activists, she feels a family connection. “Every time I knock on a door, I feel like I’m with [my mother] in spirit.”

As we sit down at Fratello’s Centro Citta Italian Restaurant, she recounts how her father quit his job to care for his ailing wife, but that her mother passed away in 1992. “We did a lot of praying when my mom was sick,” she rues. “Nothing happened.” Sepulveda, who’s now an atheist, says that when her mother died, her family went from being an upper middle-class family to struggling to make ends meet.

After moving to San Antonio, she attended a Sunday night show at The Saint and witnessed a performance by the late Erika Andrews. “That was the first time I saw what transgender was,” she recalls.

A friend took her to see a doctor and she soon began hormone treatments. The friend lived at the Spanish Key Apartments, which Sepulveda remembers as a safe haven with “nothing but trans girls.” When it came time for her to perform, as she believed was expected of trans women, she realized something. “I feel that I’m a bad dancer for being Latina,” she says laughingly. Her James Avery bracelet jingles as she brushes her hair back. “It just wasn’t my cup of tea.”

She says her experience isn’t “just as a transgender woman, it’s as a human person.” So, she traded The Saint for Sanders.

“Money, health care... everything he was talking about, I was feeling!” she says. She told her then-boyfriend that she’d campaign for Sanders if he decided to run in the 2016 presidential election. Her boyfriend replied, “Who’s gonna vote for an old, angry, white Jew?”

She replays the scene enthusiastically. “I said, ‘I will!’ Bernie basically made Burlington, Vermont, a mecca for trans people,” she told him.

Although she admits that her accent can get in the way of her message when she gets “angry or frustrated” and “all the words get smashed together,” she’s crystal clear that she will not be endorsing Gina Ortiz Jones, the Democratic nominee for Texas’ 23th Congressional District race. “She’s a lesbian. She’s a woman,” she says. “But she has nothing else to offer.”

She also believes that some voters assume that Sanders’ revolution and its activists are part of the Democratic Party. “We are not,” she says firmly. “We’re trying to change it.”

Her activism for health care for all is unwavering.

About six years ago, Sepulveda “got a scratch” while visiting Mexico. When she returned home, she was diagnosed with MRSA. She didn’t have insurance, and it was before the Affordable Care Act. After she was treated and began recovering, she received a medical bill for $15,000. Not knowing how she would pay it, she came to the conclusion that she probably wasn’t the only person with this problem.

She started showing up at rallies and left-leaning political meetings, and studying the economic side of the debates. After a while, she started to form an opinion about the Democratic Party. It seemed to her that Democrats were just as guilty of not effectively representing the working class as Republicans. She thought, “When did we become that abused woman [the working class] that we are ok that our husband [the Democrats] is an ass? They give us platitudes but they don’t give us solutions.”

She criticizes former President Barack Obama for being too “polite and poised,” and for not fully supporting marriage equality from the start. “He didn’t want to be the angry black man that everyone’s afraid of,” she says. “There’s nothing wrong with being an angry black man or an angry brown woman after what they’ve done to us. It’s not like we don’t have a reason to be angry.”

Are you an angry brown woman? I ask.

With a gentle smile, she nods her head.

“I am an angry brown woman.”

Dressed in a flattering, pink power suit, Councilwoman Shirley Gonzales and her staff begin to set up tables right next to us for what seems to be a large lunch meeting, signaling the end of my time with Sepulveda, who’s off to a Paid Sick Time rally.

I never asked you about President Trump, I suddenly remember.

She shakes her head.

“He’s not worth mentioning.”