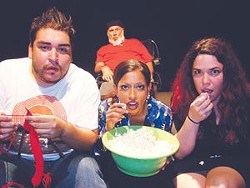 
This is a test. For four hours on Saturday, JSTV Channel 26 will conduct a test of the performance art network of San Antonio, Texas. Do not be alarmed as the programming shifts from G-rated to R-rated content as the test progresses. At any point during the test, feel free to leave your seat to use the facilities, order a cocktail, or chat with reps of Aztec Gold TV ? who will be “roaming the crowd with live updates, both real and imagined.” Hosted by Manuel “Cros” Esquivel, Dino Foxx, Annele Spector, and Kitty Williams, Jump-Start Performance Co.’s 26th anniversary extravaganza is a virtually televised Who’s Who (and what’s that?) of SA’s performing arts scene. Theater, burlesque, drag, music, dance, and fire eating are but a few of the feats to be performed by company members and community artists such as Guadalupe Dance Co., Alamotion, Dragonfly, Nicolas Valdez, Joel Settles, Noir Vamp, Melissa Marlowe, Erik Bosse, SkudR Jones, S.T. Shimi, the Push Pens, Azul, Janie Sauceda, and Hyperbubble. $10 suggested donation (as always, pay what you can), doors open at 6:30pm, performances start at 7pm, Sterling Houston Theater at Jump-Start, 108 Blue Star, (210) 227-5867, jump-start.org.