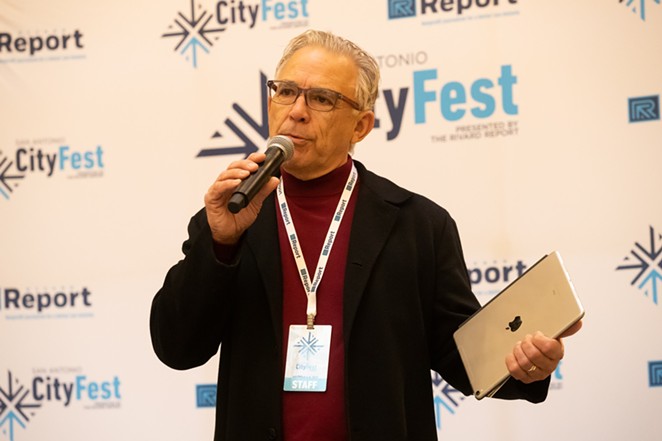 Facebook / San Antonio Report
Rivard Report Publisher and Editor Bob Rivard speaks at a public event. Apparently, even as he scales back his management role, he'll continue to utilize his gift of gab.
Nine-year-old nonprofit news site the Rivard Report has changed its name as its founder — former San Antonio Express-News editor-in-chief Bob Rivard — prepares to scale back his management role.

In a statement released Monday, the site announced its rebranding as the San Antonio Report, saying the new name reflects its evolution "into a thriving online news enterprise with a team of talented journalists and nonprofit partners."

The Rivard-less moniker also lays groundwork for the organization to search for new a publisher/CEO as part of a "long-planned succession process," according to its statement. Rivard, who co-founded the site with wife Monika Maeckle, currently serves as both editor and publisher.

After the San Antonio Report lands a new publisher, it will launch an editor search, likely next year. With that position secure, Rivard will remain as a board member, according to the statement. He'll also continue to moderate public events and write a weekly column.

The name change comes after an earlier rebranding effort failed to take hold.

In September 2017, the Rivard Report announced plans to pick a new name reflective of its growth from a personal blog into a community news site. However, the organization reversed course nearly a year later, saying a branding consultant advised that its existing name and brand equity weren't "worth sacrificing for a more institutional name."

A later version of the release corrected the error.