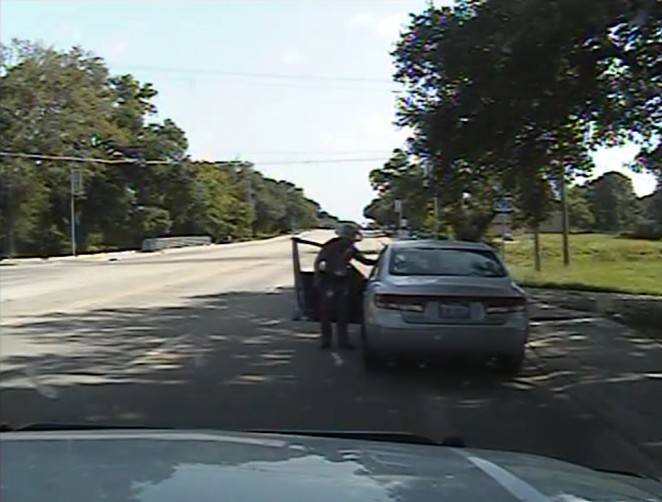 Texas Department of Public Safety
After Sandra Bland stood up for her rights, this DPS officer threatened her with a Taser.
Video of Sandra Bland's arrest shows Texas Public Department of Safety Officer Brian Encinia threatening the 28-year-old woman from the Chicago area with a Taser after she refused to put out a cigarette.

That was July 10. Three days later, Bland was found dead in Waller County's jail. Initially, law enforcement officials said she committed suicide — by hanging — but walked back that assertion, classifying the case as a murder investigation.

As tension between Encinia and Bland escalated, Encinia tells the woman that if she doesn't get out of the car, he's going to "light her up."

The encounter moves off screen and Encinia alleges that Bland kicked him, so he charged her with assault on a public servant. But, after watching, you have to wonder if he arrested her for refusing to put out a cigarette and for asserting her Fourth and Fifth Amendment rights, which are guaranteed to Americans by the Constitution.

Here's a breakdown from the International Business Times:

These two sets of laws prohibit unwarranted searches of personal property in many circumstances and grant a person the right to remain silent before or after an arrest.

The Fifth Amendment protects from self-incrimination and the person in question must clearly state that they are exercising this right. The driver’s only obligation is to identify his or her self to law enforcement and can refuse to answer any additional questions.


However, a good practice when pulled over by an aggressive officer is to remain calm, compliant and to complain later.

The veracity of the dashcam footage has been called into question. DPS has described strange continuities in the video as a glitch and told Time magazine that a more accurate video will be released.