Texas House May Take Up Restrictive Abortion Insurance Bill After All 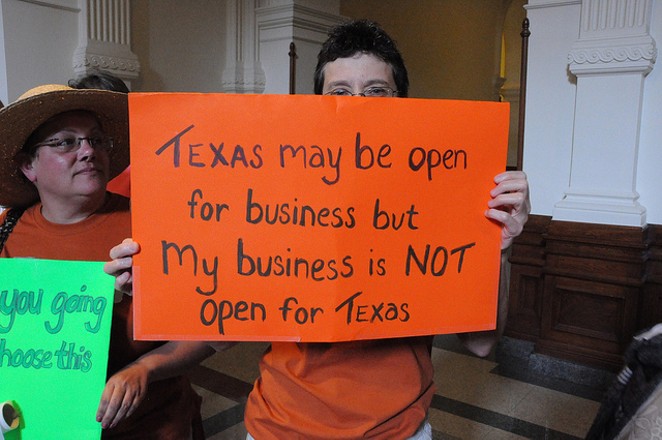 Via Flickr user Ann Harkness
A protestor rallies against abortion restrictions during the previous Legislative session.


The state House will likely consider a bill today that would further restrict access to abortions in Texas.

The bill passed through the Senate on May 6. But it appeared to be dead in the lower chamber after the Calendars Committee, which controls which bills reach the House floor, voted against taking it up.

That incensed Rep. Jonathan Stickland, R-Bedford, who thought he had worked out a deal for the bill to get a vote. In exchange for a vote on SB 575, Strickland dropped an amendment that would any ban abortion after 20 weeks, even in case of a fetal abnormality.

Once the Calendars Committee shot the bill down, Stickland nearly came to blows with Corsicana Republican Byron Cook, with whom he had made the deal. Stickland and Cook had to be separated by security.

Cook said Stickland later apologized to him for the incident, according to the Houston Chronicle.

Stickland, a tea party water carrier and Kung Fu Panda lookalike, has had his antics well-documented this session. And he's a staunch abortion opponent. Stickland was one of the lawmakers who hung “FORMER FETUS” plaques next to their offices in the Capitol.

After the House recessed on Sunday night though, eight members of the Calendars Committee reconvened and voted on the abortion bill again, according to The Texas Tribune. This time it passed, 8-0. No Democrats were present for the vote, nor were two of the Republicans who initially voted against it.

Rep. Debbie Riddle, R-Tomball, initially voted against the bill, but changed her mind on the second vote.