'I support law enforcement 100%, but under no circumstances should they have allowed what happened that day,' Gutierrez said. 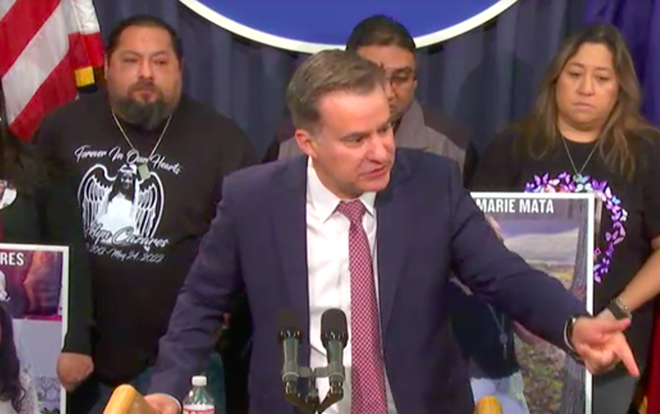 During a press conference held on the shooting's eight-month anniversary, the San Antonio Democrat introduced bills to demand more accountability for law enforcement officials, the state and gun manufacturers. He discussed the proposals while surrounded by the families of victims from the Robb shooting and 2018's mass shooting at Santa Fe High School.

Gutierrez's new bills would set up a state compensation fund for school shooting victims and strike down qualified immunity for police officers, a legal principle that prevents them from facing civil suits. The measures also would let families affected by school shootings sue state agencies for negligence and demand that federal lawmakers permit civil lawsuits against firearms manufacturers.

The Uvalde shooting unleashed a national debate on gun safety after the 18-year-old perpetrator purchased a pair of assault rifles just after his birthday and unleashed mayhem on the school.

Texas law enforcement agencies are also under scrutiny over their handling of the incident. The Justice Department is investigating why the 376 armed police who swarmed the school took 77 minutes to finally enter a classroom and take out the shooter.

“I support law enforcement 100%, but under no circumstances should they have allowed what happened that day,” Gutierrez said. “They failed these children for 77 minutes for a lack of leadership — under no circumstances should they be allowed to walk away and not compensate people. There’s no amount of money that’s going to bring back their children. But there should be justice, so today’s about justice.”

Gutierrez has already filed other proposals aimed at curbing school shootings, including one that would raise the minimum age for purchasing an assault rifle from 18 to 21. He said he expects to file around 20 bills this session. He also pledged to hold more news conferences updating the progress on the legislation.

During the press conference, some Uvalde family members shared tearful memories of their loved ones and urged the Republican-controlled Texas Legislature to act to prevent future shootings.

Marissa Lozano, whose sister Irma Garcia was one of the teachers slain that day, said Texas' lax gun laws and poor police oversight played key rules in the tragedy.