The STAAR Test Is So Bad, Lawmaker Wants to Use Exams From Other States 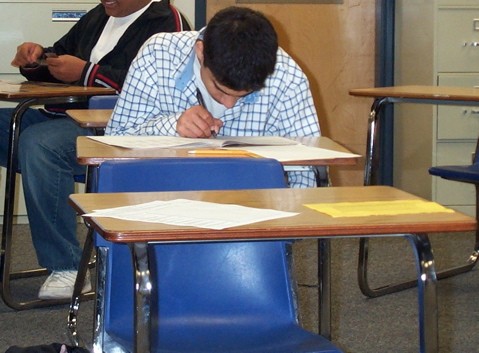 Wikimedia
Texas' state-mandated standardized tests are so bad that one lawmaker has suggested using exams from other states.

Jason Isaac, a Republican from Dripping Springs, says school districts should have the freedom to choose from a variety of national standardized tests instead of using the troubled State of Texas Assessments of Academic Readiness, or STAAR test. "The litany of errors being uncovered about STAAR is simply a disservice to our students, hard-working teachers, and families," he said in a prepared statement. "To that end, I propose that schools be given the freedom to choose from a variety of nationally normed standardized tests, not have their hands tied while the State of Texas tries to iron out STAAR's many kinks."

Isaac says he plans to file legislation in 2016 that would allow districts to choose from standardized tests from around the country that conform with Texas Essential Knowledge and Skills, which are state standards for what students should know in different subject areas. Isaac unsuccessfully tried this in 2013 and tells Austin television station KXAN that he plans to refile that proposal next year.

Since the STAAR was last administered to third through eighth grade students in May, testing materials have been lost and student results have actually been erased. In fact, problems are so widespread that, last week, the Texas Education Agency fined Educational Testing Services, a New Jersey company responsible for statewide delivery and administration of the test, $20.7 million. The company is also required to invest $15 million of its own cash into what TEA Education Commissioner Mike Morath politely calls "areas of concern," including online testing enrollment, shipping, online testing, and scoring and reporting.

The test also failed to hold up to a new state law, which Isaac helped author, that requires 85 percent of students to complete the exams within two to three hours, depending on the grade. That prompted a lawsuit filed by parents of third, fifth and eighth grade students from Houston, Wimberley, Austin and Orangefield that is asking a state judge to throw out the spring assessment results, as the Texas Tribune recently reported.