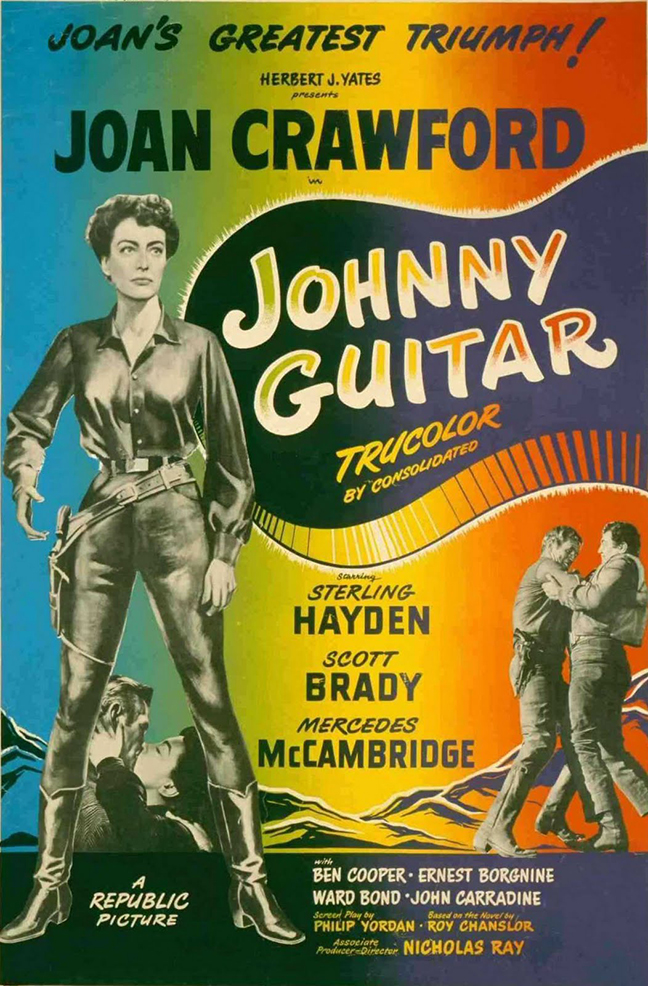 Considered influential by French New Wave directors, this 1954 Western stars San Antonio-born Oscar winner Joan Crawford as Vienna, a tough-as-nails saloon owner whose support of a new railroad doesn’t make her popular with the local cattle folk. When her former lover Johnny Guitar (Sterling Hayden) rolls in, Team Vienna must face off against a posse led by rancher Emma Small (Mercedes McCambridge). Selected in 2008 by the Library of Congress for preservation in the National Film Registry, Johnny Guitar is often mentioned when the conversation turns to queer cinema, especially since Crawford and McCambridge’s unconventional roles (not to mention their wardrobes) were a rarity for women in Westerns. There’s plenty to debate when it comes to the characters’ sexual identities, but what can’t be argued is the film’s misleading title, since Johnny Guitar really is more of a two-woman showdown. Free, 6:30pm, McNay Art Museum, 6000 N New Braunfels, (210) 824-5368, mcnayart.org. —Kiko Martinez 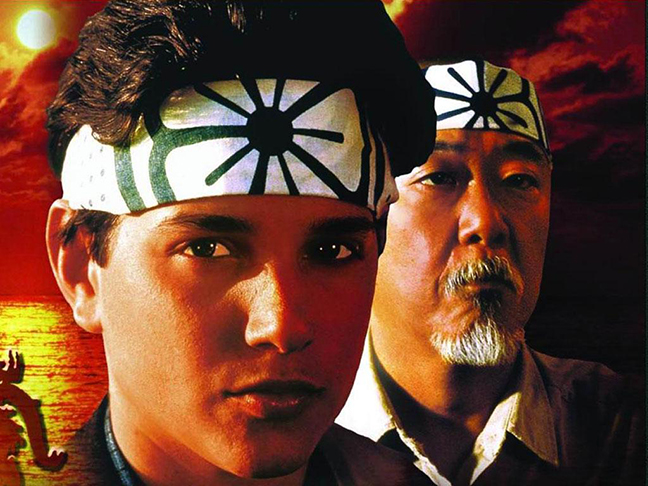 The very Wu-Tang-sounding Third Chamber Thursdays is a very Wu-Tang kinda thing—a regular event pairing a martial-arts movie screening with a live hip-hop concert. This week, local artist BeatMaker Will warms up the crowd for The Karate Kid, Part II, the 1986 entry in the franchise responsible for 3 Ninjas, Mighty Morphin' Power Rangers: The Movie and that time you crane-kicked your aunt’s cat. KK2 changes the setting to Okinawa where Ralph Macchio becomes one of the great American action heroes (a la Uma Thurman, Tom Cruise and the dude from The Fast and the Furious: Tokyo Drift) to travel to Japan to learn, then ultimately school the Japanese in something they invented. This time around, there’s no waxing off, just the less-hilarious “drum technique,” so the first 50 ticketholders will receive their own monkey drums to play along to the film’s big fight scene. $12, 7:30pm (45 minutes of hip-hop videos precede the film), Alamo Drafthouse Park North, 618 NW Loop 410, (210) 677-8500, facebook.com/thirdchamberthursdays. —Jeremy Martin

Roots in the Shadows of San Antonio CD Release 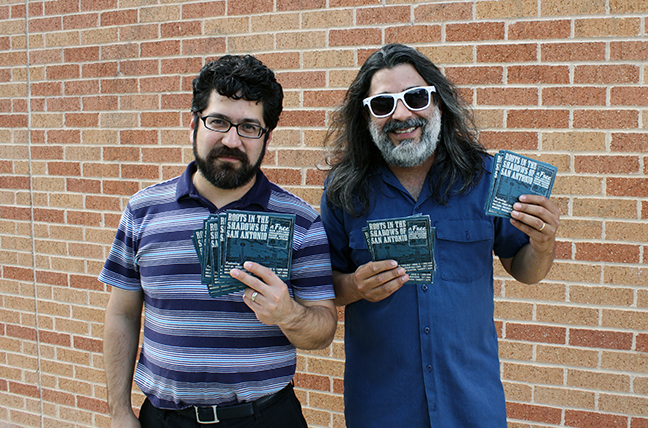 Spearheaded by multi-instrumentalist Phillip Luna (of the bands The Please Help and Fear Snakeface and the production company Even I Have Seizures) and Jason Trevino (of the imprint ROHI Records and most-current band the Rosedale Highs), Roots in the Shadows of San Antonio combines the talents of 13 diverse bands on a compilation CD designed to showcase the underground music scene of central Texas. An outgrowth of a 2013 music series that popped up at unique locations around town (including the Hays Street Bridge, Imagine Books and Records, artist Cruz Ortiz’s studio and beyond), the project encompasses retro surf (King Pelican), ungovernable Americana (Garrett T. Caps), lo-fi indie rock (Snowbyrd), breakup pop (Whiskey Ships), punk (Puppy Jet), ambient folk (Nat’l Parks) and genres in between. Sala Diaz hosts the album release and listening party, complete with free CDs and beer from Karbach Brewing Co. Free, 6-10pm, Sala Diaz, 517 Stieren, rootsintheshadows.com. —Bryan Rindfuss 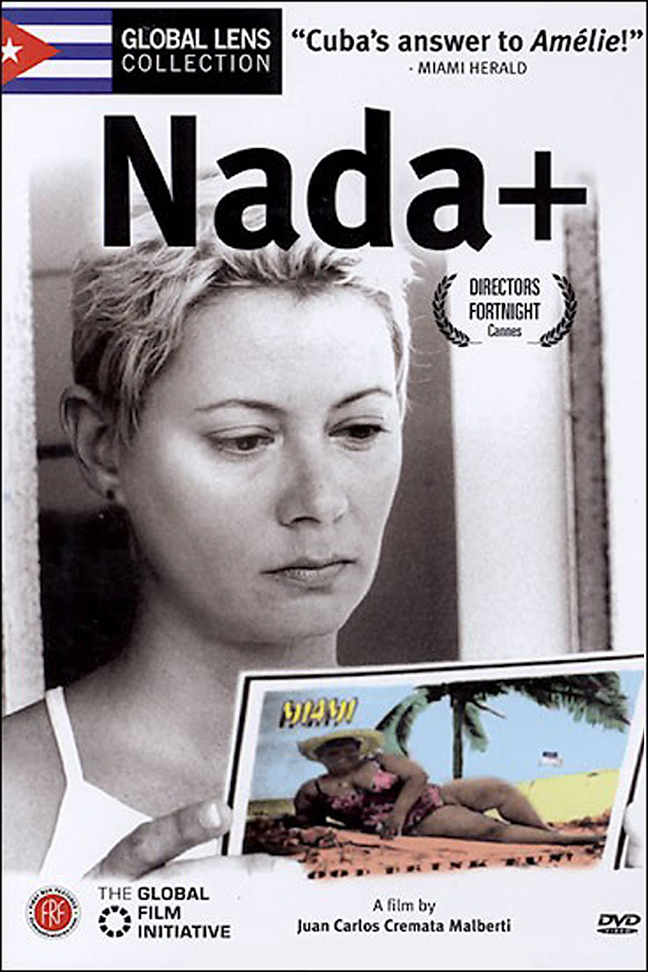 Co-presented by the Global Film Initiative as part of the Global Lens series, Cuban director Juan Carlos Cremata Malberti’s romantic comedy Nothing More (Nada+) features actress Thais Valdés playing Carla Pérez, a postal worker living in Havana who passes time by replying to the letters she is supposed to be processing. When an opportunity to move to Miami with her parents arises, Carla must decide whether a new life in America will make her truly happy. Described by the Miami Herald as “Cuba’s answer to [France’s] Amélie,” Nothing More was Cuba’s official entry for the 2002 Academy Awards, although it did not make the final list of nominees. Recognized in the Cuba film industry for its visual style, Nothing More was shot entirely in black and white, but has hints of color throughout. “I don’t know how to make anything that’s not Cuban,” Malberti told havana-cultura.com. “I’m more and more interested in Cuban culture—in our roots, what we were, what we are, what we will be.” $5-$10, 7-9pm, San Antonio Museum of Art, 200 W Jones Ave, (210) 978-8100, samuseum.org. —KM 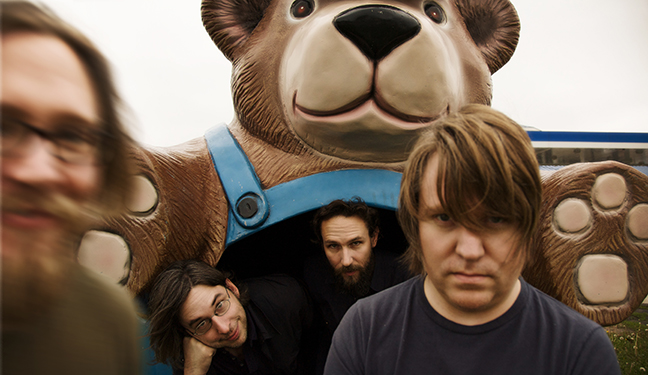 Denton’s Centro-matic have been on the folk-rock grind since their debut release Redo the Stacks. Singer Will Johnson is so good at the folk-rock fusion that he was inducted into M. Ward, Conor Oberst and Jim James’ Monsters of Folk band. In 2012, the quartet released 24 Songs, a free sampler featuring a couple of tracks from every album they've recorded over the past 17 years. On Friday Centro-matic plays Sam's in anticipation their 11th effort Take Pride In Your Long Odds, which is set to drop on June 3. $10-$45, 9pm Friday, Sam’s Burger Joint, 330 E Grayson, 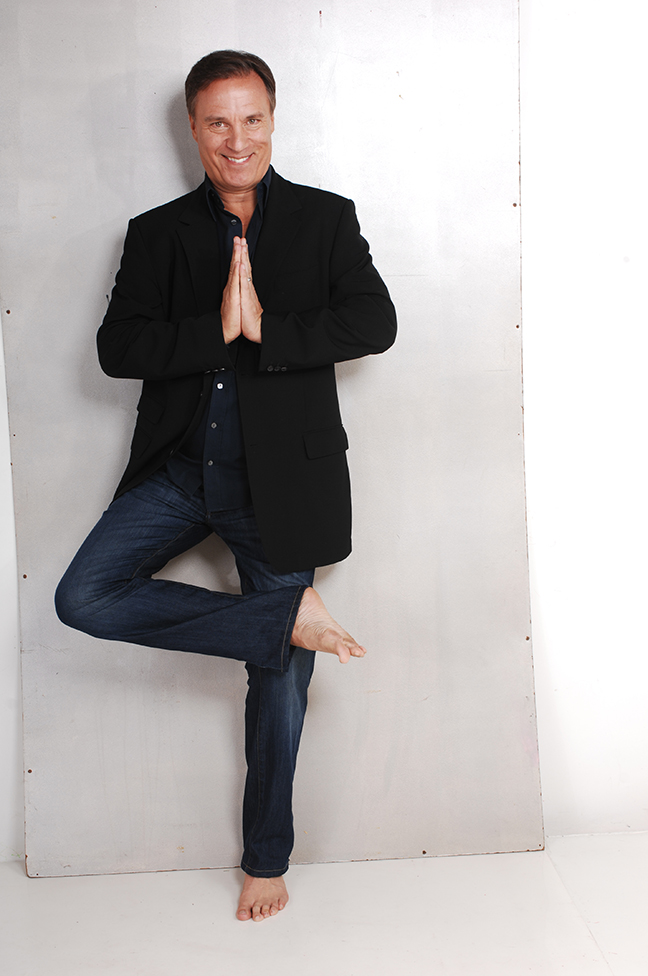 Do you want to think, or do you want to giggle and go “whoo!”? Far be it from us to guess at the true motivations behind any work of art, but it’s possible Philadelphia native Craig Shoemaker’s “Lovemaster” schtick isn’t so much a subtle commentary on human relationships as it is a bunch of peepee jokes delivered in a silly voice. “To hell with YouTube, how about my tube? That’s right, baby, yeah,” sayeth the Lovemaster in what is not, thankfully, an Austin Powers impression. Shoemaker does, however, impersonate Don “Barney Fife” Knotts both having sex and getting high to break up his rapid-fire observational comedy and road-honed crowd-work. In other words, he’s the kind of high-energy, old-school, laughs-per-minute club comic who’s probably at his best when there’s a bachelorette party in the audience. $20, 8pm & 10:15pm Fri-Sat, 8pm Sun, Laugh Out Loud Comedy Club, 618 NW Loop 410, (210) 541-8805, lolsanantonio.com. —JM

For nearly a decade, artist and educator Kyle Olson has operated a multi-purpose studio in Seguin. Through jobs at Blue Star Contemporary Art Museum and Austin’s Flatbed Press, Olson developed a network that brought a wide range of projects (from framing and crating for traveling exhibitions to making silicone molds for bronze castings) to the studio, which is outfitted with a woodshop, a darkroom and printing presses. Based partly on finances and the demands of his full-time job in the art department at Texas Lutheran University, Olson’s decided to vacate the studio; Houston artist Tommy Gregory has stepped in to help organize a pop-up exhibition with a portion of proceeds benefiting the big move. Referencing with its title the goings-on at the nearby Guadalupe County Court House, “Serving Papers” rounds up works by 18 artists, including Jimmy James Canales, Casey Arguelles Gregory, Megan Harrison, Justin Parr, Katie Pell and Marshall K. Harris. Free, 5-9pm, Kyle Olson Studio, 112 W Court, Seguin, (210) 693-0073. On view by appointment through June 7. —BR 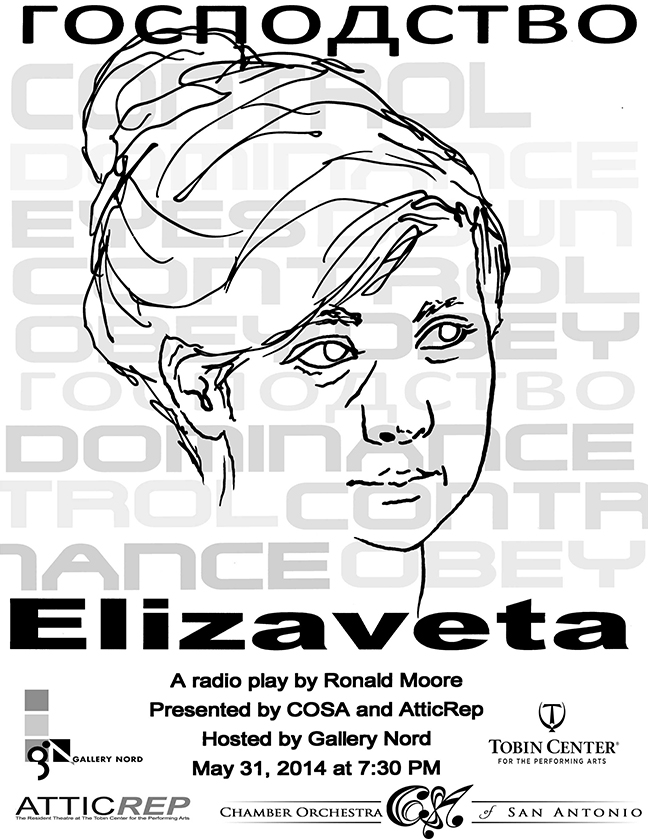 In anticipation of their new home in the Tobin, Chamber Orchestra of San Antonio and AtticRep theater company team up for a one-night-only performance tailor-made for “art integrationists.” Directed by Roberto Prestigiacomo and set to music by Wagner, Rachmaninoff, Schumann, Prokofiev, Webern, Shostakovich and Debussy, playwright Ron Moore’s Elizaveta jumps from the present to the past as it celebrates the anniversary of the fall of the Berlin Wall and explores “the tangled lives of artists, everyday persons and the government in communist Russia.” First in a series of plays, Elizaveta draws from curious sources: Harold Pinter’s one-act drama A Kind of Alaska, which follows a woman with “sleepy sickness” and is inspired by Oliver Sacks’ book Awakenings and August Strindberg’s The Stronger, a short dramatic work revolving around an awkward encounter between two actresses—chatty Mrs. X and silent Miss Y. $45, 7:30pm, Gallery Nord, 2009 NW Military Hwy, (210) 223-8624, chamberorchestrasa.org. —BR 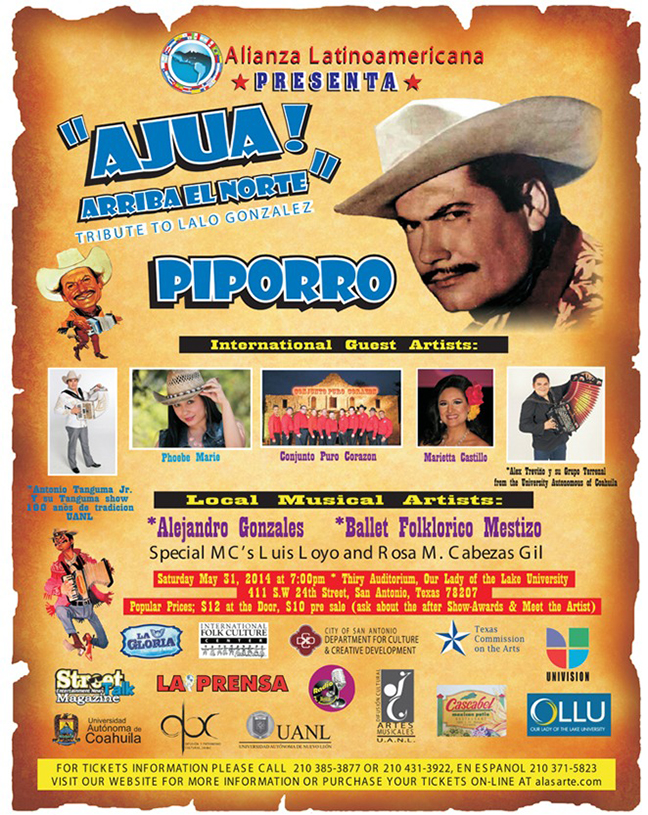 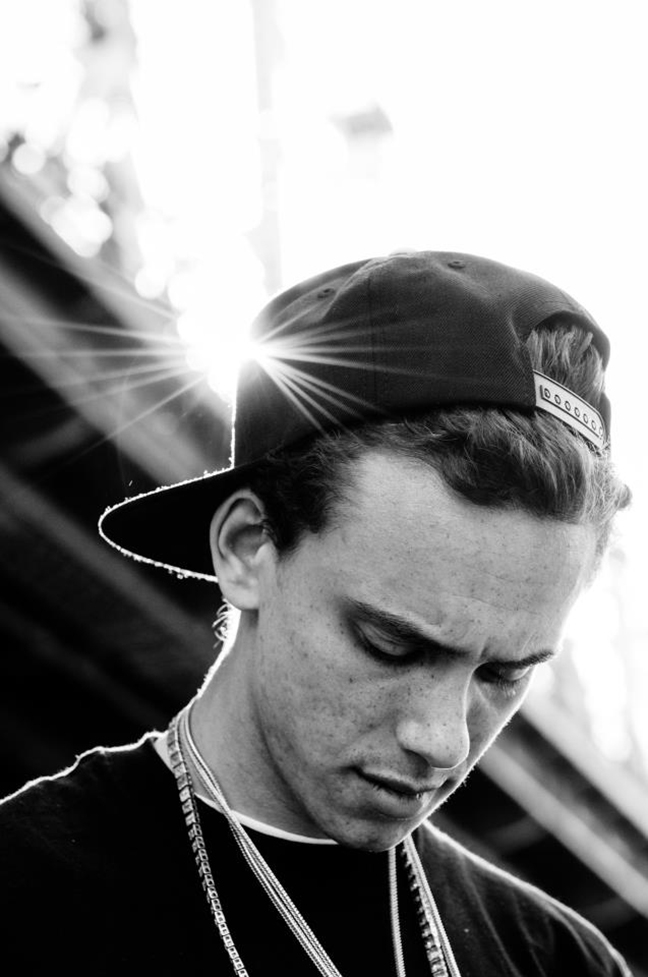 XXL 2013 Top Freshman alumnus and avid Frank Sinatra fan Sir Robert Bryson Hall II, best known as Logic, is a unique and underappreciated force in today’s hip-hop milieu. With four mixtapes to his name, at this point Logic has more than proven his skills as a rapper and producer, particularly with 2013’s stellar Young Sinatra: Welcome to Forever. Logic is possessed of the rare ability to write non-sequitur-bloated, hyperbolic raps alongside deeper, more lyrically rich companions. There are playful sub-currents of self-depreciation and rap criticism in his songs, and even the bangers don’t always totally sell out or buy in. This Saturday, catch the young lyricist live as he ramps up to his first proper release due later this year, the While You Wait EP. $17, 8:30pm Saturday, The White Rabbit, 2410 N St. Mary’s, (210) 737-2221, ticketfly.com.