My Life as a Zucchini arrives in town with a boost from the name recognition afforded by its recent Academy Award and Golden Globe nominations for Best Animated Feature. (Those of you who voted in your office Oscar pool know what I mean.) This French movie uses remarkably expressive stop-motion animation to create an honesty and sense of whimsy that help offset the darkness of the intrinsic story.

The film by first-time feature director Claude Barras looks a bit like the work of a European Tim Burton. But as with Burton’s animated night terrors, parents planning on bringing a child should consider whether the youngster is old enough for the material. This is a story about a boy named Zucchini who lives in an orphanage, but unlike in Annie or Despicable Me, the traumas that caused each kid to be sent away are front and center. Zucchini (voiced by Gaspard Schlatter) becomes an orphan when (Note: I’m not spoiling much here because it occurs in the first five minutes, and parents do need to take this into account, but stop reading here if you wish to be surprised) he accidentally kills his mother during one of her alcoholic rages. Zucchini takes an empty beer can with him to the orphanage as a souvenir. The other kids come from equally disturbing backgrounds in which their parents are junkies, thieves or sexual predators; one has parents who were deported, and another witnessed her parents’ murder/suicide. It’s small wonder these kids can be seen reading Kafka. 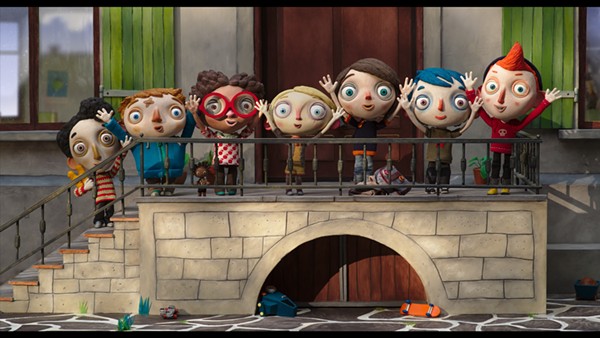 GKIDS
The movie is based on Gilles Paris’ novel Autobiographie d’une Courgette, and the screenplay is by Céline Sciamma, director of the bracing coming-of-age dramas Tomboy and Girlhood, both about marginalized girls. Unlike stereotypical movie orphanages where children suffer from neglect and abuse of various sorts, the residential home where Zucchini is sent is a loving, kind place. In My Life as a Zucchini, hell is where these children resided prior to coming to the orphanage, not after. Life becomes better once they arrive at the group residence. Furthermore, they form bonds with one another, as well as with their guardians and teachers, evolving into a new family unit over time. And the policeman Raymond (Michel Vuillermoz) who so sensitively interviews Zucchini after his mother’s death becomes more of an unceasing social worker on the boy’s behalf than cop. The lesson? Most people can be very good, but some parents can be very bad. Still, Zucchini softens some of the story’s intrinsically harsh edges, and also offers an impossibly idealistic ending. But only an adult might quibble. The big-eyed children of My Life as a Zucchini have already seen enough.

My Life as a Zucchini opens Friday exclusively at the Santikos Bijou in two formats — French with English subtitles or dubbed into English with voices by Will Forte, Nick Offerman, Ellen Page, Amy Sedaris and Erick Abbate, among others.