Abbott, who is paralyzed from the waist down, said he can kick better than the Cowboys' Brett Maher. 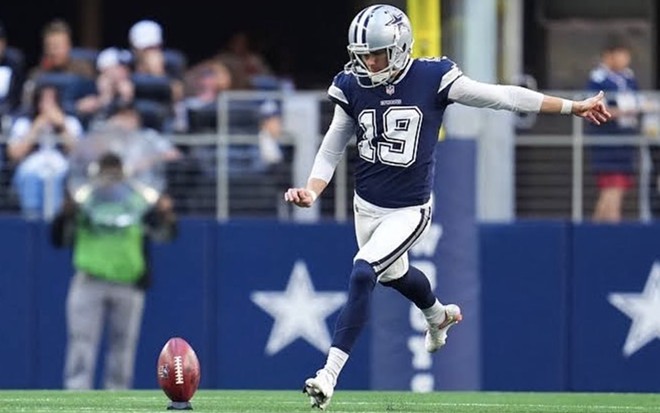 Instagram / brettmaher19
Dallas Cowboys kicker Brett Maher's extra point attempt was blocked during their match-up against the San Francisco 49ers on Sunday.
Dak Prescott once again showed why it's tough to be a Cowboys fan after "dem boys" blew their playoff run in the final seconds in a bizarre way only America's team could pull off.

Although there's plenty for Cowboys fans to be pissed off about this morning, the most bizarre part of the game came in the first half and didn't even come from a player. Instead, it involved Texas Gov. Greg Abbott.

During the first quarter of the NFC Divisional Playoff game against the San Francisco 49ers, an extra-point attempt by Cowboys kicker Brett Maher was blocked. Maher missed four consecutive extra point attempts during the NFC Wild Card game against the Tampa Bay Buccaneers last week, so missing another extra point this week quickly led to criticism on Twitter, including from Abbott.


I swear, I can kick as good as the Dallas Cowboys kicker.

"I swear, I can kick as good as the Dallas Cowboys kicker," Abbott said in a Sunday night tweet.

Abbott has been confined to wheelchair since a tree fell on him in 1984 and crushed his spine, according to a Dallas Morning News report. Needless to say, the governor can't kick much of anything.

Others clapped back, however, roasting the governor for his record in office. User @BoxingnBBQ said Abbott "can't even kick on the light switch for us in the winter," referring to the ongoing problems with the Texas electrical grid.


You can’t even kick on the light switch for us in winter.

He kicks about as good as you maintaining the state’s electric grid.

Twitter user @BurnerBuddah suggested that Abbott and Maher switch jobs, adding that the Cowboys kicker "can't be any worse a governor than you."


Maybe you can switch jobs. He can't be any worse a governor than you.

The Cowboys lost 12-19 Sunday night. The San Francisco 49ers will advance to the NFC Championship game, where they will play against the Philadelphia Eagles.