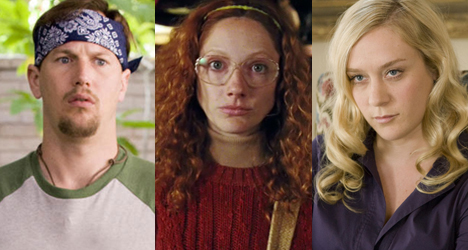 In the dark comedy Barry Munday (released on DVD and Blu-ray Dec. 7), actor Patrick Wilson (Little Children) plays the title character, a douchebag stuck in the ’90s, who wakes up in the hospital to discover he no longer has testicles. A homely-looking Judy Greer (13 Going on 30) chimes in as Ginger, a past lover who swears the baby she is carrying is his. Chloë Sevigny (TV’s Big Love) is Ginger’s more attractive sister Jennifer, who bats her eyes at Barry because she can. Barry Munday never hit theaters in San Antonio, but I was able to sit down and talk to the cast for a few mintues last March during the 2010 South by Southwest Film Festival. Chloë, what was it about this movie that made you want to be a part of it?

Chloë Sevigny: I had never been in a straight-up comedy before. It’s something I had wanted to do for a long time, but never really had a lot of opportunities presented to me. I was also a big fan of Judy [Greer] so I just jumped at this opportunity.

Was it easy for you to change gears and get into comedy mode?
CS: It was very challenging and sometimes intimidating especially since these two (Judy Greer and Patrick Wilson) were so funny. Playing the role on Big Love on HBO for so long, you get comfortable there. I haven’t been doing a lot of films lately because of scheduling with the show, so being in a movie like this is so terrifying because I’m out of my comfort zone. Judy, how much input did you have in creating the look of your character. The frizzy hair is pretty wild.

Judy Greer: I think the wardrobe and the glasses were enough. I mean, this girl just really doesn’t care. She wasn’t trying to force this look on herself. It’s just that she didn’t give a shit.

What about you Patrick? I haven’t seen a braided belt in a while. Patrick Wilson: We just started building on it from the outside in. There were such strong characters on the page. I knew right away when I talked to [director] Chris [D’Arienzo] I knew I needed to wear puka shells and a braided belt. Once we established that he was hanging onto the early 90s – around the time he was in high school and probably the last time he felt cool. Then I sort of based his movements on someone who, when he hit on women, was completely awkward and not smooth. I based him on a couple of people, but I would never say who. Is that where you got the walk? PW: Well, the walk came from a couple of things. I knew this guy who would always walk and lead with his chest; sort of like a gorilla. It’s like someone trying to be as manly as he can be and then all of a sudden his manhood is taken away. We were on a time crunch with this movie, so we had to make these decisions and go with it. In the first few days you’re really thinking, “I hope this works.” Judy, did your look allow you to feel more like your character?

JG: I think you see a lot of times in movies when characters go through a physical change. I just didn’t want it to be about that. I did want my character to fall in love and then say (in a snooty voice), “Now I have to be beautiful because I’m in love.” Barry makes her happy. He doesn’t change who she is. I think the most my makeup artist let me use was some cherry ChapStick.

Patrick, Barry Munday and your 2005 thriller Hard Candy are totally different films, but did it worry you at all that your genitals were back in the spotlight again? PW: Well, emasculation is definitely a theme. There is a similarity there, characters are always looking for an arch in what they gain and learn. I’ve done every variety of the emasculated man even in Little Children. I’ve actually been very lucky to get these kinds of characters.