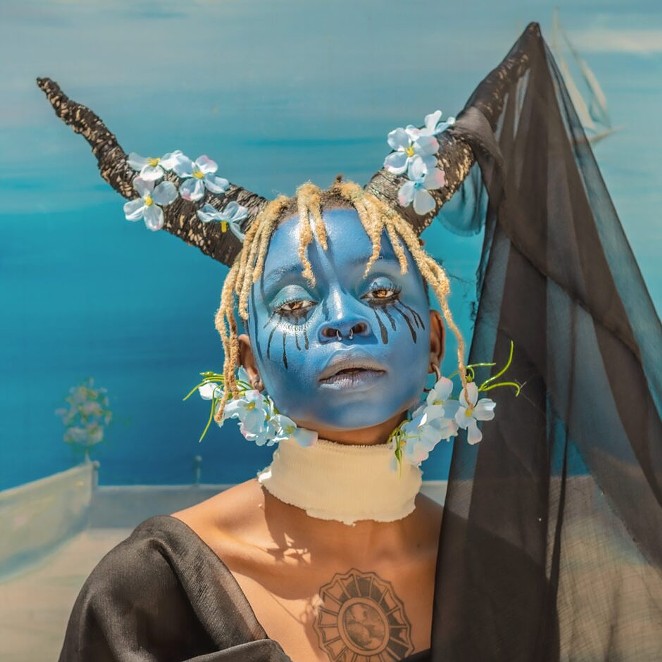 Wandile Xaba
My Ancestor, the Serpent, Wandile Xaba
After Femi Ogunleye graduated from UTSA in 2011 with an undergrad degree in international business, he returned to Nigeria, where his family is originally from, to deepen his connection with its culture and heritage.

As part of that immersion, he began collecting artwork, bringing pieces back to San Antonio.

“I would travel back to the U.S. with the art, and people started to become interested and wanted to know more,” Ogunleye said. “I became a sort of intermediary between the artists in Nigeria and art collectors in Texas.”

More recently, Ogunleye — through his nonprofit organization Ólàjú — exhibited the works of photographers from across Africa at the Brick at Blue Star Arts Complex in late January and February.

"Perspectives from Within: A Collection of African Photography" is still available through the end of the year via a virtual exhibition at the Ólàjú website. The online show features work from eight photographers from Morocco, Nigeria and South Africa.

Currently, Ólàjú’s focus is on showcasing on the work of African photographers because of the challenging logistics of shipping paintings and sculptures.

“There is a huge underrepresentation of African arts,” Ogunleye said. “Not many people have seen African arts presented in a gallery setting. It is really a cross-cultural exchange.”

Part of the reason Ogunleye started Ólàjú was to raise awareness of African arts and help shed the misconceptions and stereotypes that people might have about artwork from a continent they are not as familiar with when it comes to its cultural contributions.

“Some people even question the legitimacy [of the art],” he said. “When you present the work, some people are like, ‘OK, why is this here?’ So, I use that as an opportunity to speak about the Black history in San Antonio, so people can start making the connection.”

For the exhibitions he curates, Ogunleye said he is looking for “young, emerging artists” who are on the “cusp of breaking ground.” He also gravitates to artists who are “pushing certain narratives” about their African culture and identity.

“I want the work to be thought-provoking and different than what we’re used to,” he said. “All the photographers in ["Perspectives from Within"] have a great eye for their subjects.”

Eno, a visual artist from Enugu, Nigeria, said her work examines gender, sexuality and self-expression. Her six photographs in the exhibit speak to the stereotypical narrative of manhood in Nigeria. She hopes the work shows how diverse and complicated African society is, and that it’s far beyond the “lion and hut stereotype” or “Wakanda narrative” American audiences might assign to the content.

“The man is the ‘head’ of the family even if he has no leadership skills,” Eno said. “He is the sole provider even if he earns less. He must mask emotions to show a position of strength. These rules put the entire gender in a box and leaves a lot of men depressed.”

Xaba, a photographer from Umlazi, South Africa, who identifies as a queer activist, said she uses her photography to rewrite her traumatic history as a queer Black woman.

“I critically look at how Black bodies have been perceived historically, in relation to the colonial gaze,” Xaba said. “I wanted to reverse that presentation to better suit the Africa that I live in with a focus on my South African context.”

Xaba wants her work to start new conversations and provoke questions such as, “Who is looking?” “Who is the subject staring at?” and “Who has the power within an image?”

“I want my photographs to provide a chance to engage with societies’ perceptions while also challenging one’s perspectives and assumptions,” she said. “Africans are usually portrayed as stereotypical binaries. It is quintessential that African people tell intrinsic stories to avoid the danger of the single narrative.”

"Perspectives from Within" can be viewed online at olaju.org.