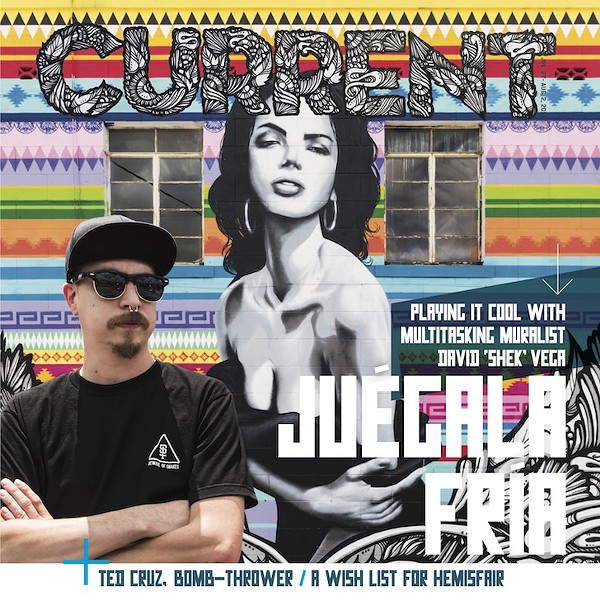 David “Shek” Vega is a man possessed of a perpetually molten creative core.

At 35 years old, Vega, who got his real start and earned his deepest lessons as a graffiti artist on San Antonio’s South Side, is a sought-after muralist, a successful contemporary artist who has adroitly carried his San Anto street art style to fine art fruition, a noted gallery owner and curator, and an important mentor and friend to artists who lack proper support, space and respect for their work. Opened in 2011, Vega’s Gravelmouth Gallery (1906 S Flores St.), in which he displays his own creations and curates increasingly excellent group and solo exhibitions, has turned plenty of heads, including those of San Antonio Current readers, who often place the gallery in the top tier during our annual Best of San Antonio poll.

This year, amid celebrations for the gallery’s fifth anniversary, and several other projects, Vega has worked with his longtime friend, mentor and frequent collaborator Nik Soupé on murals for the San Antonio Spurs and guest curated the 21st annual incarnation of Austin’s Mexic-Arte Museum’s esteemed Young Latino Artists exhibition (YLA 21: “[email protected]”). Vega also contributed a bright and cheeky, Spanish-English mural to Mexic-Arte’s outer wall, reminding passersby to “juégala fría” (“play it cool”) as temperatures and tempers heat up this summer.

Thoroughly impressed by the Vega-curated YLA 21 exhibition — which exports the San Anto aesthetic to ATX via seven SA-affiliated artists among the group’s eleven — we came to the conclusion that this is the moment to tell Shek’s story. It’s a San Antonio story about the view from the outside and how, even when it pisses you off (probably, especially when it pisses you off), it can be your most powerful weapon. Recently, I spent a late morning at Gravelmouth with Vega and we talked about all that’s poppin’ for him and his affiliates; we talked about graffiti and biases and cops; we talked about art and college and heart; we talked about the future. But first, we talked about the spark — the spark of his creative passion and how he eventually taught it to blaze. I found the artist candid, passionate and warm, with a decided air of the type of wisdom that cuts through the bullshit.

Drawing and art were always a part of Vega’s life, for as long as he can remember. But, in third grade, when a teacher who’d noted his talents handed him a Pablo Picasso book, “as cliché as that might sound,” he was ignited in a certain special way, enamored with how “different, odd and unbelievably free” the precocious modern master’s work felt. Driven to express himself in the visual arts, yet feeling under-challenged and underserved by the opportunities to grow as an artist in his school setting, Vega turned to graffiti at age 13, seeking to show his heart, and thus establish his own identity and presence, on the gallery walls that are the city itself.

And from that point on, even as he honed his craft late at night, waiting for a perfect moon-washed canvas, Vega began to feel, without being wholly conscious of it at first, the class lines that have traditionally divided the art of the people from the art of the establishment. Let’s put it this way: Even though his parents, who worked hard for him and his sister, were always supportive of his art, “they couldn’t know really just how much experience and practice [he] was getting.” For Vega, this kind of vigilante street art was a way to grow and, as he saw it in his teen years, a way to “do something that mattered, something to make a name for yourself,” figuring “you might not live past 25.” And, as an impossibly young graffiti artist, Vega certainly did make a name for himself.

Shortly after the year 2000, Pepsi released a graffiti in action-style commercial featuring Vega and Soupé at work (for their Pepsi Sí campaign) and Vega, at Soupé’s behest, took his first forays into canvas work for gallery exhibition. Though things looked up for the young and ever more skilled Vega, the next 10 years were fraught with the kind of things associated with a slow climb up unfriendly slopes. While a solo show (2004) along with work featured in Contemporary Art Month (2005) and a Vice magazine group show in Austin (2006) bolstered Vega’s confidence and profile, it was, and is still, hard for artists with street art roots to be accepted by the broader art establishment.

“Graffiti artists deserve respect,” Vega complained, “they are literally risking their freedom to create these works of art. That deserves respect from people who love art.” He added, “Graffiti is homegrown, it grows inside our communities and individuals.”

Taking a broader view of the San Antonio art establishment, Vega continued, “I mean, there’s a lot that you have to dismiss if you’re only looking for artists with degrees.” (Which is apparently a real thing.) “There are a lot of artists just like me, doing graffiti-inspired canvases, street art-inspired canvases, unique stuff, and being rejected by the street art community because it’s not on the walls and by the art establishment because it’s not considered fine art.”

As he’s become increasingly successful, Vega has received some pressure to distance himself from that street laboratory where he performed his most important experiments. “People try to get me to teach classes and tell people not to do graffiti,” he explained, “but I really can’t tell people not to do graffiti, because if it wasn’t for graffiti I wouldn’t be where I’m at today.” Instead, Vega wants to show young graffiti artists that there is a pathway to eventually do something different with their art “when they’re ready.” Still, regarding any possible clandestine art adventures in his own present life, Vega was quick to dismiss: “No, no. I’ve done my time out there. It’s someone else’s turn.”

Since founding Gravelmouth in 2011, Vega has enjoyed a well-deserved upswing in popularity and critical respect. He’s also developed his style into a rambunctiously refined fine art-street art hybrid that seems to emerge from his canvases and desecrate the white gallery walls with colorful reminders that the streets are still right here, and no one should get to feeling too complacent. His art is always clever, always forward-thinking, in turns bright and loud or muted and subtle. He’s not always looking to make a political statement with his works, but when he does, he hits his mark hard. At the moment of our visit, one of the striking figures haunting Vega’s gallery walls, in the 2015 painting Identify Yourself, is a shirtless vato borracho, paper bag-encased poison in hand, sporting devotional tattoos to consumerism’s siren call (Mickey Mouse), to the Catholic faith (Our Lady of Guadalupe), to a distant indigenous identity (pre-Columbian pyramid), and to his beloved home state (Texas, writ in shaky Old English font). Behind him, like a wall of brightly-colored city noise, are scrawled the words in which the man has failed to find a complete identity, the socio-linguistic constructions whose boundaries he’s been unable to stay within: “Mexicano,” “Latino,” “Hispanic,” “Tejano,” Chicano,” “Americano,” “Mestizo,” “Other.”

With Soupé, and occasionally a few other artists, Vega founded the muralist group Los Otros (the others or the outsiders) when, upon being commissioned to paint the mural adorning the Current headquarters, he realized he needed help he could trust to dig his vision and match his execution. Since completing that first one, Los Otros has created more than 20 murals in San Antonio and elsewhere (Detroit, D.C., Houston), basically averaging nearly a mural a month. Surely you’ve seen the Luminaria mural featured on this week’s cover, or one of the Spurs murals (on TV, all fancy), or the one at The Mix or Bottom Bracket Bicycle Shop.

The opportunity to curate the YLA 21 show at Mexic-Arte, and that show’s overall excellence, is just the latest in a string of wins for Vega, who maintains his cool through an “anxious” need to hurl himself into new work — dude also works 40 hours a week at the party supply wholesale shop his family owns, no big deal. By staying busy bringing new talent to Gravelmouth and doing his own work, he’s able to overlook the fact that he still feels “like an underdog” and to channel any anger that may arise into feeding his valiant work ethic.

Vega explained his curatorial aims with the YLA 21 show like this:

“These are young artists from different places, working in different mediums, with different types of educations and they come at the same questions of identity in wild ways. The question is where do we stand now? How far does [[email protected] identity] spread out and how many ways are there of telling your story and doing your work? Did you cook tortillas with your mom or abuela? Good. Did you watch Teenage Mutant Ninja Turtles? Well, good. People are finding new ways to live and express themselves.”

With regard to constraints on his curatorial process, Vega was pleased with his freedom in choosing the artists and pieces he really wanted for the exhibition, further proof of the trust the museum has in his vision and taste.

When I asked about the near future for Vega, he predictably seemed flabbergasted by the mere task of mentioning all that’s going on with the ever-improving gallery and his own projects. So, I asked him how he curates for Gravelmouth and what he wants to see happen there. His answer pretty much sums up why this is a guy you’ll want to start paying attention to:

“The gallery is an extension of myself really, to put it in kind of a selfish way. I want to bring light to street art and artists from where I am from, but I also just want to display innovative things that catch my eye or that I think might be something San Antonio needs to see. I do want to ruffle feathers and surprise people. It’s like getting dressed in the morning. What speaks to me? How do I want to represent myself and my community to the world? Also, I try to pick up some of the pieces that the rest of the local art community finds a reason not to showcase.”