San Antonio native Ally Brooke also will sing the national anthem for the game against the Golden State Warriors. 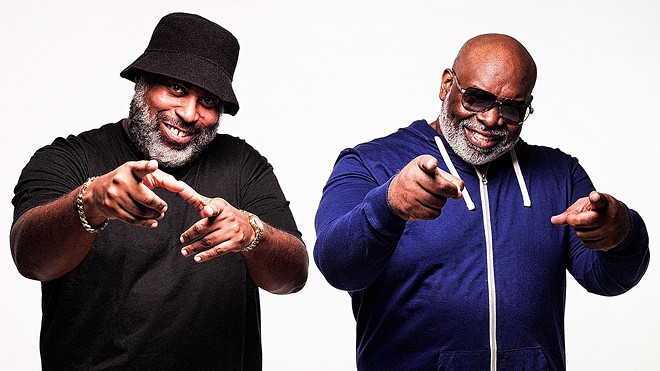 Wikimedia Creative Commons / Dcgottaeat
Tag Team, who had a monster hit with "Whoomp! (There It Is)" in 1993, will provide halftime entertainment for the game.

With just over a week until the San Antonio Spurs' return to the Alamodome for the team's 50th-anniversary game, the Silver and Black have unveiled a number of nostalgia-inducing details about the event.

First, Tag Team — the '90s rap duo known for the all-too-familiar hit "Whoomp! (There It Is)" — will perform during halftime, according the Spurs organization. "Whoomp!" grabbed the No. 2 Billboard slot for 1993, the same year the Spurs relocated to the Alamodome from aging Hemisfair Arena.

But 30-year-old radio hits aren't the only nostalgic detail that will be part of the Friday, Jan. 13 showdown with the NBA Champion Golden State Warriors.

During the national anthem — which will be sung by San Antonio native Ally Brooke — two San Antonio river barges will appear courtside as a tribute to past river parades celebrating the Spur's five NBA Championships.

Ahead of tip-off, the Spurs also aim to blanket the Alamodome in a sea of turquoise via semi-transparent Fiesta-colored stickers the team will provide to cover attendees' cell phone flashlights.

Fewer than 10,000 tickets remain available for the Alamodome game. The Spurs are hoping to blow past the previous NBA attendance record of more than 62,046 set by the Atlanta Hawks when they hosted the Chicago Bulls in 1998.