Behind Bars: San Antonio wine pro Scott Ota aims to educate, one glass at a time

Ota has emerged as one of San Antonio's most-celebrated sommeliers. 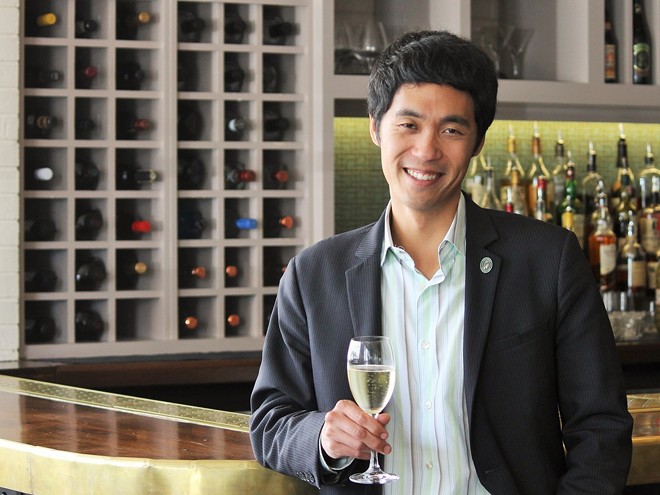 John Davenport
Ota's next big step is opening a wine bar of his own by the end of 2023.

While a marketing student at Texas State University in San Marcos, Scott Ota needed a job to help cover his expenses. He got a job as a busser and dishwasher at a local restaurant.

With no thoughts of making the hospitality business a lifetime thing, he relocated to Austin for its vibrant music scene and played for a while in a band. Then reality set in.

"It was clear this wasn't going to be a professional career," Ota said.

Impressive, especially considering he reentered the business at the bottom. Unable to land a job with a high-end restaurant, Ota went back to dishwashing and a slow steady climb through the ranks. He waited tables and did a stint at steakhouse before he eventually landed the chance to delve into wine as a sommelier and wine captain at The Driskill Hotel. A French bistro and a rustic Italian place followed.

"I got some awards," he said, modestly.

All the while, through study and on-the-job experience, Ota's wine knowledge increased exponentially. He passed two levels of a prestigious wine certification program with the highest scores in each corresponding year and was named Best Sommelier in Texas in 2013.

Dishwashing was well in the rearview mirror. Apparently, so was marketing. But the urge to further educate both himself and his customer base wasn't.

In 2016 Ota got a call from the folks setting up what was to become High Street Wine Co, at San Antonio's Pearl development. He landed the job of general manager and beverage director, overseeing an impressively assembled list of more than 450 labels.

During his stint at High Street, it became clear Ota knew a lot about wine. He was also more than willing to share — but he wasn't about to inundate customers with erudition. Newbies and know-it-alls were all welcome during his nearly six-year tenure.

An urge to step outside the box in both flavors and presentation — to "change up the culture," in Ota's words — led him to a recent move to Pharm Table to work with chef-owner Elizabeth Johnson.

In doing so, he became the only top-level guy in an otherwise woman-run establishment. That, along with the restaurant's mostly vegetarian and ayurvedic cuisine, exerted a profound influence on his approach to developing the still-small wine list. For starters, he's concentrating on natural wines produced by women winemakers and vineyard owners.

Ota's urge to educate is still at the forefront. He hosts wine classes every month or so, and a beverage crash course he developed for Pharm Table staff would be a great introduction to wine, beer and ciders for anyone simply wanting to more about what they consume.

Sometimes using metaphors from a music career abandoned, the instruction covers anything from climate and flavor components to production techniques and maturation — all concluding with tasting exercises.

"What gives me the greatest high is when staff passes teaching on to clients," Ota said.

It's no accident that terms such as "values" and "ideals" recur frequently throughout the multi-page document on which Ota's course is based.

Values and ideals will be foremost in Ota's next big step: opening a wine bar of his own by the end of 2023. Though he's not yet ready to reveal details, he's already selected a Southtown location, developed an architectural plan and a drinks menu based on an art-museum model that features a "permanent collection" on one side and "rotating special exhibits" emphasizing certain regions, grapes or styles and concepts on the other.

Behind it all is a set of goals emphasizing authenticity and storytelling. He plans to offer thoughtfully paired food, but wine will be the focus. And the presentations must mix. Pairing sherry with salsa dancing, for example.

"The best wine experiences are to be had at the source," Ota said. "I want to take some of that and build it back here."

It's not for nothing that he has an "In Vino Veritas" tattoo on his forearm.

Ota's future wine bar already has a name: Second Growth. The term refers to wines produced by the prestigious vintners of Bordeaux whose formally designated "first growths" are among the world's priciest and most esteemed wines and properties. Produced with the same care, and often with the same grapes, second-growth wines are generally less expensive and considered relative values.

Those wines are occasionally promoted to first growth, suggesting a kind of redemptive aspect of the term.

"I want to emphasize the 'growth' aspect of the name," Ota said.

That includes growth of the customer base and its knowledge, of the concept to other locations and of the staff. To this end, the new bar will have a physical space devoted to education.

Not physical, but no less tangible, Ota also is establishing a nonprofit initiative for servers based on restaurant lingo "full hands in, full hands out."

In restaurant terms, that means when you're going back to the kitchen, clear some dishes and take them with you, and when you're coming out with an order, consider taking additional items such as glassware for restocking. It's about efficiency.

The organization will concentrate on employee health insurance, higher wage opportunities, scholarships and even addressing addiction, an industry-wide issue, according to Ota.

Ota will have his own hands full for some time to come. But that doesn't stop him from contemplating a more-distant future in which he's focused on being a wine educator, perhaps a wine importer and getting a job in a winery while "in retirement."

In other words: Ota isn't planning on retirement.