The restaurant's holistic menu has no trouble featuring both ultra-meaty carnitas and dried hibiscus blossoms. 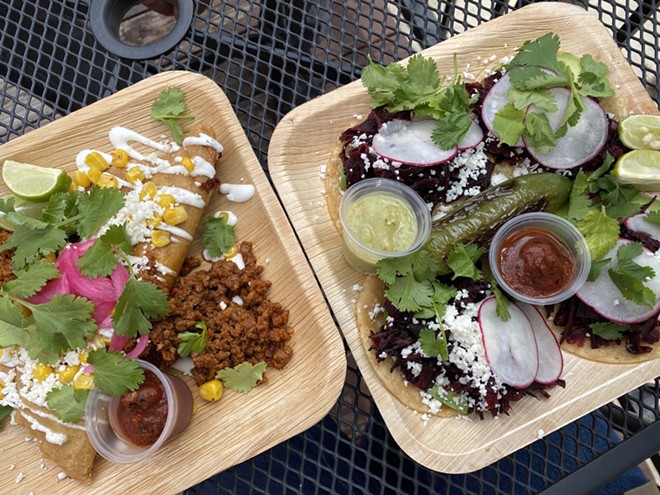 Ron Bechtol
Milpa at The Yard is a modest dining spot set in a literal boxcar.

If you're curious about the history of tacos árabes, the specialty of Chef Jesse Kuykendall's Milpa at The Yard, the well-trained staff will be happy to oblige.

Just as a teaser, they involve the city of Puebla and Lebanese — some say Iraqi — immigrants reinventing a traditional Middle Eastern food in a new setting. While we're at it, we might as well also discuss the term "milpa." It refers to a cornfield in which squash and beans may also be planted in a kind of synergistic mix.

None of that is essential to the enjoyment of the food at this modest dining spot set in a literal boxcar — there's also a food truck that can regularly be found at Amor Eterno in Southtown — but it does help explain a holistic menu that has no trouble featuring both ultra-meaty carnitas and dried hibiscus blossoms.

Returning to the árabes, I can't resist adding this commentary from the Serious Eats website: "It didn't take long, in a country already enamored of wrapping meats and other savories in a soft corn tortilla, for the taco and the shawarma traditions to collide. The lamb quickly became pork, and the classic Middle Eastern yogurt sauces were joined (and then, often, replaced by) spicy Mexican chipotle sauce. The marinade for the meat, meanwhile, remained fairly similar to the Levantine original, heavy with cumin, oregano and onions. It's hard to say whether the taco was shawarma-fied, or whether the shawarma was taco-fied — that's perhaps an existential question with no real answer ..."

Milpa comes down more on the shawarma side of things. The sauce is like a tzatziki with crisp, chopped cucumber blended into tart Mexican crema. The small flour tortillas, custom made by Adelita's Tamales and Tortillas, contain no lard, though you'd never know it. The pork they cradle is saucy and herbal. A bright flash of the house's incendiary chile de arbol sauce adds welcome contrast.

I wasn't quite as impressed by the tacos de carnitas, presented on puck-sized corn tortillas — also by Adelita's and made from Texas corn. The rendered pork had good flavor, and it was nicely balanced by marinated onions fragrant with Mexican oregano, but it came across a little dry after the lush creaminess of the árabes.

Carnitas are available at multiple places around town, however. Tacos de mollejas, not so much. Grab Milpa's while they're hot out of the fryer. The plump morsels of sweetbreads manage to be both crispy and creamy at once, and they're irresistible with another jolt of that salsa roja. The tomatillo-based salsa verde is also perfectly fine, just not as tongue-tingling.

Moving away from meats, the quesadillas with Oaxacan cheese are a logical first step on the way to a vegan finale. Milpa mixes its own masa for these, then fries the half-moon parcels for a crunchy bottom that contrasts appealingly with the sturdy cheese filling. It's also available with a vegan, cashew-based "mozzarella." If you order the quesadilla with chorizo, as we did, the crumbled sausage will cap the package in a way that doesn't leave a rusty trail of grease in its wake. Sprinkles of corn and lashings of crema complete the composition.

The corn that accented the quesadilla can, and should, also be enjoyed with a full side of esquites — lightly grilled to a pleasantly chewy texture, slathered with crema and mayo, and dusted with queso fresco. Vegetarians — and curious carnivores — rejoice.

The accompanying charro beans made no attempt to be anything other than bacony and lacked the conviction of most other menu items. No yawns greeted the spicy mushrooms, however. They're grilled until almost caramelized, make for a good vegan option, and are fine on both corn and flour tortillas.

But for a full-on plunge into the vegan universe, the quartet of tacos with flor de jamaica are a must-try. Many South Texas diners are familiar with jamaica in the form of an agua fresca. Cocktailians may also know that a syrup made from the dried blooms adds both magenta color and a tartly fruity edge to harder drinks.

But rehydrated, sautéed and paired with caramelized onion, a little avocado and sliced radishes? Count me among those unaware the flower could star in a savory dish. There's a nice "tooth" to the texture, and the flavors skew lightly floral, although the onion adds the requisite bass notes.

Have these tacos. They'll surprise you and may even open a door to further adventure in the corn patch of life.

Milpa at The Yard

The skinny: Street tacos with a college education are the stars of Chef Jesse Kuykendall's food truck spinoff, located in the boxcar-based culinary incubators at The Yard. Don't miss the specialty tacos árabes with their marinated pork bathed in a creamy sauce with cucumber and get bold with the vegan tacos de jamaica that make best use of dried hibiscus blossoms.