Leave Politics at the Door at Second Angry Elephant Bar 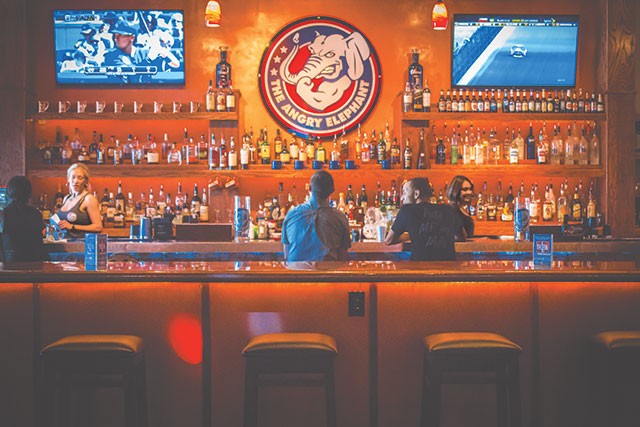 Tucked away in a corner of the Boardwalk shopping center (across from the Dominion) you’ll find a spot that always seems to be looking for its perfect tenant. Many an owner has tried to capitalize on this potentially lucrative space off Boerne Stage Road, and nearly all have failed. Notable attempts include Chango’s Havana Club, which extolled good drinks, good music and fine art, and Tony Parker’s Nueve Lounge, which was supposed to bring “New York to San Antonio.” The most New York thing about this area is the Subway sandwich shop just a few doors down.

The problem with these previous endeavors was that they were trying to exude class while existing in a strip mall. Who wants to pay a valet $15 just to see your car parked in front of a Double Dave’s and THEN pay a cover charge? Come on!

With its newest tenant, The Angry Elephant Cigar Bar, it looks like this location might finally have a keeper. And it’s all about the approach.

This Elephant is a refreshing change of pace from the overwrought, stuffy ambiance of its previous tenants. Benefiting from the alleged $40,000 Tony Parker poured into renovations when it was Nueve (beautiful woodwork, subdued track lighting, two posh bar areas, etc…), the space is nicely balanced by a bit of kitsch.

In keeping with the partisan theme found at its sister location off 281 North, images of political figures adorn nearly every wall of the Elephant. Up along a doorframe you have Reagan leaning, watching you drink; between two dartboards there’s Obama, depicted pounding some Guinness like an irresponsible frat boy. And in the “VIP” area, we have Teddy Roosevelt riding a moose. A fake photo, sure, but one that could win the internet some 95 years after TR’s death.

While the look has changed, the clientele remains the same as it ever was. Thirty- and 40-year-olds dressed in everything from polos to Spurs shirts (albeit nice Spurs shirts) dance the night away to surprisingly good live music (a festive mix of Top 40 and “classics” such as “Your Love” by the Outfield).

There is a good energy and vibe to the place and it only grows as the night wears on, no doubt aided by the impressive drink selection.

On the booze front, this pissed-off pachyderm is packing. The main bar is stocked with nearly every type and brand of liquor you can imagine, from Tito’s and Ketel One to Monkey Shoulder and Jameson. And if you love Knob Creek, well, so does the bar (or they really love the sales rep). If the Kentucky distillery produces it, chances are the Angry Elephant carries it. Rounding out the drink selection is the typical assortment of domestic and imported beers (bottles only), and a nice selection (20-plus) of red and white wines.

Bartenders, such as Kelly, were friendly, attentive and fired up a cucumber martini ($6) just as quickly as they did a Texas Kicking Mule ($8) (their signature drink made with Tito’s, ginger beer and jalapeño. It’s ice cold and has a nice bite, a drink for sipping). If your tastes skew a little sweeter though, try The Happy Elephant ($6). The Pinnacle gin, fresh-cut strawberries, basil and lemonade created a drink that tasted pleasantly like a Fruit Roll-Up.

Pro-tip: If the front bar is packed, the back bar ain’t no slouch. Not only will you find a decent selection of liquors, but house-infused choices as well. Some of the standouts include the infused tequila (habanero, cinnamon and ghost pepper) used for margaritas and the strawberry/peach-infused vodka they use for their martinis. Delicious.

Those looking to save on already decently priced drinks can take advantage of their happy hour specials between 2 and 7 p.m., Monday through Friday.

Finally, this is a cigar bar (every post-Chango’s place has been), and the smoking area is located in a small, secluded room just past the main bar. With prices averaging between $10 to $20 (some higher, some lower) and the 35-plus options, you should be able to find something to suit your taste. They even have infused cigars if you feel so inclined.

If you’re looking for a fun bar that doesn’t inflict its political inclinations any which way, head on down to The Angry Elephant. This one just might stick.